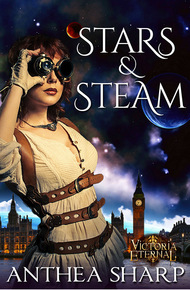 Steampunk with an intergalactic twist! Enter a fantastical world filled with alien spacecraft and Victorian sensibilities, formal balls and travel to the stars.

What if aliens had landed on the Buckingham Palace lawns in 1850 and presented Queen Victoria with a world-changing offer? What if the British Empire, ruled by an unchanging queen, spread out to the stars for centuries? Explore this alternate world from USA Today bestselling author Anthea Sharp in five tales filled with ball gowns and nano-tech, steam power and aliens, and the timeless nature of the human heart.

Stars & Steam is a collection of short stories set in the Victoria Eternal universe.

Seven degrees above the horizon, she spotted it—a speck of diamond in the deepening twilight. A tiny dot of light that perchance was only a trick of vision, or a wayward dust mote.

But perhaps something more…

Miss Kate Danville's heart raced at the prospect, but she forced herself to remain still. With a deep, steadying breath, she leaned forward and gently twisted the eyepiece of her telescope, careful not to bump the instrument. The pinprick of brightness lost focus, then sharpened.

She was not mistaken. Certainty flared through her, filling her with warmth.

The image blurred again, but this time due to her own triumphant tears. Kate sat back and brushed the foolish water from her eyes. She would show them all that her little hobby as Father called it—Mother used stronger words like unsuitable and distastefully unfeminine—was more than simply dabbling in the astronomical arts.

She, Miss Kate Danville, had discovered a comet!

Oh, she was not the first women to do so—a handful of amateur astronomers had been the first to spot celestial objects, including her idol, Maria Mitchell, who received the Danish gold medal just two years prior.

Kate closed her eyes and imagined the King of Denmark presenting her with that accolade in front of an admiring crowd. Why, she might even get to meet the esteemed Ms. Mitchell, and perhaps be inducted into the Royal Society—

"Beg pardon, miss, but her ladyship sent me up to fetch you to make ready for the ball." The maid's reedy voice broke through Kate's daydream, bringing her down from the stars with a thud.

She opened her eyes, and was once again simply Miss Kate Danville, perched on the top of Danville House with her telescope and her fancies in the sooty June dusk.

"I need a bit more time," she told the maid. "Please tell my mother I must notate my new discovery."

The maid gave her a skeptical look, but dropped a curtsy. "I shall, but you know Lady Danville won't take kindly to that answer."

"I am well aware of my mother's expectations." They included a proper marriage and Kate's abandoning her inappropriate scientifical leanings.

But that disapproval would surely change once Kate's Comet was officially recognized.

Time was of the essence, however. Kate bent again to her telescope to jot down the exact location of the bright speck in the sky. If someone else notified the Royal Astronomical Society first, she would be robbed of her discovery. That must not be allowed to happen.

"Kate!" Her mother's sharp tones drifted up from the stairwell leading to the attic. "If you don't come down this instant, I declare I will have your father take your telescope away."

Lady Danville would never attempt to navigate the steep stairs—neither her wide skirts nor her temperament would allow the journey—but she was not averse to raising her voice. Or delivering threats.

She hastily scribbled a second set of notes, then tucked the precious piece of paper into her pocket. Time to face her mother, and yet another social tedium where the gentlemen asked her whether she liked roses, or droned on about their own accomplishments.

She blew out an unhappy breath. Lady Danville was determined to see Kate betrothed by the end of the summer, while Kate was equally determined to resist.

Although, upon further consideration, attending the ball that evening might be for the best. If Viscount Huffton or one of the other Royal Society astronomers were there, she could notify them of her discovery at once.