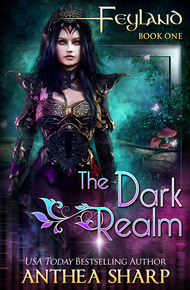 The Dark Realm by Anthea Sharp

Feyland is the most immersive computer game ever designed, and Jennet Carter is the first to play the prototype. But she doesn't suspect the virtual world is close enough to touch — or that she'll be battling for her life against the Dark Queen of the faeries.

TURNS REAL… Tam Linn is the perfect hero — in-game. Too bad the rest of his life is seriously flawed. The last thing he needs is rich-girl Jennet prying into his secrets, insisting he's the only one who can help her.

WINNING IS EVERYTHING… Together, Jennet and Tam enter the Dark Realm of Feyland, only to discover that the entire human world is in danger. Pushed to the limit of their abilities, they must defeat the Dark Queen… before it's too late.

Jennet Carter sneaked into the computer room, her heart beating too loudly in the stillness. She closed the door, holding her breath until the lock clicked solidly home. It was silly, being so nervous in her own house, but still. She didn't want any of the staff walking in on her while she hacked her dad's new sim equipment.

She padded across the plush carpeting to the prototype version of the FullD system, and ran her hand over the smooth curve of the sim helmet. The room lights reflected off the visor like miniature stars.

The most immersive gaming equipment ever designed was here, in their house—had been for two weeks—and so far all she'd been allowed to do was run around on grids and jump off blocky gray squares. Her dad wasn't the best player, despite being lead project manager on the FullD, so he let Jennet gear up while he took notes for the programmers. It was kind of fun, in a boring way. At least she got a chance to learn how to use the sim gear.

Then, last night, she'd noticed a new icon as she logged on; an F made of scrolled golden flame.

When she asked Dad about it, he'd made some weak excuse and hustled her off the system. Luckily, she knew his password. He hadn't changed it in three years. She should say something. But then, how would she be able to access the stuff he didn't want her to see?

Jennet hit the power button and slid into the sim chair, cushioned in fresh-smelling black faux leather. She donned the helmet, then pulled on the gaming gloves. The embedded LEDs winked at her as the system powered up, the sensor nodes on the gloves glinting like precious jewels: amethysts, rubies, emeralds.

At the loading interface, she lifted her finger and selected the new, flame-colored icon.

Haunting, mysterious music played through the helmet, and anticipation tingled through her. What was Dad hiding? What amazing new game was VirtuMax developing to go with their new technology?

Words appeared across the black background of the visor:

The letters glowed golden, then deepened to crimson as flames flickered along the sides. The music rose, and the words whirled up into a flurry of leaves the color of ashes. Behind them… Jennet blinked, a chill running through her. Was that a pair of eyes, gleaming from the shadows?

If the programmers were trying to create an eerie opening, they'd definitely succeeded.

The shivery feeling lingered, even as the standard character-creation interface popped up. She scanned the limited options: Knight, Spellcaster, or Bard. It didn't take long to read the descriptions and make her decision. She always liked being a magic-user in other games, so it was a no-brainer to choose Spellcaster.

Judging by the lack of options in the character menu, this was a very rough draft of the game. Jennet chose blue eyes and blonde hair—her own coloring. Her new character wore long blue robes and carried a magical-looking staff with a glowing crystal set in the end. She hoped she wouldn't end up running her avatar through more featureless gray landscapes—that would be a serious disappointment.

She tipped her thumb up, the universal glove command for yes.

Dizzying golden light enveloped her senses, and she swallowed. Whatever the programmers were experimenting with, it made her feel queasy. She wished could share her reactions and feedback with Dad. But she couldn't tell him she was using the prototype equipment without his permission.

For once, she was glad he was such a workaholic. As long as she logged off in time, he'd never know she'd been accessing Feyland.

The golden light cleared, and Jennet found her avatar standing in a grassy clearing surrounded by white-barked trees. She stood in the exact center of a ring of pale mushrooms that glowed like the moon. The sunlit grass under her feet was springy and soft, and she swore she could feel the wind against her face.

Wow. The developers had done a ton of work with the immersion software. This was nothing like the primary simulations Dad had her running around in. This world felt real. A faint, spicy scent tickled her nose—the smell of herbs and warm grasses. Jennet breathed in deeply, and smiled.

A breeze riffled the leaves, their undersides flashing silver, and birdsong lilted through the air. On the far side of the clearing, a fern-draped path beckoned. Taking a firm grip on her staff, Jennet jumped over the circle of mushrooms and started forward in search of adventure.