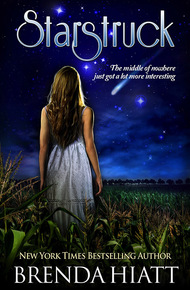 Brenda Hiatt is the New York Times and USA Today bestselling author of twenty-five novels (so far), including sweet and spicy historical romance, time travel romance, and young adult science fiction romance. In addition to writing, Brenda is passionate about embracing life to the fullest, to include scuba diving (she has over 60 dives to her credit), Taekwondo (where she's currently working toward her 4th degree black belt), hiking, traveling…and reading, of course!

The middle of nowhere just got a lot more interesting!

Nerdy astronomy geek Marsha, M to her few friends, has never been anybody special. Orphaned as an infant and reluctantly raised by an overly-strict "aunt," she's not even sure who she is. M's dream of someday escaping tiny Jewel, Indiana and making her mark in the world seems impossibly distant until hot new quarterback Rigel inexplicably befriends her. As Rigel turns his back on fawning cheerleaders to spend time with M, strange things start to happen: her acne clears up, her eyesight improves to the point she can ditch her thick glasses, and when they touch, sparks fly—literally! When M digs for a reason, she discovers deep secrets that will change her formerly mundane life forever . . . and expose her to perils she never dreamed of.

Book 1 of the award-winning Starstruck series, where teen romance blends with science fiction to open a whole new world of action, adventure and discovery.

I boarded the bus on the first day of school with a weird sense of anticipation. Even after nine years as the class dork, I couldn't quite squelch a fizzy little hope that this year would be different.

Maybe this year Jimmy Franklin would finally notice I existed. I was fifteen now and marginally less awkward than I'd been last year as a freshman. Maybe I'd do something wild and daring, like, oh, run for treasurer of the French Club. I might even get elected, since last year they'd had to arm-twist someone into doing it.

The familiar sour-stale school bus smell—like old french fries that had been baking in the Indiana sun all summer, with maybe a whiff of vomit—took some of the fizz out of my mood. It was the smell of a dozen past humiliations. Still, I clung to what I hoped was a confident half-smile as I headed for an empty seat two-thirds of the way back.

It was Trina Squires, of course—my nemesis. Trina was everything I wasn't: pretty, rich, popular, athletic. And we'd more or less hated each other ever since that bracelet incident back in third grade.

"Get dressed in the dark again?" she continued.

My best friend Bri, who had about fifty times more fashion sense than me, had picked out my outfit—a cute white cap-sleeve blouse dotted with tiny blue stars, and denim capris. I totally trusted Bri's taste. Not wanting Trina to think I cared what she said, I passed her before glancing down at myself.

Oh. Crap. Nice blouse, yeah—buttoned one button off. How did I not notice that before I left the house? Hitching my tattered green backpack a little higher, I tried to cover the neckline, where it was most obvious.

And tripped over Bobby Jeeter's foot, which he'd stuck out just for me. I caught myself—barely—before I went sprawling, but that didn't keep half the bus from laughing.

"You know, most guys gave that up back in fifth grade," I informed Bobby, grabbing my glasses before they slipped off my nose.

"What can I say?" Bobby shrugged, not the least bit apologetic. "It's still funny."

Trying to ignore them all, I pushed my glasses back up, sat down in the empty seat and started rebuttoning my blouse as inconspicuously as possible.

Nope, it didn't look like this year was going to be any different.