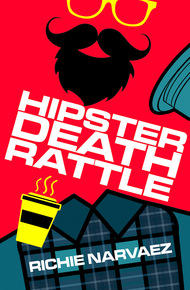 Richie Narvaez was born and raised in Williamsburg, Brooklyn. His first collection of short stories, Roachkiller and Other Stories, received the 2013 Spinetingler Award for Best Anthology/Short Story Collection and was listed as one of BookRiot's 100 Must-Read Works of Noir. His debut novel Hipster Death Rattle was published in 2019. His upcoming novel, Holly Hernandez and the Death of Disco, is a YA historical mystery.

Murder is trending. Hipsters are getting slashed to pieces in the hippest neighborhood in New York: Williamsburg, Brooklyn. While Detectives Petrosino and Hadid hound local gangbangers, Latinx reporter Tony Moran and his ex Magaly Fernandez get caught up in a missing person's case—one that might just get them hacked to death.

Filled with a cast of vivid characters and told with sardonic wit, this fast-moving, intricately plotted novel plays out against a backdrop of rapid gentrification, skyrocketing rents, and class tension. New Yorkers and anyone fascinated with the city will love the story's details, written like only a true native could.

I first came across Ritchie by way of his short stories and was immediately smitten. His writing has a dark comedic vibe with a message, like a clown luring you with balloons until you honk his nose and he pulls out a knife. I love the concept of this book because gentrification is a cousin of colonization. This is our history being played out again. Grab an overpriced craft beer or brew you some fancy coffee with a filter made from toilet paper and enjoy! I want to add Ritchie has an upcoming YA release, Holly Hernandez and the Death of Disco. Mark your calendars! – V.Castro

The bicyclist stopped and watched a small herd of them emerge from Teddy's. (The stained glass outside read "Peter Doelger's Extra Beer," but absolutely everyone in the neighborhood knew it was Teddy's.) And right away the bicyclist, watching from the shadows under a tree on North 8th, picked out one of them as perfect.

Teddy's used to be a great neighborhood bar. But now it was a bistro, one of hundreds, thousands, millions within a few blocks' radius, all crowded and pricey and pretentious. Because of people like this.

The herd parted, walking forward, some carrying on conversations with each other, yet all looking down at their phones. The one absolute perfect hipster separated like a scrawny calf from the fashionable herd.

He ambled off alone on Berry Street's narrow stone sidewalk, his man bun a tiny tumbleweed on top of his head bop-bop-bopping to some no doubt obscure tune on those headphones. Huge headphones trapping him in his bubble, cutting him off from the world, cutting him off from the sounds around him. The sounds of the bicyclist in the street, pedaling slowly, achingly, quietly as possible to keep up and still remain in the bike lane.

The hipster wore a big and Brillowy beard that overlapped the keffiyeh wrapped blithely around his neck. It was a chilly spring night in New York City, and cold rain still glowed on the sidewalks, so maybe why the scarf. But there was no excuse whatsoever for the bright red cat-eye shades this late at night— three in the morning, the dark night of the soul—on this dark a street. Cat eye because ironic, obviously. Which made what the bicyclist had to do even more necessary.

On North 10th Street, the hipster took a left turn. Perfect. While much of that block had been renovated, turned into un- attractive, industrial-looking, overpriced condos, some of the block was still old warehouses, decorated with the colorful honesty of graffiti. It was a quiet block. Desolate.

The bicyclist hopped onto the sidewalk and, focused on the target, failed to notice a fire hydrant. Hitting it on the slick sidewalk, the bicyclist was almost thrown but stopped himself by stepping hard. The bike's rear end lifted in midair at a forty-five-degree angle, back wheel spitting rainwater. It came down with a clang.

The bicyclist froze. But the hipster hadn't noticed a thing. Bubble.

"No one there is who loves a hipster," the bicyclist whispered. Leaning the bike against the hydrant and taking out the machete, the bicyclist caught up to him halfway down the block. Swung hard. Bang, right in the keffiyeh. It got stuck on the neck bone.

Cat glasses slipping, the hipster mouthed one word: "Fuck." Or it could have been "Fleek."

The bicyclist slashed him again across the face, aching to wipe those glasses from existence.

Back on the bike, the bicyclist pedaled home. It was a chilly night, but tomorrow would be much warmer.