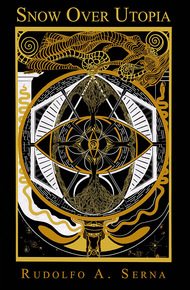 Rudolfo A. Serna was born under the nuclear shadow of Los Alamos National Laboratories and raised in the orchards, mountains, and fields of northern New Mexico. Occupations have included carpenter, landscaper, wildland firefighter, creative writing coordinator, and adjunct professor. With a penchant for '70s horror B-movies, psychedelic doom metal, permaculture, and nature worship. A regular contributor to Brick Moon Fiction, his stories can also be seen in Bewildering Stories, Aphotic Realm, and Augur Magazine.

Snow Over Utopia by Rudolfo A. Serna

In an age of savage science powered by black-mass, and thrown away bio-matter leaked into an underground sea lit by the heart of the great tree, a girl named Eden loses her rare blue eyes. Escaping her fanatical and sadistic slave masters with her eyes in a jar, she runs away with a murderer named Miner. After fleeing for their lives deep within the forest, they are found by the Librarian and his daughter Delilah, and sheltered in their mountain-top sanctuary. But she cannot stop there. If Eden wants to restore her eyes, then she must go on through time and space in a necrotronic stream generated by the living computer program called Witch Mother.

While mutantoid priests in underground bunkers monitor transmissions from the great tree, Eden and Miner must face the horrors of the factories and the coliseum run by the Robot Queen in the city of Utopia. Can they make the ultimate sacrifice and complete their mission? Or will they fail in Snow Over Utopia?

Fans of Dune and Mad Max will enjoy this wild and brutal ride. A vile baron, strange mutanoids, and a robot queen are only a few of the fascinating characters in this dark dystopian novel that will leave you wondering what you have just read. Rudolfo's jarring writing style makes the story extra special by completely immersing you into his world. You don't need eyes when you are guided by a voice like this. – V.Castro

The gray stone walls of the forest compound held rows of tilled soil, tended by the children, and inside the block buildings, the glaring faces of the flesh brokers inspected the girl's skin and teeth for imperfections while she stood on a wooden block, her head freshly shaven.

"It is almost ready," the flesh broker said, tapping her thigh with a stick.

"Where should it go?"

"Too thin for the mines."

"It may be better in a brothel."

The brokers were about to let her go.

The brokers stared at the bald female on the block.

The inspector placed his hands on either side of her head, pulling her face forward, staring into her eyes.

The other brokers rose from their chairs and quickly went over to their stock.

"I have never seen any."

"Keep this quiet. If they find out, they'll take it without paying. They'll say it's a religious matter."

"There are others in the Baron's court that will pay."

"What will they do with it?"

The brokers looked at each other.

"Whatever they want. After they pay," said one with a smile.

"Should we hide it?"

The girl put a gown back on, and a camp attendant led her away, leading the brokers to assume their find would be safely hidden for one more night until she could be taken to the buyers that would be contacted with the news that blue eyes had been found. Something remarkable as the blue eyes should be kept, and the rest could be discarded.

She was led across a courtyard.

Perched crows took flight, strafing the tilled rows, shrilling, pulling away, skirting along walls, spangling for freedom in the trees.

The sun was going down.

Children marched in and out of the barracks. There was a delivery of stock being loaded in back of a horse-driven cart to be taken to the company town through a cool drizzle. Brown human flesh driven from nursery to grave.

There was a market for blue eyes.

She was put in a small room watched over by an attendant who wondered what it was that made the girl different, unable to tell the color of her eyes in the dim light of a wood stove he stoked before sitting in a chair next to the door. He was ordered to watch, and not to touch. She sat on a cot and ate the extra rations given to fatten her up. The attendant wanted to get a feel of her insides, as he had done to the others, but instead he scoffed at her from the chair next to the door. "You will be a treat," he said, smiling, waiting for her to go to sleep. Perhaps then he would creep up to her and touch her just a little bit, being careful not to damage anything, but instead he fell asleep next to the warm stove, sipping the yellow swill from town.

In the middle of the night, she escaped.