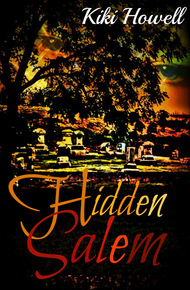 Intuition alone brought Makayla toSalem, MA in search of a story, but her research has her confronting more than she bargained for. With her empathic gifts stronger inWitchCity, she physically suffers, landing her literally unconscious in the arms of both Noah Ayers, local cop and Dylan Baines, local history teacher. Yet, it is Lauri, a witch who owns a local shop, who teaches Makayla about who she is and what she can do.

Unfortunately for all of them, Makayla also stumbles upon a coven in the woods practicing a dark magic ritual. Now they are after her, threatening her life and the lives of those she has quickly come to care about. Immersed in things she never expected, like an old legend and necromancy due to residual hauntings, the race is on to stay safe from the coven and protect her heart from a certain sexy cop.

But, is Lauri correct in thinking Makayla might just have encountered the only real witch inSalemin 1692? And, do they share the same bloodline?

I've known Kiki Howell for a few years now and had the pleasure of working with her on a few occasions. Her writing is superb and I was so pleased she was up for participating in the bundle with this novel. It's truly a perfect fit!

5 of 5 stars from Michelle's Paranormal Vault: "Love the Magic of Salem. … A Must read for all Witch lovers, and lovers of the Paranormal alike." –David H. Burton

In the outer edges of my vision, the cloudless sky became as dark as night. A shroud of fog descended, an image only I could see, I knew, but for a moment blocked my present reality. Despite the sunlight that warmed my shoulders, shadows of rainclouds filled the sky. The juxtaposition between today's reality and the glimpse I caught of the past were like a thousand icy fingers tapping down my spine.

I'd stumbled upon another piece of residual energy stuck in the earth, what some would call a place memory. Thus, a scene from the past played itself out for me. Nothing new. I'd long ago come to terms with the fact I'd grown up different. I'd not asked for these gifts, if a person wanted to refer to them as such. I managed to live with the fact I was empathic. With living people, that proved one thing, but I often had to deal with the emotions of the past ─of the dead─ as well.

Though the smells of brine and salt water still came with each breeze, the picturesque scene of Pickering Wharf blurred, changed shape before me. I'd longed to see Salem's gateway to the sea, without any reason as to the strong yearning. Now, here I stood on the harbor in the year of 2011, but it looked like something straight out of a history book. I witnessed the place in both its present time and the way it appeared many years ago. The misty view of the past flickered before the real time images in front of me. I squinted, cocked my head, but I couldn't make the scenery look as it had a minute ago. The edges of mud and rock along the water were no longer as formed by the elements. Instead, it expanded in spots, presented itself as it had once looked long ago, as if centuries of erosion had never happened.

A ghostly aberration of a woman, not of this time, appeared before me. My heart skipped a beat. She stood between the shoreline and me. Dense, pelting rain soaked her hair. I trembled against the thickness of the air. Her dress, a Puritan brown, clung heavily to her body. Yet I knew, as if we were the same person, more than material weighed her down. She hugged her flat stomach, arms wrapped in a protective squeeze.

The ghost-like image glanced back at a large, spectral ship. The old seaworthy vessel fluttered into my field of vision as quickly as it dissipated into the ether. The clanging of its bell marked its arrival and its departure. As if she'd been spooked by the same apparition, she took off on a run. My muscles jumped to do the same, but I tensed, defiant in my stance, frozen in place.

The woman was not a ghost, though. This I knew from research. I'd read books on the sly, so no one would know the secret of my gifts. I tried hard to appear normal more than any other thing I did in my life. If people were aware of what I could see and what I could feel, they would call me crazy, lock me up, and throw away the key. This I knew without a shadow of a doubt.

The idea that a place can hold a memory of past events that can be viewed or felt by people with certain sensitivities, people like me, is not a new one in the field of parapsychology. Studies had shown that in places where the human spirit had experienced intense feelings, a trace of their anguish stuck, engrained itself into the ground. It is that trace, that energy, which a receptive mind can pick up on, witnessing the past like a vague vision.

I kept all this in mind. I didn't exist in this woman's time any more than she did in mine. I stood firm, tried to ignore any apprehensions as she flew toward me. Her feet barely hit the ground. She appeared to look through me. A few seconds later, she stepped into me. I looked down at my body, unsure if I stood still or floated backward with the woman. Her lungs moved inside mine. I no longer had control over the air that entered and left my body. My ribcage expanded and contracted, forced by hers.

For a moment, fear seized me. My breathing stopped. She grew frantic. Her tension lifted my brows and tightened my jaw. I resisted the urge to curl over a nauseous stomach. She sighed, resigned herself to her fate, and then rebuilt her courage. The name Mary floated into my mind with a low hum of a sound, the timbre of a somber voice.

For a moment, her vision became mine, the harbor as it had looked centuries ago. The muggy air, rank of horse droppings and dead fish filled my nose. The silent, dark street became eerie, intensified by the rhythmic lap of the the water's movement and the men who worked behind her. A forlorn warning, that told her prospects were bleak.

Sudden grief strangled me. Her fear punched me in the gut. The tang of blood from where I'd bitten my lip soon replaced the sour taste in my mouth. Her husband had died on the trip over, but somehow she knew she carried his child. The questions as to how she would live in this place and take care of her child filled her mind, and thus mine. The urge to hug almost made me extend my arms to comfort her. I knew that action impossible. No woman, ghost, or spirit actually stood there.