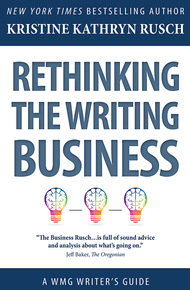 In this WMG Writer's Guide, award-winning author and business owner Kristine Kathryn Rusch provokes writers to think about their own careers as a business with limits only the writers, themselves, impose.

From newly professional writers to those with years in the trenches dealing with traditional publishers, Rusch shows how to expand author earnings and audiences beyond the obvious channels.

Drawing from her own vast experience in the industry, Rusch demonstrates that potential markets abound, and every novel, short story, or creative nonfiction essay can become so much more than a one-and-done published piece.

From information on IP and licensing to what the writing industry truly looks like today, Rusch' lifts the veil on the potential for every writer's business to thrive.

For years, I've told writers to learn copyright. Writers don't sell books; writers license copyright. And copyright can be licensed a hundred (or a thousand) different ways. Each license pays good money, and increases exposure for the writer's other works. How can you license your copyrights? This book will not only tell you how, but will teach you how to think about your writing business in a way that will make your business profitable for years to come. – Kristine Kathryn Rusch

I started this book in the spring of 2018, even though, at the time, I hadn't realized that I would write a book about this, or even that the events of that spring would so drastically change my thinking that a book would be necessary.

I work my way through changes in my life and in the world around me by writing about them. It's clarifying to put my thoughts on the page. It also forces me to step past my assumptions. In order to write about those thoughts, which I do for a weekly audience on my blog, I have to research anything that I have the slightest hesitation about.

I have a lot of hesitations, particularly when I'm challenging the system I've known for years.

I grew up, as a person and as a writer, in a completely different writing environment. When I was young (and we went uphill in the snow both ways just to get to the car), traditional publishing was the only game in town. Either you had to play by their rules, or you probably wouldn't play at all.

A lot of those writers were delusional weirdos, who ended up with a garage full of badly produced and badly written hardcover books that they couldn't give away. But for every dozen delusional weirdos, there was one writer who always made me pause. I would look at what that person was doing, and it would send a shiver down my spine, a shiver that went with the thought—should I be doing that?

Then I would realize that I couldn't do that, either because of the contract I signed or the limits of my own imagination. I also had the delusional belief—based on promises made by my agent and editor—that the publishing company would do all the things that the handful of self-published authors were doing well.

Those promises were false. Maybe they had been true in the 1960s, when many of traditional publishing's contract templates were written, but they weren't true in the 1990s, and they certainly aren't true now.

I'm writing this introduction in the midst of the COVID-19 social distancing month of March, 2020. This month, ViacomCBS put Simon & Schuster up for sale, one of the most bone-headed moves I've seen a major company make. Instead, ViacomCBS should hire some employees to put all of S&S's contracts into a database, looking at the terms and the various opportunities for licensing. Because I know for a fact that since the year 2000, S&S had some harsh licensing terms, things they kept for themselves that writers couldn't fight if they wanted to.

I know this, because I was one of those writers. I've managed to get most of those terms reverted, but not all of them. And I also know that for the most part, no one at S&S remembers or cares what's in my contract, and probably has no real idea that they still have a book contract with me.

However, I'm writing this book for indie-published writers. Writers who own their own company, writers who understand business, and writers who control their intellectual property (IP). If you're one of those writers, then this book is definitely for you.

If you're one of the writers who is contemplating going indie, then this book is for you as well.

If you don't understand contract terms or even how intellectual property works, I urge you to pick up my book, Closing The Deal On Your Terms: Agents, Contracts and Other Considerations. I will touch on the importance of intellectual property in this book, but if you truly want to understand it, please pick up that one as well as The Copyright Handbook, from Nolo Press.

Even though I'm working on a fairly stringent deadline, I hesitated over finishing this book. After all, my reality is those first few weeks of the coronavirus shutdown that hit the U.S. this March. Friends in other countries (and in other cities) are already on lockdown, and the Licensing Expo, which I've mentioned in the chapters that follow, was postponed from May this year to August of this year.

There's a lot of uncertainty right now, and so I wondered if I should compile this book or try to rapidly write another one to fit into the same deadline.

I decided to compile this one, because I know that its principles will still apply after this current crisis is over.

Crises happen. From 9/11 to the coronavirus to maybe something else lurking on the horizon, these moments in history cause pivot points that change the direction of everything from the way we live our lives to the way we conduct business. At first, I wondered if this coronavirus would change how we do business.

It probably will on some level. Some industries will be changed forever.

But, as I usually do, I looked back at history for guidance. I did not look at the 1918 flu, as so many others did, or any other pandemic. Instead I looked at one of those globe-changing events that caused everyone to alter their behavior at the same time.

I looked at World War II.

The entertainment industry mobilized in World War II. Actors who didn't serve made films for the War Office (which were written by writers who didn't serve either). Recorded music became even more important than live music because people wanted to share moments with their loved ones across the world. A new form of book appeared—the pocket book, developed in the early part of the 20th century, but became ubiquitous in the war. The Armed Services Editions, paperbacks of a strange size and shape, were shipped free to GIs, in a box with chocolates or other items that made life at war just a bit easier. The publisher and author split the royalty on the free edition, at one penny each—which sounds like a little, but was actually 18 cents in 2020 currency—about two-thirds of what a traditionally published author gets in actual royalties for the sale of a modern mass market paperback.

Music from the era went into the movies. Some of the books got filmed. Many of them became the basis for cartoons, and a lot of the characters that became well known in the war went on to have a long post-war life.

Products change in the middle of a crisis. The way that we consume entertainment changes as well. But our need for stories and storytelling remains the same.

And if someone likes the story you're telling, likes it enough to become a fan of it, that person doesn't just want another book, they also like related products like T-shirts and mugs and stuffed animals, and pretty much anything you can think of.

As I do with all of my nonfiction, I wrote this book as a series of blog posts that ran off and on from spring of 2019 to winter of 2020. You can find them for free on my website, kriswrites.com, but they're out of order and often repeat information. That site also has whatever new nonfiction book I'm working on, as well as a weekly business blog about the publishing industry.

I have kept the chatty tone of the weekly blog, as well as the present tense in the "current" examples. I want you to see how my thinking evolved.

This book is much more organized than the original posts. I deleted some information I no longer agree with. Some of you who have read previous nonfiction books of mine might recognize a chapter or two, as I repurpose the information because I feel that information is necessary for the understanding of the ideas presented in this book. I promise that the repurposing is only a tiny amount of what you'll find herein.

The purpose of this book is to get you to think about your writing career as a business. I hope the book will also show you how each novel or short story or creative nonfiction essay that you write can be so much more than a one-and-done published piece. The limits you have on the uses for your work are limits that you impose—either by a lack of time or a lack of imagination or a lack of resources.

I want this book to help with the imagination aspect. The book won't help with time or resources. But I always believe that it's better for someone to know what is possible, so that they might take advantage of those possibilities somewhere down the road. In other words, it's better to be prepared for future opportunities than to have those opportunities pass by.

The opportunities presented here are legion. I hope you'll be able to take advantage of many of them. I know I plan to.