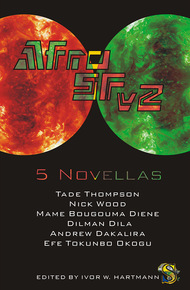 Continuing the ground-breaking tradition of the first volume AfroSFv2 is the first Pan-African anthology of five original SF novellas.

'Hell Freezes Over'
Mame Bougouma Diene
Long after the last skyscraper has drowned who remains and how will they survive?

'The Flying Man of Stone'
Dilman Dila
When ancient technology seems like magic legends live again in the midst of war and sides will be chosen.

'VIII'
Andrew Dakalira
A space shuttle crash, the numeral eight, serial murders, what connects them all could end humanity.

'An Indigo Song for Paradise'
Efe Tokunbo Okogu
Change is coming to Paradise city and it won't be pretty, but if this is paradise then heaven must be hell in need of a revolution.

My hands are deep in sand, and there is blood on the snow.

He did not know why there was snow.

He tried to rise, but it was not time. His breath came in ragged gasps, a death rattle? His ribs grated on each other when he inspired. His jaw felt heavy and swollen. More drops of blood on the snow, from his face. He tried to move his tongue, but it had grown snug inside his mouth and did not budge.

He was on all fours. He could tell that now, but his right arm was crooked, maybe broken. The left arm held all the weight. Another warm dribble down his face. He pulled the left arm out of the snow and wiped it across his face. It came back smeared red.

He tried again to stand, but it hurt, a pervasive pain that he had never experienced, his nerves screaming for respite. It seemed like he could feel the individual vertebrae in his backbone.

What happened? What did I do? What did we do? Why is it snowing?

He managed to stand. The horizon wobbled and turned, or he may have been turning. It was difficult to tell. Blood still streamed out of him, dripping on his chest and landing on the snow. He felt neither heat nor cold, but the crisp air helped to clear his head and stabilise his vision.

There were depressions in the snow, footsteps, ending in a lump of a man about fifty yards away. Head bowed, arms by the side, kneeling. His enemy.

Oh, mother. What have we done this time?

He could not find any hatred inside himself, not anymore. He was done. This was over.

He tried to fly away, but his feet stayed linked to the earth. He could not jump because each movement was agony, especially for his right arm.

Maybe he was dying.

He focused on the weather. It should not be snowing. He closed his eyes, coaxed the clouds, and asked the water to disperse. You didn't force weather. You just eased it into doing what it wanted. You said, please don't form precipitation. Sometimes, it listened.

The snowfall stopped but the clouds would not move. Not yet.

Breathing heavy now. The next part would hurt, but had to be done. He held his right forearm and twisted counter-clockwise sharply.

He screamed, and almost passed out again.

His enemy did not stir.

Maybe there was some hatred left after all.

He took strips of his enemy's cape and made a crude sling; then he walked away.

After an hour he came to a gaggle of Algerian troops. By then the sun had returned and the snow had turned to slush. They recognised him and eased safeties off their weapons. He took their fear, absorbed it and fed it to his body for healing.

He spoke Arabic by drawing it out of their minds. "I surrender," he said. "Take me to prison."