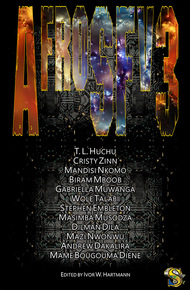 Space, the astronomical wilderness that has enthralled our minds since we first looked up in wonder. We are ineffably drawn to it, and equally terrified by it. We have created endless mythologies, sciences, and even religions, in the quest to understand it. We know more now than ever before and are taking our first real steps. What will become of Africans out there, will we thrive, how will space change us, how will we change it? AfroSFv3 is going out there, into the great expanse, and with twelve African visions of the future we invite you to sit back, strap in, and enjoy the ride.

Water looks the same everywhere. It's only the background, lighting, and impurities, that differ. I peer at the silver-grey surface of Bimha's pond, calm and still, undisturbed by wind. It's deep and the bottom is a black abyss. Midday here is like dawn on Earth in the middle of the Kalahari. Light shines through the transparent panelling of the pressurised geodesic dome that prevents the water boiling straight into vapour.

'This is where it happened,' VaMutasa says to me on the crackling open channel.

We can't take off our helmets because the atmosphere within the dome is not fit to breathe. I take a step closer.

A trail of small footprints runs beside me. We followed it here, but where we stop, it carries on, bravely, foolishly.

'This is where it happened,' VaMutasa says once more, as if to convince himself.

The icy brown soil under my boots feels hard. Each movement I make is slow and considered. A white plume of steam rises from the outlet pipes a kilometre or two away, the far end of the pond. Thirty million gallons of water cycle in and out of the Nharira Nuclear Fusion Plant nearby. Superheated steam is deposited into the ground, liquified and the cold water is cycled back to the plant via insulated pipes.

I close my eyes and take deep breaths, fighting the sickness threatening to void my stomach. My chest feels tight, tied with an iron band, and I reach to remove my helmet so I can breathe. My husband grabs my arms:

'Remember where you are,' Tarisai says. 'I told you this would do no good.'

The tone of her voice is reproachful and she's angry, a dam waiting to burst. But on the open channel, with everyone listening in, we save the argument for later, piled up with the rest of the little tears and scraps every marriage sweeps under the bulging carpet.

I must be polite; the muroora, daughter-in-law, is not just married to one person. The bond of matrimony ties her to everyone in the clan, both the living and the dead.

'It's important, whatever you do, you mustn't cry,' VaMutasa says. 'The njuzu won't let him go otherwise.'

'My son's just drowned and you're talking about mythical creatures?' I snarl but hold my tears all the same. Even though I know it's superstition, something inside checks me, because, with the chips where they lie, all I can do is hedge.

'One of the technicians, Chisumbanje, fell in the water twenty years ago. For three days, we couldn't find him. Then, when he came back, he was a powerful n'anga without equal in the Belt. He saw her, the njuzu. She's in there,' a woman's voice says, but I don't recognise it.

'Whatever you do, you must-not-cry,' VaMutasa says, this time in a firm voice. 'We'll prepare the rites.'

He is my father-in-law, Tarisai's father, the head of the Mutasa clan. Their fortune is made from farming the desert and selling water—hydrogen and oxygen—to wayfarers passing through to worlds beyond.