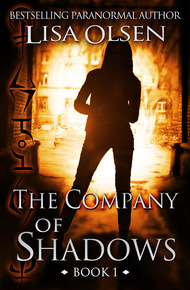 The Company of Shadows by Lisa Olsen

Cady Garrett can't help but be shaken when next door neighbor, Ethan, shows up in the nick of time to save her from a ruthless killer, spouting mumbo jumbo. Even more disturbed when the killer slits his own throat to escape Ethan after a vicious struggle. Curiously, Ethan insists on leaving before the dead killer returns, even though he can barely stand on his feet. Nursing him back to health, Cady is drawn into a world of half truths and mysteries, where shadows hide more than the seedy underbelly of San Francisco's Tenderloin district. She has become the obsession of a darker power, and no one, not even Ethan, can keep her safe from his twisted desires.

Lisa is another author whose career I've been keeping an eye on. You'll understand why when you read her works.

Sexy demon who can seduce with a single look - check."

Going to get this book? Check! –David H. Burton

In general, Cady didn't have trouble talking to guys. Outgoing by nature, she figured the worst that could happen was he could tell her to F off, and she could at least say she'd tried. Still, she hadn't approached a total stranger like this before, usually there was some other pretense that had her offering the first words. Something like… I love your jacket, do you ride a motorcycle? But what could she say to this guy? He looked like he was dressed from Salvation Army castoffs.

"Hi, I don't think I've seen you in here before," Cady approached, smiling past the inner cringe at the lamest pick up line ever.

Not what she'd expected to hear. "I wasn't offering anything." A furrow appeared on her brow, he hadn't even looked at her.

"It's just a general no, thank you." He offered the barest of smiles before returning his eyes to the crowd. "I'm not here to pick up girls."

"Oh, are you into guys?" Cady sat beside him, the brief smile and oddly polite rejection piquing her curiosity. He didn't outwardly object to her taking a seat, but he didn't look thrilled about it either.

"I'm not here to pick up anybody," he growled, letting out a sigh that could have meant anything from a deep heartache to indigestion. "Go try someone else."

Cady's eyes darted back to her table to get a thumbs up and an encouraging grin from Penny. Kelli was already making eyes at the mad dancer she'd spotted before. "I'm not trying to pick you up either."

That earned her the first look from him that lasted longer than half a second, and it came with a raised brow. "You're not?"

"Okay, maybe I did say hello under false pretenses," she allowed with a flap of the hand. "Do you see my two friends over there?"

His gaze never shifted, but he described them well enough. "Petite brunette, dressed like a widow, and the bottle blonde, five six, her ass hanging out on the dance floor?"

Her head craned back in time to see that Kelli was indeed out on the dance floor, shaking her booty. "Then you were checking us out."

"Not particularly." He shrugged a single shoulder.

"Um…" Not quite sure what to make of that, she plunged ahead. "Anyway, I sort of promised I'd try to pick you up, but I'm not really. It's just to get them off my back, and Penny thinks you're safe because we're neighbors."

"That's the most ridiculous argument I've ever heard." He didn't bother to keep the scorn from his voice and it earned her another look. "Why would I be safe because we live in the same building?"

Even though she'd expressed the same doubt not two minutes before, she couldn't help but try and defend her friend's position. "Well, because… if you tried anything I could always tell the cops where you live."

"And that would make whatever sicko attack I could dream up okay?"

"No, but you wouldn't attack me, knowing I could turn you in. It's a natural deterrent, see?" Her winsome smile didn't appear to have any effect on him.

"Only if you survived it."

"My friends know you're my neighbor, they'd report me missing if I didn't turn up for work tomorrow."

"Big comfort that would be to your friends and family after I murdered you in cold blood."

Her head canted to one side as she wondered how they'd strayed to that particular topic. "Do you often kill girls who pick you up in clubs?"

"Not usually, but I'm beginning to understand the appeal," he muttered, shaking his head. He looked over at her and she got the feeling he was truly seeing her for the first time, his eyes giving her as frank an appraisal as she'd given him before lingering on the delicate gold cross that hung around her neck. His face softened, and when he met her eyes again, his tone was earnest. "Look, whatever this is, no thank you. The safest thing you can do is take your girlfriends out of here and go home. In a group, together. In fact, you shouldn't be out in a place like this at all."

He was starting to sound like her brother. "I can take care of myself." Before he could reply with what she was sure would be a cutting remark, she changed the subject. "What are you doing in here anyway? Besides not picking up girls or guys?"

"I'm… working," he replied after a moment's hesitation.

All at once the reason for his protective disinterest hit her. "Are you a cop?"

"Why didn't you say so?" Cady relaxed beside him. It made perfect sense to her, a cop would find the neighborhood dangerous for a girl her age, and it explained his hyper-vigilance. "You know, it actually helps with your stakeout in a club if you're seen talking to a girl. Otherwise you stick out like a sore thumb."

"You think so?" A half smile tugged at the corner of his mouth. "Been on many stakeouts have you?"

"Oh yeah, I'm an old hand at them. My dad was a cop back in the day. He used to take my brother and I with him plenty of times."

"I'll bet." His eyes narrowed, but at least they were focused on her for a change. "What kind of a cop takes his kids into a dangerous situation like that?"

"The kind who can't afford a babysitter?" she grinned, and he shook his head in amusement.

"Let me guess, you saw the back seat of a cop car a few times and now you think you know all about surveillance?"

"I know the trick is to blend in, to not look like you're there just to watch. Which you are failing at, by the way. You look like you belong in the alley behind the club, not inside it."

He frowned down at his jacket. "I'm not trying to blend in, I'm here to make sure nothing bad happens. There's something to be said for a visible deterrent, you know."

"Then why not show up in your uniform and flash your badge around? Besides, what are you expecting to stop from here? Everybody knows the drugs go down by the bathrooms."

"I'm not here because of the drugs, I'm here…" he stopped, eyes darting back to the crowd. "Shit… I'm here letting myself getting distracted by a pretty girl instead of doing my job."

"You think I'm pretty?" Cady's smile returned at the backhanded compliment, but he didn't seem to realize he'd given it. His attention was fixated on something else and she turned to see if she could spot it, but everything looked normal to her. There was no sign of Kelli anywhere, and Cady realized she'd been gone longer than she intended. Penny must be… sitting with Rico Suave, chatting up a storm and… flirting?

"You should get back to your friend before she makes a serious mistake." He seemed to echo her thoughts. But how did he know Penny wasn't free to flirt in a club with a sexy stranger?

"She'll be alright, trust me. She's just being friendly."

"Very friendly," he replied in a flat tone and Cady had to agree. Penny was being uncharacteristically touchy feely, laying her hand on the guy's arm, leaning in close while she talked to him. It was like she and Kelli had switched bodies.

"Okay, but she's engaged," Cady insisted, not sure who she was trying to convince more, him or herself. "There's no way she's about to leave with that guy." Except that they both rose from the table together. "I'd better go."

"Be careful, he isn't what he seems."