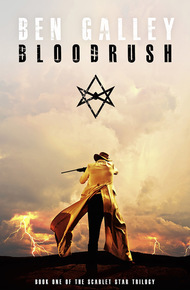 Ben Galley is an author of dark and epic fantasy books who currently hails from Victoria, Canada. Since publishing his debut Emaneska Series, Ben has released a range of epic and dark fantasy novels, including the award-winning weird western Bloodrush and standalone novelThe Heart of Stone. He is also the author of the critically-acclaimed Chasing Graves Trilogy.

Ben can be found on Twitter or vlogging on YouTube @BenGalley, or loitering on Facebook and Instagram @BenGalleyAuthor. You can also get a free ebook copy of his epic fantasy The Written at www.bengalley.com.

When Prime Lord Hark is found in a pool of his own blood, his only son Merion Hark finds his world turned upside down and inside out. The Prime Lord's last will and testament forces Merion west across the Iron Ocean, to the very brink of the Endless Land and all civilisation. To a place they call Wyoming.

In the dusty frontier town of Fell Falls, there is no silverware, no servants, no plush velvet nor towering spires. Only dust, danger and the railway. Merion has only one ally to help him escape the torturous heat and unravel the mystery of his father's murder: a faerie warrior named Rhin, and a twelve inch-tall outcast of the fae realm.

Revenge and redemption are never easy. There are dark forces at work in Fell Falls, and not just the railwraiths, brigands or the savages. Secrets lurk in Merion's bloodline. Secrets that will redefine the young Hark, and open up a whole world of magic buried by empire and industry.

Bloodrush has it all, dragons, jaw dropping magic, rich world building and twisting plot that keep you turning the pages. A riveting read.– Daniel Potter

One by one, the green shrubs that had brightened Merion's morning died away until there was barely anything but rock, sand, and brown scrub. Merion sighed. Even the terrain wanted him to feel unwelcome.

As the train reverberated around him and made his teeth jiggle, Merion's mind once again turned to its dark corners. He wondered what he had done to his father to deserve this. He wondered whether he should start cursing his name, whether it would make any difference.

Merion had left London in a muggy cloud of confusion and disbelief, almost as if he were still dreaming. But with every mile west he'd crawled, that disbelief had melted away and left something very solid in its place. His father had been murdered, and he had been banished to live with his aunt, the undertaker. His whole life hung in suspended animation, ripe for greedy claws to pick at. That disbelief had become a very chilling reality.

The young Hark may have been trembling, but he had no tears to shed. Along with the fear there came a burning, indignant anger. And as we all know, anger must have an escape route, otherwise it boils up into something a little more dangerous. So it was that Merion's anger gave him an idea, a purpose to shield him from this awful new reality of his. He swirled it around inside his head, and let it keep him warm.

As they steered a course north and west, the scenery swapped between the unbearably flat and the worryingly steep and craggy. Merion had one thing to say for the cobbled-together locomotive: it was as strong as the sea. During the ten hours between Cheyenne and Fell Falls, it never broke pace once, not even on the hills. It was an unstoppable force that dragged him ever-onwards.

The sun was just setting when they crested a hill only a handful of miles from Fell Falls. For a moment, Merion couldn't bring himself to look, before he remembered some more of his father's cold words: We must always stare our opponents square in the face, whether in the street, the ring, or amongst the Benches.

'So be it,' Merion spat, and turned, daring Fell Falls to inch closer. And so it did.

Close up, the town looked like a monster, sprawling and leaking charcoal smoke from its pores. Its veins were dusty streets scarred with the pockmarks of hooves and wheel-ruts. Its tentacles were wandering, misshapen buildings and ambling paths. Its skin was made of wooden slats, jagged and tortured like every true monster's skin, and like every true monster, it was being harried and attacked.

The freshly beaten railroad from the east pierced the monster's side like a silver spear and ran it clean through. Roads snaked in from the north and south, looking for all the world like ropes lassoing the creature's wooden limbs. As the light faded and the shadows grew long, Merion could almost imagine the town thrashing and flailing as sunset made the sky ripple. With every twist of the track they came closer. The locomotive aimed its nose right for the heart of the town and chugged towards it. The men in his carriage had grown silent. Merion just pressed his face harder against the glass.

The black skeleton of a church lay on Fell Falls' eastern outskirts, as though it had somehow escaped the tentacled clutches of the sprawling monster yet had paid the price with fire and flame. In the scorched soil of its graveyard, stood a congregation of sun-bleached crosses, creaking in the desert breeze. Some were dressed in dusty hats with holes, others adorned with pickaxes and tools, still others with garlands of wild flowers, either fresh or dried and crumbling. Some crosses bore no gifts at all. Merion tried to count them as they rumbled past.

On the locomotive's other side, to what Merion assumed was the north, a great barn stood alone in the desert. Flags flapped from several poles on its roof, each bearing colours and shapes, but at that distance Merion couldn't make out their specifics. To his squinting eyes, it almost looked like a coat of arms of some sort.

No matter where Merion looked, how far he craned his neck, or how much he squinted, he could not spot a single drop of water. Unless they were to be found in the surrounding low hills, it seemed that Fell Falls actually had no falls at all; the name was a lame joke at the town's expense.

As the locomotive pulled into the station (if a jumble of wooden decking, a glorified shed, and a small outhouse can be considered a station), the sun was just about to set. The vast sky had turned a deep, furnace-orange, and it made Fell Falls glow.

There was barely a brick building in sight. The whole of the town seemed to be constructed of a grim grey wood. Thankfully, its citizens had gone to some effort with their paintbrushes, and there were plenty of colours on the insides of the monster. There were plenty of citizens too. The dusty streets were abuzz with men and women. Workers, guards, farmers, shop girls, stableboys, the lot. Merion watched them as they wandered to and fro, some drinking, others laughing. Some even sang. He wondered how there could be so much merriment in a place as dangerous as this. Why weren't these people in their homes, behind locked doors? He wondered.

What Merion did not know, and would soon find out, is that it took a special type of person to exist out here, on the edge of the world: the sort of person that knows, as we all do, that copious amounts of alcohol and laughter are brilliant methods of keeping the heavy weight of mortality and an occasional disembowelling off your back.