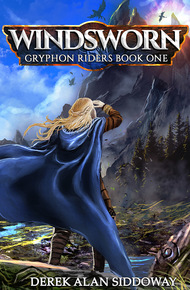 As a blacksmith's apprentice, Eva keeps her hands busy and her head out of the clouds. When she stumbles upon a stolen gryphon egg, she must leave the safety of her quiet life behind and join the Windsworn—an elite band of warriors who ride fierce gryphons into battle.

As Eva struggles to earn her place among the warriors, she discovers a sinister plot that could draw on the secrets from her past to bring about the Windsworn's downfall. To save her new friends, Eva must summon her courage and uncover the truth of her mysterious origins before the kingdom plunges into all-out war.

The first of a YA Gryphon Riders series, Windstorm tells of a young woman's coming of age in an adventure filled epic.– Charlie Lamb

Soot heard the thrum of gryphon's wings and the scrape of talons on cobblestone long before the knock ever reached the door. Even so, he hesitated to rise from his chair by the fire, heaving a sigh as he did so.

The smith's singed and callused hand paused when he reached for the door latch. He'd half made up his mind to pretend like he hadn't heard anything when another knock came.

"Wayland! I know you're in there."

"Who's there?" Soot asked in a gruff voice — even though he knew exactly who it was.

The smith sighed again and lifted the latch. Pulling the door open, Soot could see by the small fire crackling in the hearth a tall man standing on the threshold, dressed in leathers and royal blue. Shoulder-length blond hair framed a weatherbeaten and worried face, aged beyond its twenty-something years. When he saw Soot, the visitor's piercing eyes softened, and his stern expression broke into a grin.

"By the Tempest, it's good to see you again, old friend!" the man said, gripping the smith's shoulder. He looked past Soot, taking in the small room and its meager contents.

"So, this is where you ran off to," Andor said in a low voice, half talking to himself. He glanced back at Soot, answering his friend's unspoken question. "It wasn't hard to find you, Wayland. What other forge in the city has a golem working in it?"

Soot grunted and shrugged his burly shoulders. "It's the middle of the stormin' night, Andor. What're you doing here?"

"You didn't have to leave," Andor said, ignoring his friend's question.

Before either man could speak again, a baby's cry filled the darkness in the street. In the flickering torchlight, Soot made out a pale gray gryphon, standing stock-still in the middle of the yard.

While Andor walked around the gryphon's side toward the sound of crying, Soot approached the creature's head.

"Hello, Stormwind," he said, running a hand down the gryphon's beak. The gryphon gave a small scree in recognition and leaned into the smith's touch.

A few moments later, Andor appeared holding the wailing bundle. Soot looked down at the child, a frown creasing his brow, and jerked his head toward the cottage. Inside, Andor sat down in one of the chairs by the hearth, rocking the infant until it fell silent once more.

"Thank the winds," he said. "I'm not cut out for this parenting business — I guess I should count myself lucky she slept that long."

Soot sat down across from the pair, never taking his eyes off the swaddled baby.

The smith's throat bunched into a knot. "Marien?"

Soot ran his good hand over his bald head and covered his face. After a moment, he cleared his throat and looked up at his old friend again with tears of his own.

"Adelar won't speak with anyone," Andor continued. "He shut himself in his room and ordered her out of the citadel as soon as he found out Marien died."

Soot rose for the door, hand tightened into a fist. "Enough is enough! I'll pound some sense into him if it's —"

Andor raised a hand to quiet his friend. "Soot, please. You'll wake her. He's beyond reason. I…I'm not leaving her with some strangers. He'll change his mind someday, realize what a thunderstruck fool he's been. But for now, she can't stay."

Soot's face changed from outrage to horror as it dawned on him what his friend was asking. "Oh no! I can't, Andor, I don't know the first thing about babies. You take care of her!"

"The Gyr is no place for an infant," Andor said. "Please, Soot, just for a little while. I'm certain —"

"If anyone, her father should be the one to raise her!"

Soot raised the capped stump where his right hand should have been. "You know how hard it is to be a one-handed smith? Even with Seppo, it's all I can do to keep up, let alone try and raise a child. I've given enough to your stormin' family and the crown."

Without realizing it, Soot towered over Andor, chest heaving. His friend looked up from his chair, still holding the baby. When he spoke, it wasn't in the barking tone he used to command his riders; it came out so soft Soot almost didn't hear it.

"I wouldn't ask you to do this for Adelar. This is for Marien."

Only the snap of coals in the fire broke the stillness. Soot's shoulders drooped, and he nodded. Before the smith could change his mind, Andor placed the bundled child in his friend's thick arms. Soot stared at the sleeping baby, captivated as Andor reached into the pocket of his royal-blue uniform. The gryphon rider pulled out a white stone set in silver on a matching chain.

"Marien wanted her to have it," Andor said. "She gave it to me almost a week ago — almost…like she knew."

Soot stared at the white stone as it spun on the chain twinkling lights of sky blue, blue and gold. He nodded to Andor to lay it on the table, still holding the swaddled infant in awkward arms.

"I'll see to it you're sent whatever you need," Andor said, stopping at the door. "But Soot — she can't know. Not anything. Understood?"

The smith replied with a grunt, still trying to figure out how the night had ended with him holding a newborn. Andor reached for the door latch.

"And Soot…thank you. You don't know what this means."

"Wait," Soot said as Andor stepped into the street where his gryphon waited, clawing at the cobblestones. "What's her name?"

Andor paused and stared up at the night sky. "Evelyn. Marien named her Evelyn."