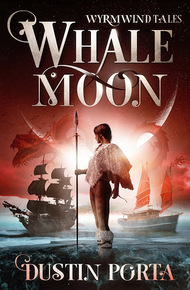 Dustin Porta was born in Oil City Pennsylvania, where Victorian oil money built boomtowns in the Appalachian foothills. It should come as no surprise then that his first books were post apocalyptic. After earning a degree in poetry, he took the next logical step and pursued a career as an amateur sailor. When his boat broke down in the small artist community of Fairhope, Alabama, he decided to stay. There he met his wife, Jennifer, a marine biologist and lover of fantasy novels. Together they have lived all over the Gulf Coast, studying fish, writing fantasy, and selling art, from New Orleans to Key West. Each move brings new studies, new inspirations, and new settings to put into fiction. They're currently on a much colder island up north, so readers should expect moose and puffins in the future.

Phehl never wanted to be pike keeper, but at least the job would be easy. Or so she thought.

When a ceremony goes wrong and a strange girl washes up on Whalegrave Beach, Phehl is duty bound to help. But there's a problem. The girl is a sharkling(tricksters of legend with smiles of dagger-sharp teeth). And she's not the only visitor.

Ships appear on the horizon. Some want to trade, others to plunder. When the sharkling is captured, Phehl must make a terrible choice. Let the monster be taken or risk everything to bring her back? Trust her new friend or trust her people? Either way she will have to be honest. About the secrets she's keeping, the lies she has told, and the lies of keepers who came before her.

Lyrical, hypnotic, and vividly imagined,Whalemoonilluminates a fantasy world like none other. With mythological resonance and the magic of the sea, this book takes the reader on a soul-striking journey of lies and profound truths.– Jeffe Kennedy

Phehl rested on the high dunes of North Isle and watched the deep crescent of the whalemoon as it sank toward the broodcalm sea. Small crabs picked-over the beach and a piper bird hunted the old coral jetty, poking its beak into little pools of water left by the outgoing tide. She closed her eyes and listened to the cadence of waves lapping at the coral rock.

An odd north wind began to stir, rustling her hair and lifting the hem of her ceremonial garment. Phehl frowned and tied her hair up, squinting at the sun as it crept nearer to the horizon. North winds were rare and portentous. It made her nervous about the task ahead. She was ready though, had practiced, and until now she had believed that she would be brave enough. She gripped the handle of the ancient whalepike that rested across her lap and watched the beach a minute longer. Two rays hunted in the shallows, scooting about in the ankle-deep waters, searching for crustaceans just below the sand.

Reluctantly, Phehl stood. Humming her father's whale-calling song, she raised the pike overhead then began the movements of the dance that would lead her down into the lapping surf of Whalegrave Beach. Each step caused the bracelets on her arms and legs to shake. Carved of whalebone, they told the stories of keepers past. One carving on her wrist depicted a whale smashing a galleon to bits, its fierce eyes and wide mouth seemed to snarl with the rattling of the bangles. Phehl swallowed and focused on the dance.

In her heart she hoped to never see a whale, let alone kill one. It seemed cruel to kill something that only came to hear your singing, but she tried not to think of that. How many pike keepers had danced down the beach on whalemoon as the crescent moon hung overhead, swirling the waters with the haft of the whalepike and singing the ancient songs? The whales had long learned to avoid Whalegrave Beach. Phehl's people were the ones who kept coming.

That didn't make her any less scared of the deep water where the old bones lay in the trench just off shore. When the ceremony ended, she was to swim down and dig up as many whale bones as she could before the sun sank into the sea.

The north wind blew again, stronger this time, rustling her sleeves and rattling the bangles on her arms and legs. Phehl gave the bones a little shake to cheer herself and hummed more loudly. The wind rose behind the chorus of the whale song and thrilled her, just as much as if she had seen the shadow of one of the great beings. But no shadows rose beside her. The wind fell off and the water lay flat again and ceased lapping against the shore. It was almost time.