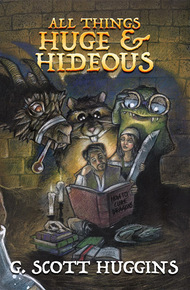 G. Scott Huggins grew up in the American Midwest and has lived there all his life, except for interludes in the European Midwest (Germany) and the Asian Midwest (Russia). He is currently responsible for securing America's future by teaching its past to high school students, many of whom learn things before going to college. His preferred method of teaching and examination is strategic warfare. He loves to read high fantasy, space opera, and parodies of the same. He has a column in the magazineSci Phi Journal.He wants to be a hybrid of G.K. Chesterton and Terry Pratchett when he counteracts the effects of having grown up. When he is not teaching or writing, he devotes himself to his wife, their three children, and his cat. He loves good bourbon, bacon, and pie, and will gladly put his writing talents to use reviewing samples of any recipe featuring one or more of them. You can read his ramblings and rants (with bibliography) atThe Logoccentric Orbitand you can follow him onFacebook.

All Things Huge and Hideous by G. Scott Huggins

Everyone says it was better in the Good Old Days. Before the Dark Lord covered the land in His Second Darkness.

As far as I can tell, it wasn't that much better. Even then, everyone cheered the heroes who rode unicorns into combat against dragons, but no one ever remembered who treated the unicorns' phosphine burns afterward. Of course, that was when dragons were something to be killed. Today I have to save one. Know what fewmets are? No? Then make a sacrifice of thanks right now to whatever gods you worship, because today I have to figure a way to get them flowing back out of the Dark Lord's favorite dragon. Yeah, from the other end. And that's just my most illustrious client. I've got orcs and trolls who might eat me and dark elf barons who might sue me if their bloodhawks and chimeras don't pull through. And that doesn't even consider the possibility that the old bag with the basilisk might show up.

The only thing that's gone right this evening is finding Harriet to be my veterinary assistant. She's almost a witch, which just might save us both. If we don't get each other killed first.

There is nothing quite as heartwarming as the veterinary memoir. Huggins bumps both the humor and the danger as our mild-mannered hero doctors' creatures that could end him with a single gulp. The stories keep you chuckling.– Daniel Potter

As I have previously noted, I am a big believer in the power of drinking to solve problems.

No, not my drinking. That's just stupid: even my mentor Arghash had known that. It's other people's drinking that solves my problems. For example: Two days ago, Djug the goblin got drunk enough to think he could get away with burgling an orc-lord's summer house. The orc-lord's dire-wolf ate Djug and broke off two of its teeth. Pulling the teeth for the orc-lord solved my problem of paying the rent for my veterinary practice.

Well, I didn't say it brought in repeat business.

But sometimes I join people in drinking, because we have the same problems.

In this case, I was drinking with Ulghash, Arghash's son. Ulg and I had grown up together. Only he became a doctor and a self-made man. Well, orc. And I inherited Arghash's veterinary practice.

Hard feelings? Why? Ulghash and Arghash both got what they wanted: namely for Ulghash to rise to a higher level than fixing up animals. I, on the other hand, as a human slave, wasn't going to start my own business in the Dread Empire. So we all got what we wanted: I grew up as a higher class of slave, and Arghash got someone to keep the practice going.

Even so, Ulghash was saying, "Days like this I want to take Dad's practice back from you." He drained half his beer. "At least your patients don't decide they know better than you."

"That's right," I agreed. "Their owners do it. I told you about the human vampire-wannabe Countess who kept her basilisk on a diet of blood, right?"

"Yeah, but at least you can feel sorry for the basilisk." Ulghash held his head in his hands. "I'm treating a clan chief for impotence. 'Use the herbs,' I said. 'The herbs work. And stop trying every day, for the Dark Ones' sakes. Relax a bit.' Did he listen?"

"Got someone else to look at it."

"Yep. He wanted it stiff. Well, it is now. I may have to cut it off before it gets infected. At least he can still piss, or he'd be dead already. He just has to watch the, uh. The range."

I groaned. Then I told Ulghash about the de-petrification unguent (because you really don't want to treat basilisks and cockatrices without a supply on hand) and sold him a jar at cost.

He shook his head. "It may be too late already. Blood doesn't pump well through stone vessels. But he can damn well apply it himself." He thanked me and we went home.

I hadn't been back in the office long enough to do more than check on the recovering patients – business was looking up for a change, now that Morrough was gone – when Harriet knocked on the door.

"I thought we didn't have any more appointments for at least an hour?" I asked.

"I think you want to see this one." Then she giggled. Not a "something's funny" giggle, but the "too weird" kind. Harriet found something weird?

This was a woman who had impersonated a dark elf for three years, tended bar for orcs, and crawled around in dragon guts beside me. Harriet didn't weird easily. I peered into the waiting room.

There was a wizard and a dwarf standing there. Either of those would have been fairly unusual. What was almost unheard of was that they were the same person. His beard was long and yellow. His staff was carved with runes. Tellingly, the staff appeared to have started life as a pickaxe handle. And he wore long mystic robes rather than armor or mining gear. Beside him was a small wooden cage with an iron-grated door. I couldn't see what he'd brought in.

"I need you to take a look at this," he said, imperiously. The merest suggestion of uncertainty tinged his voice. "So to speak." He raised the carrier. I looked inside. The interior was dark. I waited for my eyes to adjust.

The interior was empty.

I opened my mouth to ask what sort of joke this was, and that's when I heard the snoring.

Very carefully, using my left hand, I reached into the cage. I touched a warm, furry surface for an instant before it jerked away. I felt the wind of snapping teeth on my hastily-withdrawn hand.

"A weasel," I said. "And what did you do to it? Invisibility spell gone wrong?" The dwarf looked uncomfortable.

I rolled my eyes. "An item?" I asked. "If you tried, could you possibly be less specific?"

The dwarf looked puzzled. "No."

I sighed. Dwarves. Too literal for anyone's good.

I started over. "So the weasel ate a magic... item. And it turned the weasel invisible?"

"It was not supposed to be eaten."

"Well, you're going to have to tell me what it was, or I don't have a prayer of getting it out for you."

The dwarf finally said, "A ring. A plain, brass-and-silver ring."

"Brass, eh?" Sure. Because dwarves didn't think anyone else could recognize gold. "Okay. I can give you a laxative, and in a few days..."

"I need it as soon as possible, and I can't take the risk of missing it."

Despite my gentle hints that what followed was likely to be disgusting, the dwarf insisted on watching me induce vomiting.

"You haven't told me your name, sir dwarf," I said while we waited.

I thought about this, and then named a sum. The dwarf winced, but handed over a carefully-counted out purse without a word. And that's when I began to get really worried. I'd been expecting a name.

But just then, hacking sounds began to emanate from the cage. Sodden, half-digested food appeared from nothing and splattered on its floor. Eventually, wet, gleaming stomach fluids coated the bottom of the cage. But no ring.

The dwarf cursed, which sounded like he might join his pet in vomiting. "You must operate, doctor."

"On what?" I said. "I can't operate on something I can't see. Especially when I have no idea where it is. I'd kill it."

"No!" The dwarf opened and closed his fists. Finally, he said, "Is there nothing you can do? I was told you were a good animal doctor."

"This isn't doctoring," I said. "This is like performing surgery on a ghost, O Dwarf-Who-Will-Not-Be-Named. I'm afraid I can't help you with this. You'll just..."

"I can pay you," he interrupted me.

"It's not really going to matter how much you can pay me if I can't do anything," I said.

I felt the floor sway under me. "Bullshit," I said through the roaring in my ears.

"Ten thousand. In gold," he repeated. This time he was looking me in the eyes.