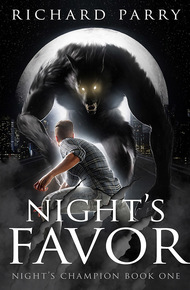 Richard Parry grew up on a steady diet of cartoons, observed around the edges of his parents' watchful gaze. He started writing bad fiction at an early age, but has had 30 (…plus) years to think about the error of his ways.

He's worked as an international consultant in one of the world's top tech companies, which sounds cool, but it wasn't all cocaine parties. Richard's managed to wrangle "Best Novel" and "Best New Talent" shortlistings from the Sir Julius Vogel Awards. He specialises in stories where heroes save the world/universe (hey, why limit yourself?) through action scenes and clever dialogue. His latest series starts with Tyche's Flight, an action-packed space opera where humans fight against evil mind-reading aliens. It is not a documentary.

Richard lives in Wellington with the love of his life, Rae. They are trying and failing to train cats.

Bad hangovers don't usually come with a pile of bodies.

Valentine's a nice guy with ordinary problems. That's about to change.

Surfacing after a drunken night Val finds drug megacorp Biomne has unleashed hired guns to bring him in: no questions, and no witnesses. A criminally insane Russian is also hungering at his heels. Could one ravening sociopath be worse than an army?

Val's newfound strength and speed might not be enough to save him. Gift or curse, he's got to master the monster within before he and everyone he knows ends up dead.

Night's Favoris the first book in Richard Parry's gripping Night's Champion trilogy. If you like supernatural suspense with great dialogue and heart-pumping action, pick this up today!

WARNING: contains bloodthirsty werewolves, doing what's right, swearing, use of alcohol, the family you choose, and a high body count. Seek your physician's advice before opening.

A unique take on werewolves that draws you in and doesn't let go, with a great mixture of gritty action, memorable characters, and engaging story.– Amy DuBoff

The van stuck out of the wall of Elephant Blues as if it had been thrown there, the skid marks of the tires showing where it had veered before jumping the curb. One door on the back was missing — they still hadn't found it — and the other hung loose on a single hinge, its handle missing. The laminated glass of its single window lay in a spider-webbed sheet on the pavement, a hole torn through the middle.

A hand sat beside it, the pool of blood diluting in the rain. It was a left hand, but no wedding ring — strong fingers, definitely a man's. It lay palm up, fingers curled like a dead insect. The fingernails were carefully trimmed and clean, as if the guy had managed a manicure just before having it torn off. At least it looked torn; not cut, not sawn, but torn. The bones of the arm stuck out from the stump, the stark white ends free of other tissue. Big floodlights kicked back the night, the fingers of the hand stretching tall shadows along the sidewalk. They hadn't found the rest of the body — not out here.

"Think he punched through the glass? Maybe got out? Lost his hand that way?" Elliot chewed on the end of his pen.

"Nah." Carlisle shuffled her feet through the puddles on the wet sidewalk, trying to get the bottom of her soles clean. She was getting rained on, and her pants were starting to stick to her. Well, more than they already were — Carlisle glanced at her red-stained knee and clamped down on the shudder. She should have kept her overcoat on, but inside the heat had made her want to retch, the memory of the slaughterhouse reek still with her. She tried to loosen her pants, but they were plastered on — Goddamn. "Knuckles are fine, and that's safety glass. No cuts on the wrist, not that I can see. Almost looks chewed. We've got to find the arm... Jesus, Vince. There's so many people in there." Rain was running down the back of her collar. "And they're all dead. How are we getting on with a witness check?"

"No one saw shit. I swear the only way we'd have less witnesses is if this was a Foundation for the Blind annual meet. Connolly and Malloney are in there too. Somewhere. They were good guys. Fuck's sake." Elliot offered his umbrella to Carlisle. "You're going to die of hypothermia. Take the umbrella."

It was pink, with Hello Kitty motifs in the fabric, a cheap white handle at the bottom. Carlisle snorted. "Where'd you get that thing?"

Elliot tilted it, looking at it as if for the first time. "You know, I really can't remember. It might have been the evidence locker." He shrugged. "I'm not buying an umbrella. Too damn windy around here. I'll call their families."

"Management thinking, buddy. Keep it, it's more your color. Leave the calls to me. I knew Connolly, a little." Carlisle looked inside the van, taking in the straps tethered to one side. There was some kind of harness, big enough for a man, but it was hard to tell with it all shredded like that. "I'd bet you your next night shift that those straps are nylon." She reached into a pocket, rescuing a stick of gum. Chewing, she stepped up into the van, wiping her wet blond —and just a little gray, right? —hair away from her face. She used the end of a pen to poke through the remains of the harness. Definitely torn — the frayed ends of the nylon hanging down from the steel wall, which had been pulled in slightly with whatever force had torn the straps. A bench seat was opposite the harness.

She took in the bullet holes on the wall with the harness. She'd noticed them before, but just how many hadn't sunk in. Lots of them — a quick eyeball said twenty or thirty rounds had been unloaded in here. Someone on the bench seat had fired into the opposite wall, probably into whoever was in that harness. Blood was smeared down the steel wall, with a small puddle on the ground. Not a lot — not enough for a guy with a bunch of bullets in him. Casings lay on the floor of the van, the bright of the brass distinct against the carpet. Two machine pistols shared space with them. No damn bodies though.

They were all inside.

"You need … just come here." The tone of Elliot's voice brought her out of the van in a rush, almost turning her ankle in the rain. She just missed —shit— the severed hand, nearly stumbling head first into the street. Elliot was looking up — above the van, the blood running down its white paint stark even at night. Carlisle followed his gaze to above the overhang of the Elephant Blues. A bronze elephant about the size of a small car sat on top, trunk proudly raised to the sky, one foot lifted. Elliot was staring at the elephant.

A body had been impaled on the trunk, easy to miss in the darkness. No head. Carlisle recovered first. "Different guy."

"What?" Elliot was a heartbeat behind, still shaken.

"Body's still got both hands. Just no head. Closest thing to a full corpse I've seen all night." The ragged ends of tissue, tendons, and the spine stuck out from the torso of the corpse. Blood was being washed down from the body onto the awning, onto the van, and into the street. "I hope Forensics did their thing out here. Our evidence is being rinsed away."

Elliot shrugged, just a little. "They got worse problems. Not one of them is going to see their wife for a week, the amount of reassembly needed in there."

"Probably won't see lunch for a week, either." No way you could have pastrami on rye after spending time in the Blues this evening. Nodding to herself, Carlisle walked over to the squad car. It had mounted the curb, nosing up behind the van, but back ten or fifteen feet. Both doors were still open, lights on, but no siren. It wasn't that the car had done the chase running silent; the siren was missing, the ends of wires sticking out where it had been mounted. The trunk was open, the shotgun missing — the officers had probably left the car in a hurry, but the lack of bullet holes in the car suggested it hadn't been under fire. The patrol unit had made the call in for support a half hour ago; it'd been Connolly on the radio, panic in his voice. A car chase in the center of the city with shots fired, real gangster stuff. No idea on number of people involved, no idea who was shooting, no idea why. Just shots fired — in pursuit — and then silence. They'd tracked the car by the GPS in it, finding it here at Elephant Blues. The engine was still running.

It made no sense. A half hour was a long time. Long enough for two good cops to die. Not long enough for their bodies to be cold. If they could confirm which bodies —which parts— were theirs.

The first evidence that Connolly and Malloney had made an armed response came at the entrance to the bar. Two spent casings were on the ground alongside broken glass and wood splinters. The officers had gone in loud. They'd headed into the bar, to be lost in the chaos of whatever had gone down in the Elephant Blues.

Carlisle looked over at Elliot, who was still looking up at the body on the elephant. "Look, stop fucking around over there. Have you found the CCTV system?"

"I found where it was. You know the bar?"

"Sure. I stepped over twenty smashed bottles of spirits. My socks smell of Midori."

"That's not what your socks smell of. But — look. You know it's crazy in there, right? Tables, chairs thrown around. Looks like some kind of Chuck Norris fight remake."

"Silent Rage." Carlisle swallowed as something hysterical tried to bubble through. She hadn't seen that movie in years.

"Silent Rage. That's the movie with the bar fight. Dan — I mean Norris — was in the bar..." Carlisle trailed off. "Whatever. What about it?"

"Right." Elliot gestured into the bar. "One of the tables was thrown right through the bar. Sort of unlucky. It went through the DVR."

"You're shitting me. Sort of unlucky? Through it? A thousand places the table could have gone —"

"Be fair, sister. The tables did go a thousand places. One of them was through the DVR."

"You're telling me we've got the bloodbath of the century in there, like someone's siphoning the local abattoir through the sprinkler system, and we've got no footage?"

Elliot looked at his feet. "Yeah."

"Fuck." Carlisle remembered her first steps down into the Blues that evening, seeing the tables knocked over, chairs thrown around. Blood, bits of tissue — there, someone's blood-drenched scarf — were everywhere inside the bar. The shelf that held spirits was shattered, the remains of Midori and Galliano and fifty other types of bottled joy mingling with the sea of blood on the ground. Carlisle's non-skid shoe covers had slipped anyway, and she'd fallen heavily on one knee in the gore. The hand she'd thrown out to steady herself had come back sticky with blood, the latex covering red and tacky. It was the first time she'd thrown up at crime scene in years.

She shook herself out of the memory. So her expensive suit would need dry-cleaning; that was just part of the job. "We might need to wait on Forensics then."

Elliot nodded, pulling his jacket tighter over the belly middle age and too much time behind a desk had given him. "Hell of a night."

"Yeah." Carlisle absently wiped water off her face. "Hell of a night."