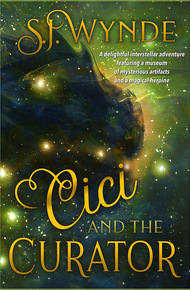 S. J. Wynde lives in a camper van named Serenity: exploring new places, appreciating serendipity, and practicing happiness. She likes long walks with her dog, cautious adventures, and creative meals. She hates writing and frequently gives it up as an unhealthy addiction. She just as frequently starts again because daydreaming is more fun when she can share her imaginary worlds with other people. She can be found online in all the usual places, as well as at www.sarahwynde.com.

Cici and the Curator by S. J. Wynde

A delightful interstellar adventure featuring a museum of mysterious artifacts and a magical heroine.

Cici Wainwright loves her job working at the ticket counter of the famed Guanyasar Collection, a museum of mysterious artifacts from around the galaxy. But customer service jobs always have one big drawback: the customers. When Cici's attempt to help an unpleasant guest goes horribly wrong, she's left trying to conceal the evidence.

Cici knows she ought to vaporize the two monster dogs. After all, they ate their owner. They're clearly dangerous. But she just doesn't have it in her. Instead she hides them, turning her one little mistake into one big disaster. Will she survive? And more importantly, will she lose her job?

For six months, she'd been a concierge, selling tickets and tour guides, and offering advice and directions, for the hottest exhibit on Tirquilk, the famed Guanyasar Collection. The best part — aside from the paycheck, which was decidedly high-end for a job a drone could do most of the time — was that every day brought a different experience into her life.

Of course, some of those experiences were better than others. The main drawback of a customer service job was always the customers.

Exhibit A: the woman standing in front of her, holding the leashes of two giant, slavering creatures. Cici had a security button under her counter, but she prided herself on never having used it. Would today be the day to break her streak?

"I shall enter now." The woman had a slight, but noticeable accent, as if her own language used more slithery sounds. "My dogs enter with me."

Dogs? Were those creatures dogs? Maybe. Cici wasn't familiar with any dog breeds that grew four feet tall at the shoulder, had fur that rippled like ocean waves, and slobbered green drool that sizzled when it hit the ground, burning tiny holes into the tile, but hey, it was a big universe and she was no dog expert.

"I'm afraid the rules are clear," Cici said. Before the woman could do more than draw herself up to a not-inconsiderable height, she added, "But perhaps there is an exception that would apply to your situation."

The woman looked down her nose at Cici. "Indeed."

Cici slipped off her stool and came around to the side of the counter. Away from her security button, but that wouldn't be a problem. This close she could smell the creatures, a not unpleasant aroma that reminded her of cilantro, slightly bitter but herbal. Or was that the woman?

She eyed the creatures. The one on the left was the bigger. Its dark eyes intent on Cici, it gave a tiny whimper, a squeak of anxious indecision. Food? Meat?

Neither, little brother, she told it firmly, inserting the thought into its head as the woman yanked its leash, wrapping the strap tighter around her gloved hand.

"Are these service animals?" she asked the woman.

Hungry, the creature thought. Hungry. It dropped back onto its haunches. The flow of green drool dripping out of its mouth increased.

Cici frowned. Hungry wasn't good. What was the woman thinking, to neglect her pets in such a way?

"They serve me, yes," the woman responded, her voice haughty.

"In one of the approved support categories?"

"Approved categories? And these are…?"

"Are you visually impaired?" Cici asked. "Do your animals guide you?"

"Certainly not." The woman's lips pursed as if tasting something unpleasant.

"No." A bite in the woman's voice said the questions were offensive, as if her sheer perfection should be obvious to any observer.

The dog on the right, the smaller one, quivered. Eat now? Eat now?

What do you eat? Cici asked it. Maybe they were vegetarians. A nice plaza across the street had an ample supply of plant life. Maybe they'd like to graze over there while their keeper visited the exhibit.

Meat. Flesh. Prey. MEAT. Cici winced as the dogs flooded her with images of the food that would delight them. Predators and scavengers. She should have figured that out from the bigger dog's anticipatory look at her, not to mention the drool.

But ick. How revolting.

"Do you suffer from a medical condition, such as epilepsy, for which these creatures provide warning or assistance?" she asked.

"Absolutely not." The slither in the woman's accent was more pronounced, her T sounds becoming more like S sounds as she grew annoyed with Cici's line of questioning.

"What about emotional support?" Cici suggested. "Do you need to keep your creatures with you for your psychological well-being?"

The woman's skin darkened, the blue deepening to a nice shade of navy. "Os cos noss!"

Cici had to think for a moment to interpret her words as, "Of course not."

"How do your animals serve you then?" Cici asked.

Couldn't the woman see that Cici was trying to be helpful? One polite lie establishing a societally-approved need for the dogs and Cici would wave her through the doorway into the exhibit with pleasure.

But no, the woman had to be difficult.

Not to mention not a very good pet-owner, she thought as the bigger dog sent a disconsolate sensation of a growling stomach her way.

"They guard me. They kill my enemies," the woman said with careful enunciation. She loosened her grip on the leashes, letting the dogs inch closer to Cici, and added, "And they destroy anything that impedes me. Or anyone."

"They serve me better when they are hungry." The gleam in the woman's orange eye was more predatory than those in the dogs' eyes.

"I see." Cici returned to her side of the counter. She typed a quick note onto the search function of her screen. Guard dogs? The data appeared immediately.

Not approved for admission.

Do you serve the woman willingly, little brother, little sister? Cici asked the animals without looking at them, typing a few more words into the search bar.

That sounded more like a yes than a no. Setting them free… well, that was probably beyond the scope of her job responsibilities. The woman would make even more of a scene, a crowd would gather, the dogs might attack someone… yeah, no, releasing the dogs was a bad idea.

But she'd found something she'd thought she remembered in the rules. "Aha," she said with delight. "Small animals are allowed. Small enough to be carried." She gave the woman a bright smile. "Is that an option for you?"

The woman stared at her, her nostrils flaring with disgust. "I have stated my position. I will see the collection with my guards and I will see it now. If you will not assist me, get out of my way."

"But I will assist you," Cici said. "Because that's my job."

She let her eyes narrow to a squint, almost closed, and took a deep breath, drawing power out of the air. She gulped more air, expanding her chest deeper and deeper, another inhale and another and another until her lungs felt as full as they could possibly be and the power surged in her veins like adrenaline, and then she let it all out, flowing in a tangled web of netted air and power to settle over the bigger dog.

Small, she thought to it. The dog began to shrink. Slowly at first, the waving fur compressing to its sides and then the head and body condensing. It lost an inch or two, and then three, five, eight, until it was smaller than the other, and still shrinking.

She watched it with a critical eye as she drew in another deep breath. Air, air, more air, and power with it, so much power.

She loved working at the Guanyasar Collection. The museum of artifacts was so rich with magical energies that it exuded into the surroundings, just waiting to be gathered by those with the ability to do so. Of course, that might be why the woman in front of her was so insistent on entering. She was probably a magic-user, too, hoping to gain strength from the emanations.

The dog was down to three feet tall now and the woman finally noticed, her smug expression disappearing. "Whass do you?" she squawked, before her face hardened into wrath. Dropping the dogs' leashes, she hissed a command.

Kill? Kill! KILL! The dogs' thoughts went from uncertain surprise to eager anticipation to furious hostility in no time at all.

In a moment of panic, Cici tried to do three things at once: speed the shrinking of the big dog, throw a barrier around the counter, and toss her second gathered net of energy onto the other dog, so it would grow smaller, too.

She succeeded in two of the three.

Both dogs bounced off the barrier, the former big one sliding down it to turn in confused circles on the floor, a three-inch tall, yapping mini-monster, while the smaller one, still closer to a solid five feet and three hundred fifty pounds, bounced off it in a recoil that caused a growl of pain. But the net landed on the woman.

She started shrinking. Cici's panic had given the spell enough extra energy that it went fast.

Within seconds the woman was barely a foot high. Before Cici could do anything, before she could even fill her empty lungs again, the dogs spotted the woman.

The little one didn't understand its new size. It wound up skidding along the floor, nose to the ground when its leap took it nowhere, but the other one was just as adept a killer as it appeared. The crack as it broke the woman's neck was as audible as the growls of satisfaction as it tore her body apart and gobbled the pieces down.

Cici swallowed. Oh, dear. Maybe she should have hit the security button after all. Gently, she crafted a third net of power and tossed it over the big dog, still eagerly crunching away.