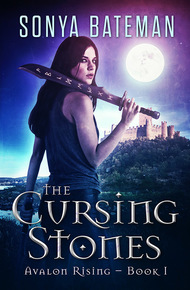 Sonya Bateman lives in 'scenic' Central New York, with its two glorious seasons: Winter and Road Construction. She is the author of popular urban fantasy series such as the DeathSpeaker Codex and the Gavyn Donatti series, as well as several standalone urban fantasy and paranormal books.

Under the name S.W. Vaughn, she writes psychological thrillers and crime thrillers.

The Cursing Stones by Sonya Bateman

Home is where the monsters are...

Rhiannon 'Rain' Finlay sucks at being a druid. Her gift of communicating with animals works just fine, but she doesn't know a Thurisaz rune from a Wunjo, and she can't even cast a circle of protection without a cheat sheet. That's why she decided to leave her tiny village on the Isle of Parthas, North Sea, for a normal non-magical life halfway around the world.

But when her beloved grandfather disappears along with a handful of villagers, she's forced to return home and use her gift — and her crappy druid magic — to help them. Unfortunately, she's not exactly prepared to face the very real monsters that are popping up all over, from mutant spiders to banshees, black dogs ... and worse.

That's when she learns all the crazy stories her father told her growing up, about the old deserted castle on the island having belonged to King Arthur, might not be so crazy after all.

The legends are real. They're returning to Parthas.

And they have unfinished business with Rain Finlay.

A reluctant hero in an Arthurian legend, this is a young woman's magical tale of adventure.– Charlie Lamb

A quarter moon in a clear night sky did little to illuminate the woods, and the penlight he'd brought along wasn't much brighter, but Danny MacCallan pressed on. He couldn't risk a lot of light out here — not if he meant to find out what the druids were doing.

Someone had to stop them.

Strange things had been happening in the village lately. Unusual weather, tide changes, charms and lucky objects gone missing. And then yesterday, one of his spring lambs had been mutilated. Left in bloody bits all over the meadow. His da' had started muttering darkly about the druids and the approach of the summer solstice, but he wouldn't do anything about it.

Well, Danny wasn't about to stand by and watch more of their flock slaughtered. Whatever they were up to, it was going to end.

He'd never understood why most everyone in the village still feared the druids. If there'd been an age of magic, it was long over. Technology ruled the world now — even this island, where the old ways had endured in some form for centuries, had cell phone towers and Internet access. The druid clan still inhabited the forest, but they'd stopped interacting with the village years ago, after that business with the female druid who'd run the apothecary. Closed up shop and withdrew, turned away anyone who came seeking their brand of help.

But it seemed they had a few tricks left in them yet. A bit of magic up their creepy, robed sleeves. It was high time for the druids to fade away with the rest of the old world and make way for the new.

Danny hadn't told anyone his plans. He'd been sure he could find the clearing where they met to cast their spells, the nearly perfect circle in the center of the oak grove. But he'd been walking more than half an hour now and hadn't come across the grove. It should have been much closer to the border of the woods.

He considered whistling to fill the silence, despite the endless childhood warnings from his mum about how whistling through the wood was an invitation for the faeries to snatch him. It was one thing to believe the druids had some small measure of power, which they'd proven in the past, and another entirely to think the Fair Folk were real. So whistling should've been fine. Still, he couldn't quite bring himself to do it — just in case the faeries had other ideas about whether they existed.

At last, he saw something ahead through the trees. A faint, pulsing glow. He switched off the penlight and crept toward it, certain he'd found some druid ritual he could put a stop to. And he would.

Danny MacCallan, village hero. It had a nice ring.

The closer he got, the stronger the light. Gradually he realized that it was like no light he'd ever seen. It shimmered with every color, including some he couldn't quite name — and focusing on those non-colors made his eyes water and his head swim.

Finally he was close enough to see the clearing, but this wasn't the oak grove. And there were no druids. In fact, there was nothing but the light, hovering in midair at the center of a rough circle of stones. Like a rip in reality.

As he stared, mesmerized, he saw shadows shifting within the light. Fast and fleeting, but moving with apparent purpose. Then one of the shadows stopped and something started to emerge from the shimmering rip. A leg, followed by another leg.

Then another. And another.

Danny tried to back away, but his feet refused to obey. All four legs were attached to the same torso. So were all four arms. There was a face made of nightmares, covered in blotched and bristling skin. Glittering red eyes the size of softballs. For an instant the light threw the creature into stark silhouette — and then the glowing swath winked out entirely, like a candle flame snuffed in the wind.

But the creature remained.

It advanced with soft chittering sounds that made the hairs on the back of his neck stand up. With monumental effort, Danny pivoted and ran, thinking stupidly that his da' had been wrong. That was no druid.

The creature was on him in a heartbeat. His last sight was black, writhing lips surrounding the stained ivory fangs that descended toward his throat.