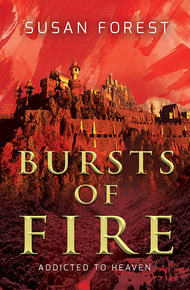 SUSAN FOREST is an award-winning fiction editor, has published over 25 short stories (Analog, Asimov's, BCS, & more), and has appeared at many international writing conventions. Susan grew up in a family of mountaineers and skiers, and she loves adventure. She also loves the big ideas found in SF/F, and finds fast-paced adventure stories a great place to explore how individuals grapple with complex moral decisions. Bursts of Fire, first book in her Addicted to Heaven series (followed by Flights of Marigold), confronts issues of addiction in an epic fantasy world of intrigue and betrayal. More information at http://addictedtoheaven.com/

Bursts of Fire by Susan Forest

Bursts of Fire begins an epic political fantasy of revenge, addictions, and redemption for three magiel sisters in an empire where magic has become suspect and where love and loyalty—for one's lover, one's family, one's country—are tested. If Heaven desires the very earth be burned, what place can those below hope for, when the flames come for them?

The Falkyn sisters bear a burden and a legacy. Their mother, the imperial magiel of the kingdom of Orumon, protects her people from the horrors of the afterlife by calling upon the Gods with a precious Prayer Stone. But war among the kingdoms has brought fire and destruction to their sheltered world. When a mad king's desire to destroy the Prayer Stones shatters their family, the three girls are scattered to the wilderness, relying on their wits and powers they don't yet master.

Assassin. Battle tactician. Magic wielder. Driven by different ambitions, Meg, Janat, and Rennika are destined to become all these and more. To reclaim their birth right, they must overcome doubtful loyalties within a rising rebellion; more, they must challenge a dogma-driven chancellor's influence on the prince raised to inherit his father's war: a prince struggling to unravel the mystery of his brother's addiction to Heaven.

This story takes you to a magical land of enchantment where strong female characters draw you into a tale for three sisters.– Charlie Lamb

The door, crafted of Arcan valley oak and inlaid with exotic woods imported from warmer lands—some from as far away as Aadi-of- the-Valley—gleamed in the light of Talanda Falkyn's candle. Though the hour was late, the door was unguarded. After all, these were days of peace and prosperity in the seven realms of Shangril.

A page admitted her into a dimly lit room. She was expected. Taking her candle, the boy departed and closed the door.

Dwyn Gramaret, King of Gramarye, stood at a generous, glass-paned window. The high tower looked out over his castle's courtyard and walls, over the dark streets of his city to the peaks and vales of his country, and beyond, to the Gods' star-spattered heavens.

The king turned and smiled a greeting as she entered. He was a tall man, powerfully built, and he wore a plain robe of fine, Gramarye yak wool. The prayer stone of the Chrysocolla, if he wore it, was not visible.

Yolen Barcley, the only other occupant of the room, rose from his seat before the fireplace. Like Talanda, he wore the simple, unbleached robes of a magiel, and his skin shimmered, a blur of time shifts identifying him as a magic wielder. A scarf was wrapped about his neck, for though it was summer, the high mountains were cold at night and the wind poked chill fingers through chinks in the stone.

"Magiel Falkyn," Barcley acknowledged her. "Please. Come sit by the fire." He gestured to a deep chair padded with fleece cushions. "King Dwyn and I are most curious to learn more about what brings you all the way from Orumon."

"Sieur." She bowed her head in respect and took the seat he'd indicated. Good beeswax candles and crackling spruce firewood scented the air.

"It is not often two magiels of the Great Houses meet face-to-face." Barcley poured each of them a glass of wine. An old red, likely from Arcan. "At dinner, you mentioned your retinue has been on an extensive journey."

King Dwyn took up his goblet. "How can we be of help? I gather you do not merely while away the long summer days?"

Barcley set the wine bottle on the table where it caught the glint of the fire's glow.

"Not nothing," King Dwyn reassured her. "Not if it sent you on such a long pilgrimage."

"I've seen an event in my future that disturbs me." She let the fingers of her left hand slip up to her throat, to touch the death token hidden in her neck band. "I've visited all the kingdoms of Shangril, from Teshe to Pagoras. No magiel of any of the Great Houses has seen what I have seen. Though . . . I haven't told King Artem's magiel yet."

King Dwyn peered at her with sharp eyes.

Barcley cradled his goblet in his lap. "Describe what you saw."

"First, I must tell you what I haven't seen." She rubbed at the fabric on the arm of the chair. "I have seen no future beyond . . . I'm guessing, a year, maybe two, from this summer."

The magiel's eyes narrowed. "You suspect your untimely death?"

The words, so plainly spoken, sent a wave of agitation through her stomach. "What I have seen is King Artem's troops outside Castle Archwood's walls. In siege."

King Dwyn set his wine glass down. "How many times have you seen this?"

His lips tensed to one side. "The kingdoms of Shangril have been at peace for five hundred years. We are prosperous. There is no reason for King Artem to attack Archwood."

"I cannot explain it."

"You're certain?" Barcley asked. "Glimpses of the future are fleeting, and by their nature difficult to interpret."

She knew he did not mean to insult her. "There's no mistake. The future is the future. I stood on Archwood's battlements watching archers in the king's colors shoot flaming brands at our walls, as my king ordered our own soldiers to return fire. By my estimation, this event will take place soon."

"You cannot tell how long into the future your travels take you," Barcley pointed out.

But in this case, Talanda could. "My king's daughter was present. She was not more than eight years old."

"And how do the other magiels of the Great Houses interpret what you have seen?" the king asked.

"None has seen evidence of war."

"Perhaps your king in Orumon will anger King Artem."

"My king has no cause to provoke Artem. Doubly none, now. In fact, he would make great concessions to avoid trouble." Talanda leaned forward, resting her wine glass on the table. "I have reason to think the conflict I witnessed is not confined to Orumon."

"What proof?" the magiel asked.

"The other magiels I spoke with as I toured Shangril this summer," she said. "Like me, they witness no future beyond a few short seasons." Kraae, her lover, father of her three daughters, had remarked as far back as fifteen years ago, that he'd never seen his old age. He'd dismissed the observation at the time, and so had she. Moments of a life lived out of sequence were meaningless . . . until over long life patterns began to emerge. But when Kraae gave her the seed of her second child, his remark came back to her and as precaution, she'd altered her second daughter's heredity. She'd used her magical ability to choose certain bits of her unborn daughter's makeup; made her less magiel in appearance. Why? She could not have said. A boding. Five hundred years of peace, but . . . talentless worldlings filled Shangril now, in greater numbers.

"Many magiels of the Great Houses are advanced in age," the king pointed out.

"So . . ." Talanda shook her head in disbelief. "All the magiels of the prayer stones will die? Through natural causes? Within the next year?" She held him in her gaze. "Sire, I'm not yet forty years old."

"These are times of peace," the king protested. "What event could be heated enough to throw Shangril into the chaos of war?"

"King Artem Delarcan called upon my services, not four weeks past. Did he not make the same request of each magiel of the Great Houses?"

"But could his unsavory ambition be related to my riddle?" Ambition. Power. Fear of the strength of magiels.

Talanda had pondered her impetuous choice again, long and hard, when Kraae gave her the germ of her third child. This time . . . she removed all hint of the wavering skin that would mark her youngest, a magiel. And the babe had emerged, to the gasp and consternation of all her midwives, fully worldling. By appearance.

Talanda turned to Magiel Barcley. "Sieur. You have lived no longer than I. Your health is good. What futures have you seen, beyond this year?"

The magiel licked his lips, his nostrils wide as he drew breath, and the tendons stood out on the side of his neck above the collar that held his death token.