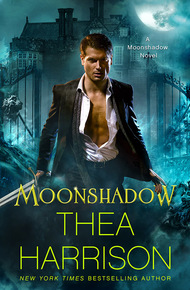 New York Time and USA Today bestselling author Thea Harrison resides in Colorado. She wrote her first book, a romance, when she was nineteen, and had sixteen romances published under the name Amanda Carpenter. She took a break from writing to collect a couple of graduate degrees and a grown child. Now she writes in a variety of genres, including sci-fi fantasy, paranormal and contemporary romance.

Thea writes in a variety of genres, including the award-winning paranormal Elder Races series and the Game of Shadows novels, and is currently at work on various new projects in sci-fi fantasy, paranormal and contemporary romance. You can check out her website and/or sign up for her newsletter at: www.theaharrison.com, and follow her on Facebook and Twitter.

Recovering from a shooting, LAPD witch consultant Sophie Ross leaves her job and travels to the U.K. to search for answers about her childhood. When she encounters a Daoine Sidhe knight of the Dark Court, she becomes entangled in an ancient hatred between two arcane forces.

Barred from his homeland along with his surviving brother knights, Nikolas Sevigny is embroiled in a conflict that threatens everything he holds dear. Only by uniting his people's resources can they hope to prevail against Isabeau, the deadly Queen of the Light Court. He will do anything and use anyone to return home to Lyonesse.

When Nikolas encounters Sophie, he sees a tool to be used. But Sophie has no intention of becoming anyone's pawn. As magic threatens Lyonesse, Queen Isabeau unleashes her merciless Hounds, and Nikolas and Sophie become embroiled in a race for survival. Meanwhile, the passion that ignites between them burns too hot to be denied and quickly turns into obsession.

A brilliant new chapter in an enthralling saga!Moonshadowkicks off a new trilogy in Thea Harrison's fantasticElder Racesseries. With a compelling heroine entering this world, this is a perfect place for readers to step into the ongoing story. The hero is intense, the heroine clever, and the sexual tension sizzling. Can't wait to find out what happens next!– Jeffe Kennedy

As she opened her eyes, she caught a glimpse of a strange landscape. A new wind blew through the apartment, ruffling her hair and bringing with it a faint, acrid scent like smoke.

The scent meant violence and danger. Like other messages the wind brought to her from time to time, it wasn't a physical scent but intuitive and all too familiar.

Adrenaline spiked, causing a ghost of fiery pain to ripple through her body, localized in three places—her left shoulder, right thigh, and just under her ribs on the right side. As she pressed her hand to her abdomen, the figure of a man appeared.

He was turned away so that she looked at dark hair, the long, strong line of his neck, and broad shoulders.

He stood so close she felt like she could reach out to touch him and, oh my gods, all that Power he carried. How could one physical body contain it all? It was as if his skin thinly veiled a lightning bolt. He wasn't human. He couldn't be. He had to be one of the Elder Races.

The man was so vivid he made everything else around her pale by comparison. Even though she knew better, she lifted one of her hands and reached toward him. He was only a vision. He wasn't really here in her apartment.

Then he turned his head, and he looked straight at her.

No. That had to be an illusion. He couldn't be looking at her, not in her vision, stimulated by a spell of her own casting.

She received the impression of a strikingly handsome face, the planes and angles so sharp they appeared as if cut from an immortal blade. His glittering dark eyes held an indomitable will and a chilling ferocity.

Power shifted as he brought his body around to face her. So smoothly he moved, with a killer's grace that was purely inhuman. It caused the tiny hairs at the nape of her neck to rise. He held a sword clenched in one fist, and the long, wicked blade dripped with crimson blood. The gold of a heavy signet ring winked on his ring finger.

The sight slammed into her along with a realization.

He turned to face her.

He saw her and turned to face her.

Shock rocked her back in her seat. She parted her lips to say something. Whoops, or maybe Hi there. Or, I'm sorry.

The kind of thing you would say if you accidentally dialed a wrong number, or stepped on someone's foot, or got your psychic wires crossed.

While she stared, the male's fine-cut nostrils flared. He flung a hand out toward her, fingers outspread, his own cruelly beautiful mouth shifting as he spat out a word. A lightning bolt of Power shot toward her. She felt it coming, a spear of pure, sizzling malice.

That wasn't supposed to happen in a vision either. What if it hit her?

Before she had fully formed the intention, she grabbed the edge of the magic cloth and yanked. Stones flew around the kitchen, breaking the pattern.

The vision shattered so hard it left her head aching, or maybe that was an echo from the psychic attack the man had flung at her. He vanished, along with the landscape. The lightning bolt never landed, although the image remained burned into her retina.

Her heartbeat galloped like a runaway horse while adrenaline pounded through her veins. As her vision cleared, she pressed shaking fingers against equally unsteady lips and looked around the familiar landscape of her apartment, taking in each detail in an effort to ground herself.

What the royal fuck was that? She had never experienced anything like that, and she had been practicing magic for as long as she could remember. Had the vision been so vivid it simply overwhelmed her sense of her immediate physical reality?

It couldn't have been real.

Her head said no, but her gut said yes. He had behaved exactly as though he had seen her. She had sensed his Power, felt the attack flare toward her like a thrown spear. Her gut had no doubt that if that spear had hit, it would have injured her, perhaps severely.

What did it mean?

It took several breaths for her to regain her composure enough to leave. A dull throbbing took up residence behind her eyes. She strode into her bedroom, opened the small closet safe, pulled out her gun, and tucked it into the concealed-carry pocket of her purse. As she left the bedroom, she glanced one last time at her percolator with a deep sense of bitterness.

She should have had that cup of coffee.