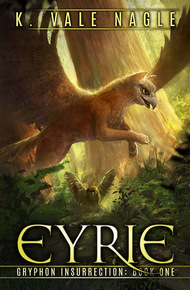 After surviving several pulmonary embolisms and multiple organ failure, he kicked his writing into high gear and saw his first short story and novel publications. When he's not writing creature fantasy or fighting for his life, he enjoys reading, archery, and exploring the Rocky Mountains with a tabby cat by his side.

A bloody massacre. A looming civil war. Can two opposed gryphons work together to save their kind?

Zeph thrills at the wind in his wings and the hunt for wild parrot. As a simple forest gryphon, he never thought much about his sophisticated city-dwelling cousins living in the lofty eyrie at the edge of the woods. But his carefree life turns upside down when he comes across a young city gryphon stunned by her discovery of a field littered with slaughtered animals.

Kia always has her beak in a book. But when her best friend goes missing, she flies down to the woodland and gets tangled up with a wild country gryphon and a shocking conspiracy. With food in short supply and war on the horizon, Kia must choose between forsaking her own or allowing Zeph's people to be wiped off the map.

Forced to overcome their prejudice and misconceptions, the unlikely pair races against time to prevent an apocalypse.

Can Zeph and Kia unite their species before a fiery conflict destroys them all?

Nagle builds a lush world to tear it asunder in this gripping tale of war and the ruin it brings. For hope to exist, a pair of bitter rivals must learn to find strength in their differences.– Daniel Potter

Thirty feet up a tree that reached twice that height into the forest canopy, Zeph clung beak-down and surveyed the forest floor. Several large, flightless ground parrots pecked at crushed berries. Violet stains covered their green plumage. The berries were casualties of a conflict much higher up. Two flying squirrels fighting on the sunny tree tops had dropped them, splashing Zeph with juice when the berries landed. While the rush of sugar the berries offered was tempting, that was short-term thinking. Instead, he groomed the juice from his feathered face, left the area, climbed one of the many massive redwoods, and glided back to a good vantage point. The local ground parrots had become wary of the fresh scratches on trees that marked the climbing habits of gryphons. Not that ground parrots were particularly bright birds. The species, as a whole, survived mostly by virtue of laying many eggs, foraging effectively, and running away at the slightest provocation.

A plump parrot, a full four feet in height, shouldered the younger birds out of the way. There were a few squeaks of indignation, then the birds all froze and looked around to see if anything had heard them. Zeph remained unmoving against the tree, his banded brown fur and feathers matching the slits of light against the bark. Backward-facing dewclaws on each paw held him in place and even allowed him to slowly climb higher, should the need arise.

Several more parrots peeked out from the overgrowth and jostled each other to peck the last of the berries. Just as the original plump one took a swipe at its rivals, Zeph pounced from the tree, snapping the parrot's spine on impact. The other parrots fled in all directions, and he set off after the next largest. Thick ferns blanketed the dimly-lit forest floor, providing cover if the parrot could slip out of view. Heavy storms normally provided lightning to burn away the ground cover during the summer months, but this year there hadn't been any fires, and the vegetation was at its thickest in living memory. The parrot squeezed under a rotting log. Zeph leapt over it and spread his wings, gliding in pursuit. Thick vines and branches bred agile forest gryphons. Gryphons had hollow, muscle-covered bones to enable flight. Bones that broke easily if they caught on something.

He did his best to drive the parrot towards the edge of the forest. Once it was in the grasslands between the weald and the eyrie, it would be an easy catch. Right as well-groomed feathers, the parrot burst out of the forest edge, and Zeph pounced. He held it down with his ever-useful dewclaw and snapped its neck with his beak.

The sun beating down on his wings was a pleasant change from the shade of the forest, so he spread out his plumage and looked towards the eyrie. The opinici had built a large city at the northern tip of the Redwood Valley, nestled against the mountains. The forest around the eyrie was well-maintained, and they'd cleared a large swath of trees between them and the weald to create grasslands for capybara herds and farms. Ground parrot was tastier and healthier than capybara, but parrot meat's unique flavor made it worth significantly more than just its nutritional value to opinicus merchants. The parrots around the eyrie had fled when the opinici cleared out the undergrowth, and the untamed gryphon lands were the only place to get them now. Zeph looked to see how the capybara herds were doing.

Instead of capybaras chewing and lazing about, the ground was soaked in wet blood. The fence at the edge of the grasslands had been destroyed, and a trail of dark red led into the weald.

He grabbed his kill in his beak and retreated to the safety of the trees.