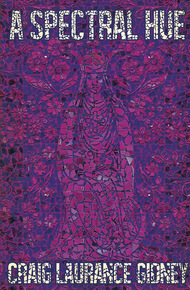 CRAIG LAURANCE GIDNEY is the author of the collections Sea, Swallow Me & Other Stories and Skin Deep Magic, the Young Adult novel Bereft, and The Nectar of Nightmares. His work has been nominated for the Lambda Literary and Gaylactic Spectrum Awards, and he has won both the Bronze Moonbeam and Silver Independent Publishers Book Awards. He lives in his native Washington, DC.

For generations, the marsh-surrounded town of Shimmer, Maryland has played host to a loose movement of African-American artists, all working in different media, but all utilizing the same haunting color. Landscape paintings, trompe l'oeil quilts, decorated dolls, mixed-media assemblages, and more, all featuring the same peculiar hue, a shifting pigment somewhere between purple and pink, the color of the saltmarsh orchid, a rare and indigenous flower.

Graduate student Xavier Wentworth has been drawn to Shimmer, hoping to study the work of artists like quilter Hazel Whitby and landscape painter Shadrach Grayson in detail, having experienced something akin to an epiphany when viewing a Hazel Whitby tapestry as a child. Xavier will find that others, too, have been drawn to Shimmer, called by something more than art, something in the marsh itself, a mysterious, spectral hue.

From Lambda Literary Award-nominated author Craig Laurance Gidney (Sea, Swallow Me & Other Stories, Skin Deep Magic) comes A Spectral Hue, a novel of art, obsession, and the ghosts that haunt us all.

Craig and I met at Gaylaxicon too, right before his first collection, Sea, Swallow Me came out. I fell in love with his stories when I read the book. Since then, we've met up at multiple events and I've gotten to watch him grow as a writer (and have continued to enjoy his company!) ever since. A Spectral Hue is a brilliant novel, weaving strands of art, madness, magic, queerness and identity in a story about generations of Black artists in a strange town at the edge of an even stranger marsh. – Catherine Lundoff

She knew the names of everything in the swamp. Every animal and flower. But she did not know her own name. She went through the naming ritual every now and then, hoping that the words would spark some stray memory. Naming things gave them meaning. Surely, she had a name, and there was some meaning as to why she was here, and what she was meant to do.

These words shaped the world. Blue sky, brown-green water. (She didn't say these things aloud). There were some things she knew, the dwindling embers of memory in a pit of ash. She knew that her name was also the name of a flower. How she knew this, she couldn't say. But the knowledge was just there, as was the fact of her sex and the clothes she wore. Sometimes, this frustrated her to no end. She would scream and scream. But no one came. Even the animals didn't startle at her voice. It was useless. Eventually, she sat down on a log or an islet, became statue still. Maybe she even slept a little.

Time stood still here, wherever here was. There was a wrongness about the place. It was a beautiful place. It was a dead place. Birds flew but made no sound. It was neither hot nor cold. Water rippled, but it wasn't wet. And she was never hungry.

Was this Heaven? If so, where was the Lord and the Redeemer? Where were the angels, with their dove-white wings and sun-like halos? She expected a lush garden, where lions laid down with lambs. Where rivers of milk and honey flowed. Maybe she was the only angel here. She wore a long white robe that never got dirty, no matter how deep she waded into the muck. No grass stained her robe, and she emerged from the water dry, the fabric stiff with starch.

One day, something changed. The air began to fill with scents. Of salt water, and mud and the tang of algae. Clean smells, mostly, but there was some rot and some sweetness there as well. She put her hand in the dark water. It was cold! There was pressure and humidity in the air, and mist rose from the waters. The woman felt life in the wetlands, life and death.

Was she no longer alone? She couldn't explain it, but she sensed something coming. Someone. Maybe more people, or other things.

She found that the landscape had altered. The grass had more color, sheaves of gold and emerald. Flowers starred the various islets and shores, ruffled and tubular, frilled and ruched, in bright colors winking between the tufts of razor grass.

She herself had altered. She no longer wore the shapeless white robe. She was in a gown as soft and delicate as spider silk spun about her body. It was embroidered like the finest lace.

Best of all, it was the most amazing color. It was the same glorious color as her favorite flower that grew here and there in the marsh. It was a color you sometimes saw in the sky when the sun was setting, staining the clouds. A color not quite pink, not quite purple. Her favorite flower was called the marsh-bell. It was a slender stalk crowned by a perfect sphere of blossoms that hung down in a bell-like fashion.

She saw only one marsh-bell in her timeless time here. A solitary bloom of bright color in all of the watery world. Now, she was the second bloom, in a way.

She wished that more of them grew here, spotting the land from horizon to horizon.