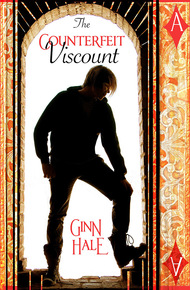 Ginn Hale resides in the Pacific Northwest with her lovely wife and wayward cats. She is an award-winning author of science fiction and fantasy, as well as an avid coffee-drinker.

Hale's first novel, Wicked Gentlemen, was a finalist for the Lambda Literary Award and won the Spectrum Award for Best Novel.

The Counterfeit Viscount by Ginn Hale

When Prodigal devils begin disappearing, Archie Fallmont, Viscount of Granville, finds himself in the unenviable position of being required to investigate. He has, after all, sold his soul to the handsome devil—and flashy dresser—Nimble Hobbs. Now Archie must join Nimble, sleuthing out the knotty scandals of noble families and an infamously exclusive club.

But Archie and Nimble are soon up against much worse than absent actresses, debauched drunks, and dreadful poetry recitals. Bullets fly and top hats fall, as secrets are unearthed and a murderer decides to put an end to their inquiries.

Ginn and I met at Gaylaxicon in 2007. I remember that I found her completely charming and we hung out a lot, talking about writing queer fantasy and the then new small press that she was starting up with her wife, Blind Eye Books. I bought her award-winning book, The Wicked Gentlemen, on the spot. I loved it and have loved everything else's of Ginn's that I've ever read, including these two novellas. – Catherine Lundoff

For Archibald Lycrugus Granville, Viscount Fallmont, the vast majority of days came and went with the genteel luxuries of fresh-cut flowers, boots polished to a razor gleam, and suppers served on gilded plates. Nights he roved between charming lovers and card games, at which he never lost more than he won.

Butter upon bacon, as Nimble described it.

Archibald owned a stable of high-strung racehorses and retained a vast staff at each of his estates—though he rarely strayed from his elegant townhouse to visit either. From time to time, he pretended to woo the latest foreign heiress released into the staid waters of the peerage, and on occasion he indulged the expenses of a handsome artist or pretty actress.

Aside from the wide red shrapnel scar hidden beneath the snowy breast of his shirt, he appeared wholly unmarked by hardship. Fair, tan, and slim, he passed for a blithe youth even now at twenty-five.

His could've been a carefree life, except for the one day every third month when he descended to the pits of Hells Below and paid his devil.

March 21st, he woke before daybreak and slipped away from his attentive staff and current houseguests. He walked through the wan blue light, alongside herb girls and the last of the night patrolmen. Somewhere to the west, men called out the wonders of their coffee carts, and Archibald imagined that he could smell the aroma of the bitter black stuff rising on the clouds of steam that drifted from the river and blanketed the streets.

Sunlight burned through the fog by the time he reached the cold, clean room he rented at the Briar Hotel. There he exchanged his fashionable sable coat, his glossy top hat, and his silver pocket watch for the oilcloth cloak and worn cap common to the multitude of vagrant war veterans he'd once numbered among. He took up his bludgeon of an ironwood walking cane and traded his calfskin shoes for the battered army boots that had been far too big for him when he'd first been issued them at fifteen.

The brass mirror on the dresser door cast him in golden tones, but he certainly didn't cut the figure of Viscount Fallmont anymore. Just plain old Archie now, and not so important that it would do anyone any good to mind where he went or what company he kept.

He departed the Briar by a back door and clipped through the bustling streets, leaving the realm of marble facades and large green parks far behind as he passed through blocks of modest brick businesses, and tramped on across the Crown Tower Bridge. Out in the less seemly section of the city, he picked his way through narrow alleys of cramped tenements, roaring factories, and sparkling gin palaces already filling up with shadows of human beings seeking bright oblivion. Here a few people knew him as Archie—an apple seller and a cat's-meat man. They exchanged friendly greetings and a little news, then went their separate ways.

At last he reached the towering granite arch that rose over the worn stone stairs leading down to Hopetown—much more commonly known as Hells Below. Archie descended into the humid shadows slowly, admiring the ornate, soot-stained beauty of the mosaics decorating the walls on either side of him. Even through the ages of dirt and in the dim light, he made out bright shards of color and fantastically graceful figures. The mosaics supposedly chronicled the glorious day, hundreds of years ago, when the terrifying and beautiful armies of Hell had ascended to accept salvation and conversion at the hands of the church. Gleaming serpents and winged lions numbered among the burnished gold figures of fallen angels and towering warriors. Satanel, Leviathon, Sariel, Rimmon. Archie traced his finger over the surface of the inlaid metal-and-glass tiles, admiring the magnificence of those beings who'd once claimed dominion over lightning, raging seas, and the souls of the dead.

Not that anyone like them persisted in the vast ghetto beneath the sprawling city of Crowncross nowadays. Their descendants were called Prodigals, and most labored in dark, hard, and hazardous industries, where their natures supposedly lent them resistance to poisons, smoke, and exhaustion. Many weren't too easy to recognize at a distance, though up close their yellow eyes, black fingernails, and jagged teeth tended to give them away, as did the citric scent of their sweat. But beyond those superficial traits, most Prodigals had as much in common with their preternatural ancestors as Archie had in common with Lord Bottham's pet macaque. There were the exceptions, however.

As had become his habit, Archie paused, studying the mosaic. One devil's familiar figure always held his attention. Broad and bronzed, with black hair and eyes as yellow as lemon drops. Even obscured within a procession of infernal dukes and damned princes, that single devil seemed to gaze back at Archie with an unreasonably amused and assured smirk. That was the face of a devil who knew he possessed rare and wondrous powers.

Archie could have sworn it was his own Nimble Hobbs, just about to say, "One day every three months, you've sworn to be mine, body and soul. So, haul your pampered ass down these dirty stairs and pay me what you owe me, Archie."