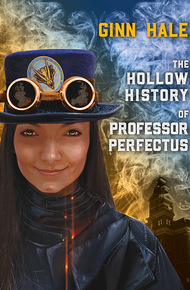 Ginn Hale resides in the Pacific Northwest with her lovely wife and wayward cats. She is an award-winning author of science fiction and fantasy, as well as an avid coffee-drinker.

Hale's first novel, Wicked Gentlemen, was a finalist for the Lambda Literary Award and won the Spectrum Award for Best Novel.

The Hollow History of Professor Profectus by Ginn Hale

1858 "Warring mages open up a vast inland sea that splits the United States in two. With the floodwaters come creatures from a long distant past. What seems like the End Times forges a new era of heroes and heroines who challenge tradition, law, and even death as they transform the old west into a new world.

A brilliant magician and her beautiful assistant light up stages with the latest automaton, but the secrets both of them are hiding test their trust in each other and pit them against one of the most powerful men in the world.

Ginn and I met at Gaylaxicon in 2007. I remember that I found her completely charming and we hung out a lot, talking about writing queer fantasy and the then new small press that she was starting up with her wife, Blind Eye Books. I bought her award-winning book, The Wicked Gentlemen, on the spot. I loved it and have loved everything else's of Ginn's that I've ever read, including these two novellas. – Catherine Lundoff

In 1858, during the Arrow War, mages had torn open a vast and unnatural chasm, flooding out most the southern states and dividing the east and west of America with a the Inland Sea. And up in the Rocky Mountains, behind the roaring saltwater, had come ancient creatures. Theurgists and naturalists called them dinosaurs, but most folks knew them as monsters. Twelve years after that, just as the waters had calmed and cattlemen had learned to rope and drive herds of burly leptoceratops, another battle between mages had unleashed the Great Conflagration. Eastern towns all across the salt marshes and as far north as Chicago had caught light. In Peshtigo, more than a thousand people had burned to death.

Twenty-two years on, people still hadn't forgotten the terror of those merciless flames. Hell, I'd been three then, but even I still woke shaking from dreams of my parents screaming as a blazing cyclone of brilliant embers engulfed them.

So I understood what all these good, natural folks feared. I even understood why they wanted free mages like me rounded up and placed under the godly thumbs of theurgists. They felt terrified and powerless. They wanted magic if it came with assurances, federal offices, and communion wafers. They wanted mages in the world—transmitting messages across the oceans and powering turbines—so long as they had us on leashes and electric collars

But I knew the man who'd created those damn collars, and he gave me worse nightmares than my parents' deaths did.

I'd also come to understand how corrupt theurgists could be. The papers were full of news of how the US Office of Theurgy and Magicum had ordered the 7th Cavalry to suppress Lakota free mages and their Spirit Dances. That hadn't been upholding the law; it had been a massacre. I'd rather have lived all my life as a wanted outlaw than to have lent my small power to the men responsible.

Geula and I agreed on that much. She didn't share my suspicion of all theurigists as much as she dreaded the attention of the men who hunted bounties. Audience expectation wasn't the only reason she'd abandoned her real name when she'd fled Boston ten years ago.

We weren't either of us angels—though Geula could look the part with a pair of dainty white wings strapped to her dress and a brassy halo pinned to her curls—but we didn't hurt anybody. Not with our stage performances, and not when we kissed and delighted each other in the privacy of our little room back stage.