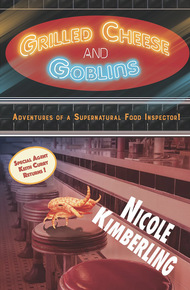 Nicole Kimberling is a novelist and the senior editor at Blind Eye Books. Her first novel,Turnskin, won the Lambda Literary Award. Other works include theBellingham Mystery Series, set in the Washington town where she resides with her wife of thirty years as well as an ongoing cooking column forLady Churchill's Rosebud Wristlet. She is also the creator and writer of "Lauren Proves Magic is Real!" a serial fiction podcast, which explores the day-to-day case files of Special Agent Keith Curry, supernatural food inspector.

Keith Curry has his work cut out for him.

NATO's Irregulars Affairs Division is a secret organization operating in thousands of cities around the globe. Its agents police relations between the earthly realm and those beyond this world, protecting citizens from both mundane and otherworldly dangers.

Former chef turned NIAD food inspector, Special Agent Keith Curry found out about magic the hard way and is now determined to keep dinner safe for everybody. Includes the novellas "Cherries Worth Getting," "Magically Delicious" and the never-before-published "Bring Out Your Best" plus bonus shorts and more!

Nicole and I met at various Gaylaxicons and ClexaCon over the years. She and Ginn run their own terrific small press, Blind Eye Books, and they've provided invaluable support to me as I've gotten my own small press up and running. Nicole is also a talented, hilariously funny writer! I'm so looking forward to people discovering her work for the first time with this tale of magic, mayhem and food inspection. – Catherine Lundoff

For reasons unknown to Agent Keith Curry, food carts proliferated on the mostly rainy streets of Portland, Oregon, like they did in no other city in North America. Their awnings sprang up like the chanterelles in the Pacific Northwest forest, sometimes filling an entire parking lot.

Keith preferred visiting these eateries because many had permanently rented parking spaces and settled down like oysters cementing themselves in place. The parking lot near his hotel supported one of these colonies so he thought it might be as good a place as any to begin his investigation, though he didn't expect to find much.

Probably clean as a whistle.

Keith stepped up to the cart—a converted Airstream that sold nothing but grilled cheese sandwiches—and ordered a "Kindergartner"—American cheese on white bread. A slight vibration came from his wrist and he glanced down at his watch. It was a prototype designed to alert a human wearer of the presence of extra-human beings. Now the numeral seven shone blue, which indicated that a faerie had come within fifty feet of him, setting off his proximity alarm. Briefly, he scanned the people queueing up to the food carts, wondering which customer hid a fae nature. Business heels lady? Sparkly hippie juggler, busking? Little blond kid eating a snow-cone? It could be any of them—or maybe all of them. Probably more than one faerie was abroad, actually, this close to the upscale condos in the Pearl District. Faeries didn't concern him this time around. What he needed to watch for was the red three that indicated the presence of goblins.

He returned his attention to the amiable, bearded guy currently buttering the bread that would shortly become his sandwich.

"You mind if I ask you a question?" Keith asked.

"Go right ahead." The bearded guy slapped the bread down on the food cart's small but impeccably clean flatiron and applied the cheese.

"Do you know where a guy can find any flesh joints around here?"

The cook laughed. "There're too many strip joints to count, man. Just google 'stripper.' You can get any kind you want."

The cook looked up at him in mild disdain. "Not really my style."

"Not that into meat?" Keith asked casually.

"Not into performance art shit," the cook replied. "I believe in cooking food, not eating it raw in front of a smoke machine while some pretentious dick plays lame beats."

"So you've never been to the Theater of Blood Carnivore Circus?"

"One of my buddies went to it, but I don't really remember where he said it was. Like I said, it's not my thing."

"Do you think I could convince you to call him and ask? I'm only in town for a few days and I want to experience the entire Portland food scene before I put up my report."

At this the bearded guy perked up.

"You a food critic or blogger or something?" He handed Keith the sandwich. It smelled amazing—like something his mom would have served alongside a bowl of canned tomato soup.

"Or something." Keith winked.