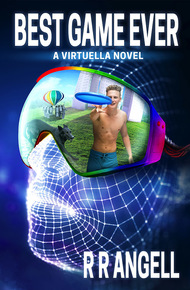 R. R. Angell is a queer writer (he/him) whose short fiction has been around for more than twenty years in literary and science fiction magazines and anthologies. Most notably: The Baltimore Review, Asimov's Science Fiction, Interzone, Chelsea Station, Best Date Ever: True Stories That Celebrate Gay Relationships, Compelling Science Fiction: The First Collection, Sex and Chocolate, and in Frank M. Robinson's memoir, Not So Good A Gay Man (afterward).His LGBTQ YA VR AI science fiction romantic thriller, BEST GAME EVER, published in May 2019.

In this fast-paced LGBTQ YA VR AR AI thriller, a group of gay, nonbinary, and straight college nerds onthe Virtual Campus Challenge team are racing toward a deadline when Robby's roommate dies of anapparent suicide after playing their favorite VR first-person flyer game, Flying Squirrels. Robby suspects foul play. With the help of his teammates, Robby exposes a threat to all VR gamers, and the SaikoVR AI game engine, Virtuella, fights back.Can Robby and his friends defeat Virtuella, save the world, and find love in the BEST GAME EVER?

Bob and I talked about this novel when we met up at Helsinki Worldcon a couple of years ago, back when it was still in progress, and I was very intrigued. He's a fascinating guy, with a lot of technical expertise and years of short story writing under his belt, including stories in venues like Asimov's, Interzone and The Baltimore Review so I knew that this novel, Best Game Ever, was going to be well worth reading. I think you're in for a treat. – Catherine Lundoff

Miles and I have never truly been friends. We're more like mating cats without the mating part. We were fine working together in sharespace through our augies, or in a virtual reality game (our avatars and game characters are friends) but lately we didn't get along well in real life.

Miles is gender-fluid, which means that sometimes they are male, sometimes they are female, and most of the time they are somewhere in between. I've always been fascinated by them, but it's fair to say they are mostly frustrating. With Miles, you never knew who you were going to get.

Except in VR gaming campaigns because they are always a Black Mage. You can count on it. Maybe that's why I was impatient for the new SaikoVR system upgrade? We could go on a mission in Realm of Quests with our usual companions and call a truce. Maybe talk things through while fighting a monster or something? After what I said last week about their homophobic, bullying, ego-centric gorilla of a boyfriend with the IQ of a baseball bat who was beating the life and happiness out of them (yes, I said that), Miles told me the only way I could make them happy was if I jumped off a roof, got eaten by a dragon, or stepped into a different dimension and disappeared entirely. We hadn't been on a campaign together since then, and I wasn't sure they'd cast a spell to save me anymore, even if that meant the whole team lost.

I'd spent Monday's data signal processing class in the back, ignoring Professor Lieber's notes scrolling across my augies and staring down at Miles in the front row. I did feel bad about what I'd said to them. I could have been more diplomatic, but I'd never been any good at that kind of stuff. Besides, someone had to say something.

Miles had a metallic silver headscarf covering their brown hair and hiding the frames of their augies. A lime green top under a hot pink overshirt with rolled-up sleeves highlighted their pale forearms. They wore black skinny jeans again, third day in a row. Their legs were crossed, showing mismatched socks, one green and one pink. Cordovan penny loafers. They put dimes in the slots instead of pennies, so I can't even make that stupid joke about getting my two cents in. But that was Miles, always in for more.

CB, the personal AI assistant I'd made in high school and the project that won me a partial scholarship to Bolin, chose that exact moment to interrupt.

You have an urgent message from your roommate. JV says to tell you that the new operating system finished its install, and Virtuella is killer. Flying Squirrels is loaded and ready to play. He doesn't know how long he can wait for your sorry ass to get back before he takes to the air.

"Mr. Papenaugh?" Professor Lieber called up from the stage. "Do you have something to say about this particular transformation?"

"Need I remind you that all devices should be set to class mode?"

"I forgot. Sorry." I wanted to disappear.

The professor waved his eChalk at me and went back to lecturing. My ears were on fire. Everyone was staring at me, including Miles, and I could hear them all thinking, "Loser!"