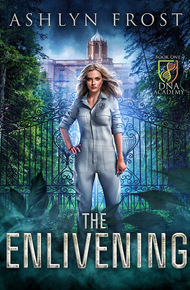 Ashlyn Frost studied creative writing at Stanford University. She knew she wanted to be an author from the age of seven and has been writing ever since. When she is not writing, she can usually be found playing D&D with friends or wishing she were in Rivendell.

The Enlivening by Ashlyn Frost

Dr. Jacob Giswold is your friendly neighborhood mad scientist and I am his Frankenstein. My name is Remy Halbright and I have a favor to repay.

DNA Academy is an illegal part-laboratory-part-school in the woods. Giswold and his business partner have demanded I attend. There, they will turn teenage hopefuls into inhuman masterpieces through genetic alignment treatments. The catch? They need the unique compounds in my blood to do it. Dr. Giswold's treatments worked on me, but they seem to be hurting my new friends more than they are helping them.  I'm starting to feel like I'm more of a prisoner than I am a student. I could try to escape, but I know somewhere, hidden in these woods, are secrets about my past. Will the handsome guard with cerulean eyes help me investigate or am I on my own? What dark secrets fester in these halls?

One thing is clear: in a place where everyone's very DNA is changing, no one is who they seem, not even me.

The Watchers don't know I'm watching them. It's a delicious feeling being the predator when they think I'm the prey. One day, if they ever cross the line, I'll cross it too.

Silvery blond hair escapes from my hood in wild tresses as I run fast enough to make an Olympic medallist look sluggish. San Francisco is sheathed in dense fog. It weaves through the skyscrapers and makes it difficult to see. The Watchers wear thick, wool trench coats over their suits. They stand on street corners and linger in parked SUVs.

My body radiates warmth as I climb a fire escape to the second floor and leap onto a nearby rooftop. I'm light on my feet, shifting my weight effortlessly as I creep across the thick clay shingles, slick with precipitation. When I reach the other side of the building, I jump to the sidewalk, rolling to absorb the impact like I'm in a parkour video.

The city is remarkably quiet, but in the stillness, my enhanced senses come alive. I hear the soft-footed steps of vagrants and criminals as they wander the streets. I feel the subtle vibration as the bouncer at the bar four blocks down lowers the thick metal grating over the door. I breathe in salt from the ocean as it churns miles away.

The buildings around me begin to blur as I pick up my pace. My routine remains the same: take the surface streets and stick to the shadows. Here, in the murky dark, I flirt with my potential.

The Watchers are scrambling to find me. They lost visual on me when I jumped onto the roof. Occasionally, I hear their voices buzz through their radios as they search for me. A smile spreads across my lips which part and let in the night air.

My adoptive parents warned me about how dangerous the Watchers are, but they worry too much. If the Watchers try to take me away, I'll use them as combat practice. Every muscle in my body itches for a fight, but I enjoy the chase even more, so I bait them for sport.

The Watchers find me again on Van Ness Avenue. Their postures are slumped, and they walk with a loose gait. To anyone else, they look like businessmen that took happy hour too far and forgot where they parked. They get held up by a shaggy man with a gun, but I know they can take care of themselves, so I keep running.

Moonlight caresses a shiny black SUV sitting vacant near a construction site. I skid on the heels of my tennis shoes and stop beside it. The familiar gold logo with a letter B surrounded by ivy subtly marks the rear window of the vehicle. I've never interacted with the Watchers or their belongings directly, but I'm growing bolder by the day.

If they're looking to catch people like me and take us away, I'll be less likely to meet another gifted person. It's all I want, to not feel so alone in the world.

Silently, I crouch and get my hands underneath the car. The plastic wheel well and metal frame crumple in my bare hands as I heave the vehicle into the air and onto its side. Before it hits the ground with an alarming screech, I'm already down the block. Laughter bubbles inside me as I listen to the Watchers rush to the SUV and blame each other for leaving it unattended. The man with the gun is long gone, and the blood on the tallest Watcher's knuckles tells me they all still have their wallets.

Most of the Watchers are focused on getting the SUV towed before the police get involved. One of them is looking around for security cameras to disarm while another makes eye contact with me, or at least I think he does. It must be hard to see me, dressed in black, tucked into the shadow of a closed restaurant.

I start backing up slowly. He advances but doesn't call for backup. Nice. A lone Watcher will make for an easy fight.

Once he's close, I snake around a back alley and out onto Market Street. He won't lose me here. I pull my hood back and shake out my shoulder-length hair. Venomous snakes wear bright colors as a beacon, a fair warning. This is mine.

A group of drunk men in green and white jerseys smile at me as they make their way to the subway entrance. The last train left hours ago. They must see the Watcher following me because one of them stops and points to the Watcher.

"Hey, he giving you trouble?" The question is directed at me, though his eyes never leave the Watcher. His words are slurred, but there's an unmistakable edge to them.

"No," I answer softly, smiling. "We're just playing a game." As far as I'm concerned, it's the truth, and I'm not about to let them hijack my target.

"I got a daughter her age. If you give her any trouble, I'll give you some," the sports fan says. The Watcher steps into the light.

My breath catches. He's not at all what I expected. I've never seen a Watcher up close before, but I thought they'd be older and as interesting as reheated broccoli. He's about my age and his eyes are the color of pool water on a summer day. His hair is black or close to black, it's hard to tell in the streetlights.

"She's my friend. Her name is Remy. I'm walking her home," The Watcher says, his voice smooth and even. He knows my name, which sends shivers down my spine. Guess I'm not as anonymous as I thought. As he puts his arm casually across my shoulders, I'm enveloped in the scent of moody cologne—sandalwood, pine and something dark and sweet.

"Then why were you twenty feet behind her?" One of the other men in jerseys asks. Their eyes squint in suspicion. I loosen my shoulders and lean into the Watcher's side.

"It's fine. He's just walking me home," I corroborate.

As soon as they're out of sight, my hand shoots up to grab the Watcher's wrist, still resting on my shoulder. I twirl him around and twist his arm at an unnatural angle behind his back in one swift, cruel movement. He gasps but doesn't yell. Impressive.

"Do you think you can take me down alone? You're a fool," I whisper over his shoulder. With my nose just inches from his body, I drink in the scent of pine again.

"It's almost time," he says, looking over his shoulder, straining to face me, even though it must make the pain in his shoulder unbearable. He breathes hard and swears under his breath but doesn't try to break away. His eyes burn like blue fire and bore into mine.

"Almost time for what?"

"Agent Marsik, do you copy?" His radio crackles to life, and he tilts his head, raising an eyebrow, asking for release. I hesitate for a moment, then my fingers slip away from the warmth of his wrist.

"Yeah, I got turned around. I'm coming." He releases the talk button.

"You're not going to tell them you caught me?"

"I'd rather not. Besides, you were the one who caught me."

"True. Are you going to tell me what's coming or not?" I fold my arms across my chest.

"Not. I've already said too much. Just be ready for anything, okay?"

"What's the punishment for talking to people like me?" When I ask this, his eyes widen and his brow furrows.

His radio comes on again, but I don't hear anything specific. I'm not paying attention. I'm the only one.

Angry tears flood my eyes as I shove the Watcher away. He's lying. He has to be. I can't be the only one.

As I run home, the implications of what he's said hit me like aftershocks of an earthquake. If I'm the only one, where did I come from? Plus, that would mean the Watchers aren't scouts looking for gifted people. They're only looking for me.

I'm careful to check for anyone following me. I think I'm clear, but I can't be sure as tears still blur my vision. I wipe them away angrily, keep diverting and take the long way home. When I get to my house, I scale the trim, wedge my foot into the dip in the siding, and sneak back in through my window.

The sun begins to creep over the hills as my mind reels. It's almost time. What did the Watcher mean? My eighteenth birthday is in two days. If I really am the only one, does it have something to do with that?

Something rustles against the fabric of my hoodie as I pull it over my head, catching a lingering whiff of sandalwood. My fingers slip inside the pouch and close around a piece of paper. I never keep anything in there. My mind flashes back to the Watcher with cerulean eyes. He must have slipped it in when we were in close quarters.