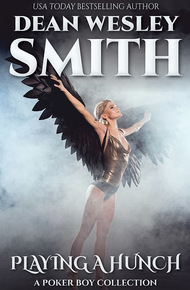 Poker Boy works as a superhero for Stan, the God of Poker.

Poker Boy's unique talents—a keen sense for danger and a remarkable ability to read people—allow him to help those in need. He also asks a lot of stupid questions.

But sometimes stupid questions lead to the only answer that will save the day.

In this collection, Poker Boy tackles some tasks that would stump any ordinary superhero.

He helps rescue another superhero from himself; helps a poker player learn that most important of skills—patience; discovers what's behind the bad poker playing of the Idiot Boy; travels to the Library of Atlantis to get the answer to a stupid question that demands an answer; and tempts fate by asking where the gods came from in the first place.

No ordinary superhero, Poker Boy saves the world one humorous story at a time.

The superhero Poker Boy came into existence late one night in a poker tournament when a guy bet wild on a bad hand, lost (as the odds said he would) and then, when standing up, said, "The poker gods weren't with me tonight."

My first thought was, "No god would help you win with that bone-headed of a play."

Then I realized that just maybe there was a god of poker.

And if there was a god of poker, there would be gods of everything else on the planet. And since these gods couldn't be everywhere at once, they had to have superheroes working for them.

A few years earlier, I had a friend who was a writer in the then just blooming world of tournament poker. He liked to call himself Poker Boy, but he had died suddenly. So, as I was sitting there between hands in that late-night tournament, I knew that the superhero working for the god of poker would have to be called Poker Boy.

And the god of poker was named Stan.

Poker Boy had to have a girlfriend, who was a superhero in the area of hotel hospitality called Front Desk Girl.

And off I went.

I took what I considered the superpowers of regular professional poker players and ramped them up. Poker Boy could read anyone, he had a sense when something was going wrong. He was frighteningly good at hiding, and with math, but not the smartest when it came to real world things.

He loved people, liked to help people, and was so new in the superhero world, he was constantly asking questions. Often really stupid questions.

And with those questions and the team around him, he had managed to save the world numbers of times, including saving Lady Luck herself, the woman in charge of everything.

With each adventure, he learned and gained even more superpowers and a nifty office as well. And his team became known as the top team in superhero world, even though he really wasn't in charge.

There are five stories included in this book. Five Poker Boy recent adventures, including the story "Gods Have a History" where Poker Boy asks a logical question and discovers where all the ancient gods came from. And why.

And by the way, Poker Boy's world is so large, I have written many other stories about characters in his world. And sometimes he makes a guest appearance.

So, if interested, check out the Ghost of a Chance stories and novels, the Marble Grant stories, Sky Tate mysteries, and the Pahket Jones cat stories.

All of them started that night at a poker table.

The five stories in this volume have never been collected before, so I hope you enjoy the crazy world of Poker Boy as much as I do.