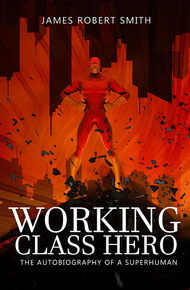 James Robert Smith was surrounded by comics as a kid. His dad owned several bookstores that sold used and rare books. So, from the 1960s onward he had access to his father's warehouse of comics filled with over 250,000 back issue Silver Age and Golden Age comic books.

Influenced by the works of Jack Kirby and Steve Ditko and their creation, the Marvel Universe, WORKING CLASS HERO: The Autobiography of a Superhuman is the novel that Smith has been itching to write for decades.

Smith's latest novels are THE EMISSARY and WORKING CLASS HERO. His short story collection A CONFEDERACY OF HORRORS appeared from Hippocampus Press in 2015. Among his other novels have been DEADLOCKED, THE COALITION, THE NEW ECOLOGY OF DEATH, FOUR FROM MANGROVE, and others. He has written comic scripts for publishers as diverse as Marvel Comics, Kitchen Sink, New Comics, Basement Comics, and others. His short fiction (well over 80 sales the last time he bothered to count) has appeared in dozens of markets from Fear Magazine, Weird Tales, Deathrealm, and others; to various anthologies in both hardback and paperback. He optioned his first novel, THE FLOCK (from Tor Books), to Warner Brothers.

Mr. Smith recently retired from his day job as a laborer for the United States Postal Service and he lives with his wife in North Carolina. When he's not at home writing he can generally be found hiking, backpacking, kayaking, or camping in various mountain areas in either the eastern Appalachians or the western Rocky Mountains. He's an accomplished amateur photographer with landscapes and wildlife as his primary subjects.

His next novel will be BILLY B VERSUS THE TROUBLE BOYS, his second novel in the Working Class Hero series.

When people exhibit superhuman abilities after being afflicted with a new condition called Adult Onset Hyper-Development Disorder (AOHD), Uncle Sam steps in to take control of them. You either become a Fed, or an enemy of the state. Upon contracting the disorder, Mike Evans finds himself given the code name of Billy B, and tagged with the label of a Level Seven superhuman. They don't get much tougher or more powerful in the world of "Odds", as the public begins to refer to them.

With such power, Mike is given leadership of a team of other Odds and they are based in the city of Charlotte, North Carolina to act as defenders of their part of the east coast against all threats super-powered. He and his teammates Gila, Shylock Holmes, Amber Ember, and Constrictor do well at their jobs until exactly twelve people claiming to be the gods of Olympus appear. Can they handle this dozen come back to claim Earth after 2,000 years? Or have they met their match?

Find out in WORKING CLASS HERO: The Autobiography of a Superhuman. First in a series!

The public call us "Odds". I used to call people like me the same thing, until I became one.They say I'm a Level Seven.

I don't like to brag, but according to the Agency that's big-time stuff. It's why I got Charlotte, but they tell me that I could handle some place like Boston, or DC.

Still, I stick with Charlotte. Because you can get edged out of an urban area pretty quick when you're a hyper.

Of course, in the parlance of the politically correct, these days, I'm someone who suffers from AOHD: Adult Onset Hyper-Development Disorder. Some doctors think it's a kind of virus they haven't isolated. And others think we're all mutants whose condition doesn't kick in until later in life. And then there's the conspiracy nuts who think we're all either lizard aliens or the results of some government genetics program. Me, I just want to shake the hand of the physician who came up with that four-letter term. It gives all of us who suffer from the condition an out. Either we go in the right direction and they hire us and give us gainful employment as an operative of one type or another, or you get a nice anagram that your lawyer can use to excuse the crimes you commit if you swing the other direction. Either way, those four letters come in handy.

And this is how it happens: One day you're walking around just a normal guy, and then the next you feel like an allergy has you, or the flu, and a few hours later you're bench-pressing Mack trucks, or punching holes through the sky as you fly at Mach One, or shooting 100,000 volts of electricity out of your fingers.

Or, Hell. Maybe you're a Level Nine and can do all of that shit. They say they haven't seen a Level Ten, yet. And that's probably a good thing.

Like I said, I'm a Level Seven and that makes me a bad-ass and so, after all appropriate training and instructions pertaining to protocols and government dictates, they handed Charlotte, North Carolina to me and told me to go on patrol. My job is to keep the place free of the bad supers who might show up to take advantage of the local normals. Because when some people suddenly find that they can walk through concrete walls or melt steel with their laser-beam eyes, they decide to try for the easy money or go on a revenge kick. The bad ones seem to always outnumber the people like me. I'm a good guy.

Well, that's what the official press says, anyway. Actually I'm a regular Joe at heart and it's all just a job to me. I grew up poor and I used to work on a loading dock before the Hyper Disease hit me and…well…I'm still basically carrying the load for the Man. I just get to wear a crazy-ass getup when I clock in every day and have a working name that's kind of funny when you think about it, but nobody really laughs at a guy who can drop-kick your butt over the Duke Power building in city center.

That's why they call me Billy B., the "B" being short for bad-ass, of course.