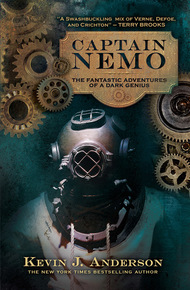 Captain Nemo - The Fantastic Adventures of a Dark Genius by Kevin J. Anderson

The life story of Jules Verne's enigmatic dark hero from 20,000 Leagues Under the Sea and The Mysterious Island.

He built the Nautilus submarine, which terrorized the sea in his war against all war.

He discovered a passage to the center of the Earth.

He explored Africa in a balloon.

He fought pirates on the high seas …

And he was a friend of Jules Verne.

In this epic fantastic history, Andre Nemo experiences incredible adventures, which Verne then incorporates into his classic novels. Learn the truth of these extraordinary journeys, which is even more incredible than fiction.

Verne had composed many of his best stories in this isolated tower room, where narrow latticed windows looked out upon the leaden Amiens sky. The bleak view reminded him of the polar wastelands in Captain Hatteras, or the Icelandic volcano in A Journey to the Centre of the Earth. Imagination had taken him to many places, both real and unreal.

Elms graced the flagstoned courtyard of the author's house on rue Charles-Dubois. Thick vines climbed the brick walls like ratlines on a sailing ship, such as the three-masted Coralie, on which a young and ambitious Jules had almost taken a voyage around the world.

Almost. At the last minute, Verne's stern father had snatched him from that real-life adventure, then punished him for "boyhood foolishness." His friend André Nemo had gone on the voyage without him. "A world of adventure is waiting for us," Nemo always said. But he had done it all alone.

Though he was much older now, and wealthy, Verne promised himself he would go out and see exotic lands and have exciting adventures, just like Nemo. One day.

At the age of 45, Jules Verne was a world-renowned writer, bursting with imaginative ideas. Persistent gray strands streaked his unruly reddish hair, and his long beard lent him a philosophical appearance. Often depicted in the French press, Verne had seen his fame grow with each successive novel. Lionized for his brilliant imagination, he was a man to whom the world turned for excitement.

And I deserve none of it.

His "inventiveness" was a sham. Nemo was the one who experienced all the real adventures, survived the trials, explored the unknown. Verne was merely an armchair adventurer, living a vicarious life through Nemo's exploits.

No matter. Nemo didn't want the applause or the fame anyway.

In the tower study, Verne's maplewood shelves groaned with reference books, atlases, explorers' journals, newspaper clippings — information compiled by others. He had no other way to achieve verisimilitude in his fiction. Verne had been everywhere on the planet, but only in his mind. It was safer that way, after all, and not so much of a bother.

Verne picked at the plate of strong camembert his quiet and frumpy wife had left him hours before. He smeared the soft cheese on a piece of brown bread and ate, chewing slowly, deep in thought.

Nemo had once said to him, "There are two types of men in this world, Jules — those who do things, and those who wish they did."

Oh, how Verne envied him . . . at least in a rhetorical way.

Ten years ago his first novel, Five Weeks in a Balloon, about a fantastic trip across unexplored Africa, had established him as a popular writer. Since then, his "Extraordinary Voyages" had made him a fortune.

Despite the fame, Verne found himself oddly jealous of his old friend Nemo, the experiences he'd had, the opportunities he'd seized. Nemo had loved and lost, had come close to death any number of times, had suffered tremendous hardships, and triumphed. It seemed like such an exciting life, if one went in for that sort of thing. Nervous perspiration broke out on Verne's forehead just to think of it. What is it about the man?

Verne had followed Five Weeks with A Journey to the Centre of the Earth, which explored exotic regions underground, and then Captain Hatteras about a dramatic quest for the North Pole. Next came From the Earth to the Moon, The Children of Captain Grant, and 20,000 Leagues Under the Sea, all before the Franco-Prussian War had devastated the French countryside.

Ignoring the gray sleet and the skeletal elm branches outside his window, Verne added another length of wood to the fire. He closed the shutters, increasing the gloom in the study.

Downstairs, the family's big black dog barked, and his ten-year-old son Michel squealed. The rambunctious boy had an impish face, chestnut hair, and the soul of a demon. The dog barked again, and Michel shouted, chasing it around the house. Outside, when the regular train from Amiens to Paris clattered by, the engineer took malicious delight in tooting its whistle.

The clamor and disruption was enough to drive a man mad. Adventures enough for me, he thought.

The latest novel, Around the World in 80 Days, had taken him beyond success into genuine celebrity. Installments published in newspapers generated more excitement than actual news. Chapters were telegraphed around the globe; men made wagers as to whether the intrepid Phileas Fogg would succeed in his quest to circumnavigate the globe. Already, Verne had begun talks with a well-known playwright to create a stage production with real cannons and a live elephant. Very exciting.

Yet another idea he owed to Nemo's real-life exploits.

What is it about the man?

The popular favorite by far, however, remained the undersea adventure of the Nautilus and its enigmatic captain who had isolated himself from humanity, a man who had declared war on War itself. To Verne's surprise, the dark and mysterious villain had captured the public's imagination. Nemo, Nemo, Nemo! No one guessed the man was based on a real person.

Verne thought he'd ended Nemo's story by sinking the sub-marine boat in a maelstrom off Norway. His fictional version of Captain Nemo had perished in that vortex of waves, while the erstwhile Professor Aronnax, his manservant Conseil, and the harpooner Ned Land barely escaped with their lives.

Verne hadn't really believed Nemo would stay down, though — not even after his literary death.

He pushed the tea and cheese away, then stared down at the thick ledger book in which he wrote his manuscript. This massive new novel would be a challenge to his heart as well as to his storytelling abilities.

Verne had never intended to write about his friend again. He had begun this new novel, a shipwreck story, back in 1870 during the horrors of the Prussian war. Buildings had burned; desperate citizens had eaten zoo animals and sewer rats just to stay alive; and in the midst of that turmoil Verne had lost his beloved Caroline forever.

But now, two years later, the world had returned to order. The trains ran on schedule, and once more Verne was expected to release his "Extraordinary Voyages" like clockwork.

He hated to reopen old wounds, but he would force himself to tell the rest of Nemo's story. He knew the real André Nemo better than any man alive, the passions that drove him, the ordeals he faced. Future generations would remember Nemo's life the way Verne chose to portray it, rather than what had actually happened. He would concoct a fitting background for the dark captain. The "truth" posed no undue restrictions — Monsieur Verne was a fiction writer, after all.

He opened a fresh inkwell and dipped the sharp nib of his pen, then scratched the blackened tip across the paper. Beginning a new story, a long story: The Mysterious Island.

Perhaps he could finally lay Captain Nemo to rest and then live his own life, seek out his own adventures. One of these days. . .

What is it about the man?

The words began to flow, as they always did.