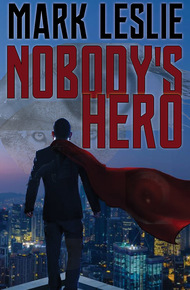 Mark grew up on a steady diet of Spider-Man comic books and counts Stan Lee among the writers whose imagination most inspired him. He is a self-confessed book nerd who has been writing since he was thirteen and discovered his mother's Underwood typewriter collecting dust in a closet. His first short story appeared in print in 1992, the same year he started working in the book industry. He has published more than twenty books that include thrillers and fiction (I, Death, Evasion, A Canadian Werewolf in New York), paranormal non-fiction (Haunted Hospitals, Tomes of Terror, Macabre Montreal) and anthologies (Campus Chills, Feel the Fear, Superstitious).

Mark lives in Waterloo, Ontario and can be found at www.markleslie.ca, wandering awestruck through bookstores, investigation craft breweries and finding lame excuses to put on his Spider-Man costume.

WHO ARE THE SUPER HEROES?

When we think about superheroes, our minds often race to images of someone who takes off their "mild-manner" style glasses, then dons on a mask and costume in order to rush the rescue and save the day.

We also think about evil fiendish villains in secret lairs, madly plotting the destruction of the world; and our only hope is a band of super-powered crusaders banding together to avenge the pursuit of liberty, truth, justice and the American way.

But not all evil in the world comes from the mind of evil genius master planners.

And what makes the heroes who face that evil super?

Any of those things can make a hero.

But perhaps what makes them super is the way they each respond to the things that can be tough for anyone, no matter what their strengths, or weaknesses, to face.

And face them, they will, even if some of them might be considered nobody's hero.

SOME ARE BORN TO SAVE THE WORLD

Bryan tried to take in a deep breath, but he might as well have been sucking a mouthful of crackers into his lungs for all the good it did. The breath of air was devoid of the vital oxygen his body needed.

He was out of oxygen and, sadly, almost out of time.

But he had gotten out of life and death struggles before.

White Vector was, after all, the people's hero who had always found a way.

This is no different than that day on the bridge, he thought.

It was a stifling hot summer day when he had first donned the white skin-tight costume with the crimson shorts and the vector-based, round four-color swirl on his chest, the red leather boots and the red hooded mask.

After several years of carefully planning out his costume, his name, and exactly how he could put them to use, he was about to step out into public prepared to change into his alter ego: White Vector.

That July afternoon, wearing the outfit under his street clothes, the hood tucked into his knapsack, was a day he had ultimately been needed.

He didn't have the ability to fly like Superman, nor to scale walls or swing from building to building like Spider-Man, nor even to race through the city streets in a super slick Batmobile like Batman, so public transit was the quickest way to get about the city. He got around by bus, subway, or train.

He had been riding the Q60 bus from Queens to Manhattan when a transport truck blew a tire and drove a station wagon up against the guard rails with such force that it crashed through, the back half of the car dangling precariously over the edge.

After taking a quick visual survey to ensure his passengers were physically unharmed after the sudden stop, the bus driver opened the doors and ran toward the station wagon.

Bryan took that moment to slip outside, pulling his backpack off while ducking below the bus windows and behind the steel wall of the transport truck. There, he pulled the hooded mask over his head and then quickly removed his shirt and pants and stuffed them into his knapsack before tossing it under the transport.

He wondered if he'd ever get those street clothes back: it never seemed to be an issue where Peter Parker or Clark Kent stashed their civvies.

In his mostly white and red costume, Bryan — now transformed into White Vector — walked back around the front of the bus and watched the bus driver finish pulling the male driver and female passenger out of the station wagon.

The driver had a bleeding gash on his forehead and was stumbling away from the car, looking dazed. The passenger, who seemed uninjured, was turning back to the car as if she wanted to climb back in, but the bus driver held her by the arm.

The car, though, was teetering, slowly rocking, looking as if any sort of extra weight on it would send it plummeting down into the river.

"Don't worry, ma'am!" Bryan said, stepping between the woman and the car. "I'm White Vector. And I'm here to help. What's his name?"

"Stand back, please! It's going to be okay." Bryan said, then turned toward the car. "It's okay, Bobby! I've got you. You'll be safe."

The front of the car was pitched up almost two feet in the air in its teeter, and Bryan grabbed onto the steel bumper and let the power that flowed through the blood in his veins become an extremely focused concentration of strength into his arms and upper body. He also siphoned slivers of strength from those nearby. Each power siphon didn't last more than a minute or two, but it was often enough for him to perform some superhuman activity.

He pulled at the car's bumper, and the entire vehicle began to slowly slide back onto the bridge, one inch, then two.

With a wail of scraping metal, the bumper Bryan was holding was no longer attached to the front of the car. The vehicle slid back quickly, farther back than it had been sitting before.

The car was now dangling at a nearly ninety-degree angle to the bridge, and, inside, Bobby was wailing even louder for his mommy.

"Do something!" Bobby's mother screamed.

Bryan shuffled over to the side nearest the open door, dropped down onto the pavement, and peered through the triangle of space between the car, the door, and the edge of the bridge. He couldn't climb into the car because the extra weight would send it toppling down. But he wondered if he might be able to lie on the bridge, stretch his upper body inside the car, and grab the child and pull him to safety.

Inching his way forward, he finally got to a point where he could lean most of his upper body into the car without putting any of his weight on the vehicle. He reached down past the back of the driver's seat toward the car seat. The only sounds, besides the wind, were Bobby's cries and the gentle creaking of the car as it continued to shift and rock.

With his arm fully extended, he was still a good three inches away from reaching the buckle. The child, who looked to be less than two years old, was crying harder and louder than before.

But my mind can.

Bryan took a deep breath, concentrated on the unseen energy flowing through his body, on the anxious energy pumping out of Bobby's mother, the bus driver, and even the nearby passengers from the bus. He could feel their life force and drew strings of it into his mind, wrapping it into a tight ball.

Then, with a focus that completely blocked everything else out, Bryan propelled the ball forward in a pencil thin compacted blast of air.

The force was enough to depress the buckle.

The straps on either side of the buckle released.

Bryan's head immediately filled with a lightning burst of white-hot pain, and it took everything in him not to yell out or move his body in any way that would touch the vehicle.

Bryan drew in more energy and channeled it down through his extended arm. He could feel the mystical power throbbing through his arm, and he pushed out an energy field that wrapped around the toddler's body.

When he felt the child securely within his grasp, his mind pulled back and up, and the toddler levitated forward up and out of the car seat toward Bryan as if by unseen hands.

The pressure in his head grew to a pounding series of quakes,

and he could feel the blood vessels in his nose bursting.

Blood trickled down his chin and splashed onto the toddler's face as he telekinetically pulled Bobby up close enough to grab a handful of the toddler's shirt and finish pulling him the rest of the way up. Wailing, Bobby grabbed at Bryan's forearm and held on as he was slowly lifted up.

Bobby's shoulders cleared the window, the toddler kicked out and hit the steering wheel with his knee.

The car teetered at a much sharper angle.

Bryan pulled the child in and as close to his chest as he could, shielding the boy's body while the car pitched forward, finally breaking free of the tentative hold the bridge and railing had on it and plummeting into the cold waters more than a hundred feet below.

Bryan felt his energy leaving him, a side-effect he recognized that came immediately after he drew in and expended such a burst of energy. He could just manage to roll onto his back to present the screaming toddler to his mother.

Not a bad first public use of his powers.