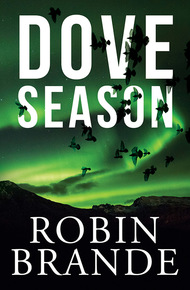 Her young adult novels have won numerous state and library awards and have been named Best Fiction for Young Adults by the American Library Association. She was the Judy Goddard/Libraries Ltd. 2013 Arizona Young Adult Author of the year. Her debut novel Evolution, Me & Other Freaks of Nature was included on the prestigious Amelia Bloomer List of the ALA Feminist Task Force and received a citation from the Notable Children's Trade Books in the Field of Social Studies from the National Council of Social Studies/Children's Book Council.

She is the author of twenty-five books including the fantasy series Bradamante Saga, the science fiction series Parallelogram, and the popular young adult novel Fat Cat.

Her new series Dove Season draws upon her training as a martial artist, as well as the real-life X-Files compiled by scientists (including her father) in the 1960s and 70s.

A POWER SHE DOESN'T WANT.

BUT EVERYONE ELSE DOES.

Marnie Stemple has a secret. One she's been able to hide from the world for years. But now she's been exposed. And her worst fears are coming true.

What does the government want from her? To use her as a spy? A weapon? A warrior? She's not made for any of those.

But Marnie can't resist the forces who are after her, any more than she can resist using her power.

Alice Kern has a secret of her own. She's using her position as an analyst with the Agency to find out why her parents were murdered six years ago. But now her investigation has put a target on her own back. How can she defend herself when she doesn't know who is trying to kill her?

But Alice has hidden skills, too. And if she and Marnie can find some way of joining forces, they might both find a way to survive.

Unless somebody else gets to them first.

I can only work places that allow a smoke break. I don't smoke. My problem is different from that. My problem looks magical to other people, but it's a compulsion, something I can't resist, the way some people need coffee at the exact same times every day, or a sugar fix, or drugs, I suppose, although that's taking it further than I like.

Specifically: I walk quickly for a few steps, then I bound forward a few steps more, and then I leap and I flap my arms (I am not joking) and by now I'm airborne and I can hover there, but I prefer to swim. I like doing butterfly. I arc both arms at the same time, wide big arms, feels beautiful and graceful and strong to do it that way, and I kick my feet together behind me in the dolphin kick I learned on swim team when I was little (before I could fly), and my body sort of undulates, although that sounds awful when I say it that way, but it's that kind of writhing forward thing a snail does, front end forward, big arm stroke, head dips down, butt comes up, here's the dolphin kick. I can cover acres of ground like that. I once air-swam from one end of a three-mile park to another all during my ten-minute smoke break.

I know, it sounds awesome. You wish you were me. I get it.

I used to have flying dreams. We all have, right? Where you're being chased by the bad guys and suddenly you realize if you run just a little faster and flap your arms, oh my gawd, you're lifting up, you're just out of their reach, you've escaped, you're safe, and now you might as well keep flying and seeing what that's like before you wake up—

Except all of that happened to me and I didn't wake up. Turns out this was my life now.

All fine, all good, except for the compulsion part. Remember I said about that? Because it turns out something like this isn't really as voluntary as you'd think. You can do it whenever you want, sure, but you also have to do it. If you don't, you feel sick and edgy and jittery and weak. You feel nauseous. You feel like you're going to jump out of your skin if you can't break away right now and do your walking-running-flying bit, and as soon as you do, as soon as you're airborne again, it's like all the jittery, frayed endings of your nerves have been knit back together and fixed. It is a fix. I admit it. And I need it every single hour.

Because my hour was long past—long past. Did they not get that? Did they want to see what would happen? Of course they did. Tricky government men—

I told them as little as possible, but I know I said too much. As the time ticked by I was becoming more desperate, and you say things. They count on that.

But then the door opened, someone new coming in, and quick as a lark I was up and out of my chair, out the door, running, running, desperate for open air.

"Miss Stemple? Marnie?" He was running after me, the shorter, younger one with the tight blue shirt, sweat stains in his pits, crooked front teeth but good thick brown hair, not a bad face overall, but still. Effen government men. They'd had me in there for over three—THREE—hours, studying me, questioning me, thinking they were convincing me ("Service to your country … make a huge difference … fulfill your purpose. Don't you want to fulfill your purpose, Miss Stemple?")

F you, I made a mistake, that short-necked guy from accounts payable with the Hitler-looking comb-over saw me, friggin saw me, and if he thinks this is serving his country by calling the feds and telling them he saw a flier, some woman right there from his own office, then F you all, and THREE HOURS, my heart was racing, cold clammy sweat was pouring down my face, my heart was going 500, my eyes were already scanning out the windows for where I could go, someplace tall where I could fly, but there was nothing, no place, not even a few trees on the medians, and still I ran full out…