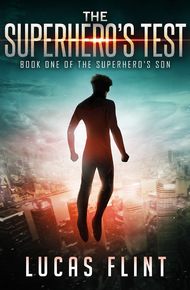 Lucas Flint writes superhero fiction. He is the author of The Superhero's Son, Minimum Wage Sidekick, The Legacy Superhero, Dimension Heroes, and Capes Online, among others.

Find links to all of his books, social media, updates on newest releases, and more by going to his website at www.lucasflint.com.

The Superhero's Test by Lucas Flint

Seventeen-year-old Kevin Jason starts his first day at his new school by unintentionally punching the local bully through the cafeteria wall. When Kevin's father, a legendary superhero, learns of this, he insists on training Kevin to master his new powers, though Kevin finds his father's training methods a lot less exciting than he thought they were going to be.

But Kevin's training takes on new urgency when the local bully's father—Master Chaos, one of the world's most dangerous supervillains—breaks out of prison and declares Kevin his new archenemy for harming his son.

"Yes," said Robert. "If you do that, I might be able to overlook such stupid behavior from a kid as green as yourself."

I raised an eyebrow. "A kid? We're probably the same age."

I didn't think he did, but I decided not to say anything that could escalate the situation, although that was hard because my temper was starting to rise. Mom always told me that I should control my temper, but it was always hard to do whenever I was talking with a bully like Robert.

Still, I managed to say, in a calm voice, "What will happen if I say no?"

"Then I'll just beat you up and take your lunch," said Robert. "Every day for the next week, I'll give you a progressively worse beating and then take your lunch."

"What the hell?" I said. I stopped myself quickly, taking a few deep breaths to control my temper, and then said more calmly, "What? That's not a fair choice. Either way, you get my lunch every day for the next week."

Robert smiled, a psychotic smile that I wanted to wipe off his face. "And? Why should I care? You're the new kid around here. That means you don't get a choice about what we choose to put you through."

My hands balled into fists, but I shoved them into my hoodie. But that did nothing to cool the anger boiling within me.

I looked at Malcolm and Tara. "Guys, is he for real? Tell me this is some kind of elaborate prank."

Unfortunately, Malcolm and Tara seemed to be trying to turn invisible, because Malcolm was looking at his food as if it was the most interesting thing in the world, while Tara had brought her smartphone even closer to her face. I would have considered this a betrayal, but neither of them were really my friends, so maybe I should have seen that coming.

My hands shook. I was starting to fantasize about knocking Robert out in one blow, but I kept myself from doing something I'd regret.

But neither was I going to stand here and take it. So I said, "Sorry, Robert, but looks like you're going to have to get your own lunch this—"

I didn't even see it coming. Robert's fist smashed into my abdomen, knocking the air out of me. I gasped in pain and fell down onto my seat at the table, causing Malcolm and even Tara to look at me in surprise.

Wrapping my hands over my stomach, I looked up at Robert, who was now holding his fist up like he was going to mash my head in.

"You just had to make things difficult, didn't you, new kid?" said Robert. He snorted. "Oh, well. It's been a while since I've gotten to beat a new kid. Most new kids don't have the balls to say no to me."

Damn, Robert hit hard. He really was as strong as he looked. Yet I didn't let the pain make me cower. Instead, it made me angrier than ever. My anger rose within me like a geyser and I was just about ready to blow.

Robert swung another fist at me, this time aiming for my head, but I caught his fist with my hand. I expected it to be hard to hold back, but to my surprise, I held back Robert's fist with ease.

"What?" said Robert. He sounded genuinely shocked, like he was incapable of understanding what was happening. "How did you do that?"

I wasn't sure how, because I had never done that before. But I didn't question it. I just stood up, forcing Robert's fist back as I did so. Anger continued to flow through my veins and I wasn't going to be calm anymore.

Robert seemed to get over his shock, because he pulled back his other fist and threw it at me. But I dodged it easily and responded with a punch of my own, aiming for his chest, which was unprotected and a big target.

When my fist collided with Robert's chest, Robert literally went flying. He flew backwards through the air, across the entire length of the cafeteria, screaming loudly and drawing the attention of everyone in the cafeteria. Hundreds of pairs of eyes followed Robert as he flew, until he smashed straight through the cafeteria wall and stopped screaming.

I stood there, blinking in disbelief. I looked down at my own fist, which looked no worse the wear for having punched a big guy like Robert all the way across the cafeteria. The only thing I noticed was how strong I felt, but I was too shocked to pay attention even to that.

Then I looked at Malcolm and Tara. Malcolm was staring at me like I had grown a set of wings and flew away, while Tara had actually dropped her smartphone onto the table and stared at me with the same shock as Malcolm.

That was when I felt people looking at me and looked back at the rest of the cafeteria. Everyone in the cafeteria was looking directly at me, wearing expressions as the ones Malcolm and Tara wore. I probably looked the same, but I didn't have a mirror so I couldn't see my face.

All I knew was that I had done something I had possibly just murdered another kid … and I hadn't even known I could do it.