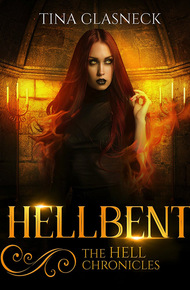 TINA GLASNECK is a USA Today bestselling author. She enjoys creating fantastical tales starring Norse gods, like Loki, Thor, Odin and Freyja, dragons, and magic. When she is not researching mythological creatures, legends and folklore, she can be found discussing time travel, alternate history, and the epicness of all things dragons. One day she hopes to travel to Asgard and see what all the fuss is about.

When the gods get upset, Lady Hel has a way of breaking loose!What happens when she shows up?

Sif is a struggling college student caught in-between the gods for an epic battle. All is well until both Lady Hel, the goddess of death, and Thor show up to pay her a visit.

Lady Hel has not been restored to her kingdom, as promised. Instead she is still exiled on Earth. With time on her hands, she's stuck on the idea of family, and her discarded kin, when inspiration hits. She doesn't need to wait for Ragnarok to come for the gods to receive their comeuppance. No, there is no time like the present to hit them where it hurts - their champion Thor.

When the gods get upset, Lady Hel has a way of breaking loose!

Thor's in trouble with Odin, the All-Father, for disobeying his orders -close to treason. And, he's also found his way to Midgard just in time.

All roads lead to Sif, and she'll have to choose sides, heart or honor, carefully, or mankind will pay the ultimate price. Broken promises spark enmity.

And when stuck between two gods, how's a woman to choose?Hell hath no fury like a goddess scorned.

What happens when the gods come to Earth? Sif is about to find out...

"Why are we doing this again?" Emili asked me in a loud yawn.

I clenched the steering wheel, parked the car, and noticed the crowd of onlookers forming at the edge of the tree lined field.

"Seems like it brought out the crazies," Emili continued.

"You know you're also talking about us, right?" Chi pointed to the crowd, and then at us all crammed into the small sedan.

"Because, who doesn't want to see the asteroid? Don't you know about the treasure—?" Kristian interjected.

No matter how I tried, I couldn't see anything from my vantage point.

Ola, in the back seat, handed me her phone and I glanced down at the image. The picture showed two men in white contamination suits carrying a large box-shaped container, on the side of which was the logo of a Nordic knot work with the runic H in the center.

"I know what you are going to say," Ola began. "I thought the same thing when I saw the rune."

"Fill those of us in who are not taking Scandinavian studies," Emili said.

Ola laughed. "Do you really want to know, or will you say that I am crazy for even knowing this stuff."

"It all depends what you are going to do with it. Who knows, you might grow up and become a famous vlogger."

"That came out of left field," Kristen muttered.

Of course, it was the question everyone in the car wanted to know.

Chi, in the passenger seat, loudly slapped her leg. "Oh, that's great. So, we don't even have to know what's in the box to know that it's meant to destroy us all?"

"It only means that this is a time of testing, right, Ola?" I wanted confirmation.

"It could also mean what I just said. Whatever they have found could destroy us all."

I felt the slightest shiver run down my legs, like ice cubes dragged after sharp nails, and I knew Ola felt it, too.

Our gazes met in the mirror, and her face took on a blueish tinge of magic, an image I shouldn't have been able to see.

I'd asked for a sign, but I never thought the gods would give me the warning of destruction.