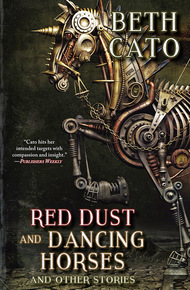 Nebula Award-nominated Beth Cato is the author of the Clockwork Dagger duology and the Blood of Earth trilogy from Harper Voyager. She's a Hanford, California native transplanted to the Arizona desert, where she lives with her husband, son, and requisite cats. Follow her at BethCato.com and on Twitter at @BethCato.

This debut collection from Nebula-nominated author Beth Cato brings together works that span history and space, a showcase of vividly imagined speculative stories that range from introspective and intense to outright whimsical. Here you'll find the souls of horses bonded into war machines of earth and air, toilet gnomes on the rampage, magical pies, a mad scientist mother, a bitter old man who rages against giant extraterrestrial robots, and a sentient house that longs to be a home. The book features 28 stories and 6 poems, and includes Cato's acclaimed story "The Souls of Horses."

Beth and I have been friends for longer than we've had publishing careers so I've read a lot of her work. She's been nominated for and won awards for her novels and poetry but, honestly, my favourites are actually her short stories. They are vastly underrated and totally awesome—and this book has got twenty-eight of them. None of these stories deal with literal psychopomps but there are souls transferred from one vessel to another and that's a similar flavour. – Rhonda Parrish

No horses existed on Mars. Nara could change that.

She stared out the thick-paned window. Tinted dirt sprawled to a horizon, mesas and rock-lipped craters cutting the mottled sky. It almost looked like a scene from somewhere out of the Old West on Earth, like in the two-dimensional movies she studied on her tablet. Mama thought that 20th-century films were the ultimate brain-rotting waste of time, so Nara made sure to see at least two a week. Silver, Trigger, Buttermilk, Rex, Champion—she knew them all. She had spent months picturing just how their hooves would sink into that soft dirt, how their manes would lash in the wind. How her feet needed to rest in the stirrups, heels down, and how the hot curve of a muzzle would fit between her cupped hands.

The terraforming process had come a long way in the two hundred years since mechs established the Martian colonies. Nara didn't need a pressure suit to walk outside, but in her lifetime she'd never breathe on her own outside of her house or the Corcoran Dome. There would never be real horses here, not for hundreds of years, if ever. But a mechanical horse could find its way home in a dust storm, or handle the boggy sand without breaking a leg. She could ride it. Explore. It would be better than nothing. Her forehead bumped against the glass. But to have a real horse with hot skin and silky mane…

"Nara, you're moping again." Mama held a monitor to each window, following the seal along the glass. "No matter how long you stare out the window and sulk, we can't afford to fly you back to Earth just to see horses. They're hard to find as it is. Besides, you know what happened when that simulator came through last year."

Yeah. Each Martian-borne eleven-year-old child had sat in a booth strung with wires and sensors so that they could feel the patter of rain and touch the flaking dryness of eucalyptus bark. Nara smelled the dankness of fertile earth for the very first time. She threw up. The administrators listed her as a category five Martian, needing the longest quarantine time to acclimate to Earth, if she ever made the trip.

"Blast it, another inner seal is weakening," Mama muttered, moving to the next window.

The dull clang of metal echoed down the hall, followed by the soft whir of Papa's mechs. Papa would understand. He would listen.

Her feet tapped down the long tunnel to his workshop. Nara rubbed the rounded edge of the tablet tucked at her waist. Sand pattered against the walls as the wind whistled a familiar melody.

The workshop stood twice as big as the rest of the household, echoing with constantly-clicking gears. The grey dome bowed overhead, the skylight windows showing only red. Papa's legs stuck out from beneath the belly of a mining cart, his server mechs humming as they dismantled the plating on a small trolley alongside him. The workshop was half empty. The basalt mine had received a new load of equipment just two weeks before, and as Papa described it, he'd have a lull before everything decided to break again. Judging by the lack of dents on this cart, the lull was already over.

"Hey, girly. Hand me the tenner," Papa said, a hand thrusting through a gap in the chassis. Nara passed him the tool. "What're you up to?"

"Nothing." Nara slipped open the tablet, expanding the screen with a tug of her fingers. After a few taps, she accessed the data she wanted: the anatomy of the horse. Her fingers flicked up, removing the layer of skin, then the muscles, leaving the bones. One of the nearby mechs bowed, his knees fluid and graceful as he picked up a tire and conveyed it to a stack on the far side. Nara squinted, looking between the mech and the screen.

"You're never up to nothing," Papa said. "Did Mama kick you out of the house?"

"Not yet. I was wondering something, actually. Think I could use the extra space you have in here to make a project?"

Wheels whined as Papa pushed himself out. "What sort of project?" Grey and red smudges framed the skin around his goggles.

Nara held up the tablet, projecting the images out six inches. Papa chuckled low. "Why am I not surprised?" he asked. "You want to build a horse?"

"Oh, I know you can, I just didn't think you'd settle for that. Let me see." He held it directly overhead, then grunted as he passed it back. "The leg structure's not that different than the diggers you helped me with last month. Your main issues will be balancing the mass and nailing the AI."

She nodded, her mind already filtering through the possibilities. She had to think of horse breeds, no—she would think of specific horses. Trigger, her favorite. He was tough and fast, with all the grace of a dancer. Oh, how he could dance. His hooves shuffled, his gold skin shimmering and muscles coiling. Nara would watch him, holding her breath. Nothing on Mars could move like that.

"You'll have to use the scrap pile," Papa continued, snapping her out of a reverie. "But if you need anything fresh, you need to order through me, and you'll have to work for it. This isn't going to be cheap."

"Cheaper than a trip to Earth," Mother said from the doorway. "And speaking of expenses, we're going to need inner sealants replaced on three windows as soon as this storm is over. One gap was so big a fiend beetle could almost squeeze through from inside the walls, and God knows what it would cost if one of those got in."

"As if it's ever just one," Papa said, shaking his head. "Well, we're due for a full sealant inspection anyway."

Nara closed the equine anatomy charts, her eyes already taking in the nearest scrap pile and a stout piece of pipe ideal for a femur. Mama and Papa's chatter faded. She tapped her fingers along the tablet, already picturing a horse of her own, programmed to nuzzle her shoulder and whicker in greeting.

Papa was wrong. Balancing the mass would be easy. The artificial intelligence could be adapted from existing programs. Realism was the issue. A glossy hair coat, a trailing mane and tail, the musty smell described in the old books she'd read.

Worst of all, she might never know if she got it right.