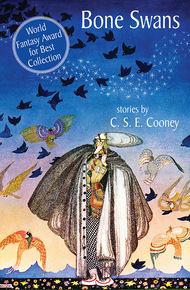 World Fantasy Award-winning writerC. S. E. Cooneyis the author of Desdemona and the Deep, and Bone Swans: Stories. She has narrated over a hundred audiobooks — including her own — and has produced three albums as the singer/songwriter Brimstone Rhine. Her poetry collection How to Flirt in Faerieland and Other Wild Rhymes includes "The Sea-King's Second Bride," which won the Rhysling Award for best long-form verse in speculative poetry. Her short stories and poems can be found in numerous anthologies and magazines: most recently Jonathan Strahan's Book of Dragons, and Ellen Datlow's Mad Hatters and March Hares: All New Stories from the World of Lewis Carroll's Alice in Wonderland. Learn more online at csecooney.com.

A swan princess hunted for her bones, a broken musician and his silver pipe, and a rat named Maurice bring justice to a town under fell enchantment. A gang of courageous kids confronts both a plague-destroyed world and an afterlife infested with clowns but robbed of laughter. In an island city, the murder of a child unites two lovers, but vengeance will part them. Only human sacrifice will save a city trapped in ice and darkness. Gold spun out of straw has a price, but not the one you expect.

World Fantasy Award winner Ellen Kushner has called Cooney's writing "stunningly delicious! Cruel, beautiful and irresistible." Bone Swans, the infernally whimsical debut collection from C. S. E. Cooney, gathers five novellas that in the words of Andre Norton Award winner Delia Sherman are "bawdy, horrific, comic, and moving—frequently all at the same time." Cooney's mentor, Science Fiction and Fantasy Writers of America Grand Master Gene Wolfe, proclaims in his introduction that her style is so original it can only be described as "pure Cooney," and he offers readers a challenge: "Try to define that when you've finished the stories in this book."

I love the way Cooney writes. It's clear, and lovely, and voice-y (which is totally a word). The novelette, "The Big Bah-Ha" which is included in Bone Swans is absolutely perfect for a Story Bundle about psychopomps and crossing the veil and the collection as a whole is a fantastic introduction to her work. You'll thank me later. – Rhonda Parrish

Excerpted from novelette "The Big Bah-Ha"

Beatrice did not wake up in Heaven.

She lay flat on her back. The surface beneath her was hard as concrete, maybe bouncier, like those playgrounds made from recycled tires. Bitter crazy cold out, but she could not see her breath.

Not panic. Not exactly. A pang, maybe. Best not to pay attention to that. Might begin to gnaw holes in a girl when a girl most needs to be whole.

So Beatrice sat up and patted her head. Pigtails still held, thank the Good Goddess Durga, as Dad used to say…although Dad hadn't believed in any pantheon predating Darwin, had gone gravy to the slaprash an atheist and a scientist and taking in vain the names of all fiend-eating ladygods sharing cross references in the 'cyclopedia.

'Spossible,she thought with an inward sparkle of enthusiasm,I meet up Dad in this place. We'll discuss gods, or death, or breathing without breath, or whatever, like we used to do in the olden days, except…

Except this place seemed to stretch out forever like an elastic elephant skin. Empty. Or—not empty? There. A gleam of red and white, listing not too far from where she sat. A striped barber's pole. A fat white glove at its pinnacle wriggling HELLO. The arrow of its index finger urged her down a path.

The path, Beatrice saw, was the same gray as ground and horizon, easy to miss. Just a thin groove to be picked across like the wirewalkers used to do under the big tops. Or a girl might elect to stroll with more dignity along its side. If a girl followed it at all.

But standing still invited the biting chill, and Beatrice shivered. The pointing glove reminded her of the Flabberghast's hands, which were just as white, but much slimmer. Slim and graceful, nearly transparent, the fingers too long and the wrists too bony. He was the last thing she remembered: his long painted face peering at her through the bushes, his eyes shining black as beetles.

"He killed me!" Beatrice said aloud, startled. "Him and his diamond teeth."

Well, she didn't remember that part, not ezzactly. Not the getting gobbled part, only the part where he smiled.

But she was here, wasn't she? And here could be anywhere, but it could also be in the Flabberghast's stomach. And even if here were really elsewhere, she'd bet she'd left her bones behind to undergo eternal digestion. Danged Flabberghast! Old carrion eater. Old clown.

But how'd he get close enough? Beatrice had lived by the same command she'd drummed into her little Barka Gang. If she'd told Tex, Diodiance, Granny Two-Shoes, and Sheepdog Sal once, she'd told them a kajillion times: "Beware the Flabberghast."

And when they asked her why, she'd said, "Well, because he's a Tall One. Because he appeared in the gravy yard with the other eight after the world ended. Because he's here to eat the bones, and he'll eat yours when you go."

"So?" Diodiance always asked. Diodiance liked the Flabberghast, liked his cardboard hut, his yellow shoes, his little way of bowing low. "We ain't dead yet, so he can't rightly eat us. Till our slaprashes show, Queen B, mayn't he come over to play?"

Quick as a slung-shot rock, Beatrice always parried, "What if Ol' Flabby don't feel like waiting till your slaprash shows? What if he picks up a crushing stone with his weird white hand and caves in your skull, strips your flesh to stretch upon a great moony drum, and sucks your bones good and fresh? The Flabberghast's notcontainedlike the other Tall Ones. The gravy yard gates don't hold him. Lives outside the arch in his cardboard hut, don't he, while his friends slaver and babble and gobble up crypt-crunch behind the black iron bars, those white lights on their shoulders a-shinin'. And don't he smile to be so free, aiming his big, bright teeth at any kiddo strayin' bold from her gang."

Tex, taking her pause for breath as permission, would jump in to plead with Diodiance: "Di, don't stray." Those two were just each other's age, just shy of nine. His ashy, stiff hair stood on end at the thought of losing her.

And Beatrice, more quietly, made sure to repeat what they'd all heard before. "Don't stray." She gazed at her Barkas with the solemnity of her age. Twelve now, or thereabouts, and they all knew the slaprash would get her soon. Watching them remember this, she'd soften her fierceness to a smile.

"Barka dears, this is world's end. You've only got a few years left to your names. You gotta live 'em, not go playin' flirt to Death's own maggotman—no matter how he smiles and bows. Don't go near the gravy yard. Don't stray. And beware the Flabberghast."

Sighing for her lost Barkas, Beatrice pushed herself up from the squishy hard ground. Her gait felt off. She glanced down.

Not only that, but the white cotton lace edging her left sock had gone all rusty. Looked old. Looked like it'd been dragged oh, many a long mile. Or like something had bled all over it. Someone.

Beatrice bit her lip, and even that felt like nothing, and she covered her eyes with her hands, but there was only the same gray inside as everywhere else. The thought of limping listlessly along that thin gray groove with only one shoe and a rusty sock was the three-ton straw set atop a brittle-boned and spindly-kneed camel, and it was enough, it wasoutside enough!

Beatrice crumpled and began to cry.

Above her, pouring from a rip in the empty sky, something like ravens circled.