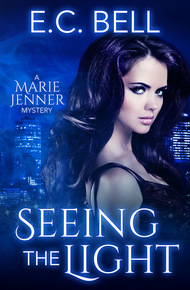 E.C. (Eileen) Bell's debut paranormal mystery, Seeing the Light (2014) won the BPAA award for Best Speculative Fiction Book of the Year, and was shortlisted for the Bony Blithe Award for Light Mystery. The rest of the books in the series have all been shortlisted for awards (look at her go!), with the fourth in the series, Dying on Second (2017) winning the Bony Blithe Award for Light Mystery.

When she's not writing, she's living a fine life in her round house with her husband and their two dogs. (Only one of the dogs has made it into her books so far, so don't tell the other one, OK? She doesn't want to hurt his feelings.)

Want to know more? Check out her website: www.eileenbell.com

Seeing the Light by E.C. Bell

Marie Jenner has never had much luck. Her job sucks. Her apartment—the one with the unbreakable lease—has a ghost. And worst of all, her mother won't let up about her joining the "family business." Since that business is moving the spirits of the dead on to the next plane of existence and doesn't pay at all, Marie's not interested. She wants a normal job—a normal life. That's not too much to ask, is it?

Apparently, it is. Even when she applies for the job of her dreams, Marie doesn't get what she wants. Well, not entirely. She does get the job—but she also gets another ghost. Farley Hewitt, the newly dead caretaker of the building, wants her to prove his death is not an accident, and she's pretty sure he's going to haunt her until she does.

All she wants is normal. She isn't going to get it.

The series' main character, Marie Jenner, is a psychopomp in the classic sense of the word—she guides souls to the other side. Much to her chagrin.

It didn't go that way. Of course.

There was only one other interviewee waiting in the small reception area in the office of Don Latterson's import export business, called, not too imaginatively, Latterson's Import Export.

"Wish me luck," she said, when Mr. Latterson silently hooked his finger at her, calling her into his office.

"Good luck," I said. I didn't mean it. I wanted the job for myself, after all.

When she ran out, sobbing, three minutes into her interview, I felt guilty, like I'd somehow jinxed her. I also felt relief. Maybe I had a real shot at the job.

It wasn't a lock, of course, because sometimes my big mouth gets me into trouble, but things were looking up.

Don Latterson stepped out of his office. He was in his forties and starting to run to fat. His hair, what little that was left if you don't count the absolutely atrocious comb-over, was brown streaked with gray, and his blue eyes looked parboiled, like he'd drunk his lunch instead of eating it.

He hooked his finger at me, and I followed him into the office, shutting the door behind me. Then I waited for him to offer me a seat so that the interview could begin.

He did not do that. He sat down himself and stared at me until I felt acutely uncomfortable, and then pointed at an electric typewriter sitting on a small table by his desk.

"Do you know what that is?" he asked.

I wondered if there was some trick to the question. "An electric typewriter?" I finally asked.

I was sure I'd seen a computer on the desk out in the reception area. Did he actually expect me to type stuff on one of these?

Whatever. He's the potential boss.

It was at that moment that I felt cold air wash over me. I turned around, thinking I hadn't latched the door properly. That's when I saw the ghost.

He stood half in and half out the closed door, staring at me. Stupid me, I stared back.

I knew better than to make eye contact. Dead's dead and better left alone, but he caught me off guard.

"Can you see me?" the ghost asked, looking just about as shocked as I felt.

"Oh no," I whispered. He wasn't just dead. He was aware that he was dead. Good grief, why had I made eye contact?

"Holy shit, you can see me!" the ghost cried.

I shook my head, a completely useless thing to do, because it just proved beyond a shadow of a doubt that I could, in fact, see him. Then Mr. Latterson spoke up. He didn't sound happy.

"What did you say?" he barked. "Turn around and answer me this instant."

Oh lord. I needed to regroup, and I couldn't do it in front of my potential boss.

"Can you excuse me for just one moment?" I asked. Without waiting for his answer, I left his office, shutting the door in his very surprised face.

I heard the ghost follow me, and in the reception area he actually started dancing. I closed my eyes for a second, in a vain attempt to compose myself. He couldn't have picked a worse time to make his appearance, and here he was, dancing around like an idiot or something. I had to get hold of the situation, and I had about two seconds to do it.

He stared at me, caught in mid-caper. "What?"

"You have to go away!" I yelled, and then turned toward Mr. Latterson's closed door, wondering whether he'd heard me. He probably had. He was probably in the process of tearing up my resume.

My throat thickened with quick tears. This would have been a good job. A really good job.

"You won't get the job if you cry," the ghost said.

I walked to the door leading to the hallway, intending to leave, when I thought about my crappy job at the Yellowhead Cab Company. I had to get away from my boss, Gerald the Tyrant, and paycheques that never quite paid all the bills. Not all in the same month, anyhow.

I thought about my mom. She was sick, and she was counting on me.

I needed this job. Even with a ghost.

The dead guy looked confused. "What do you mean?"

"How long have you been dead?"

If it was just a couple of days, there was a good chance he'd move on all by himself. I wouldn't have to do a thing.

"Oh." He took a deep breath, even though he didn't need to do that anymore, and I could see he'd been holding in his stomach. I tried not to roll my eyes. Men.

My heart sank. Seven days. That was almost too long. He might be stuck.

"I've been able to see all of you since I was little." I shook my head. There was no time for small talk. "Listen—"

"Farley," he said, and smiled at me, looking pathetically happy. "My name is Farley Hewitt. And you are?"

"Marie," I said quickly, knowing this was wrong too. I felt like I was in a car crash I couldn't stop. "Farley, I can't finish the interview with you in the room. You're distracting, know what I mean?"

He nodded eagerly. It was getting pathetic. Almost as pathetic as me acting like I still had a chance at this job.

"So, leave. Please. If I get the job, I'll be here tomorrow." I wasn't getting the job. I already knew that, and felt the sigh come up from the bottom of my soul. "We can talk then."

As he headed for the door that led to the hallway, I realized I had no idea what I was going to say to the living man standing on the other side of the door. I must have made a noise—probably a sob, I was feeling that desperate—and the ghost turned back to me.

"I can't think of one thing to say to Mr. Latterson that would explain why I ran out of his office in the middle of my interview." My throat tightened again, dangerously. "I'm never going to get this job."

Farley pointed at the desk behind us. "Tell him you thought you heard the phone ringing out here. He just got this system and tried to set it up himself. It won't ring in his office. He screwed it up."

I recognized the phone system sitting on the desk. It was the little brother version of the one I used at the Yellowhead Cab Company, the job I was desperate to leave. I knew what Mr. Latterson had done wrong—what everybody did wrong when they tried to set these things up on their own. I touched a few buttons and my heart quit beating so trip hammer hard. It might work.

I nodded at the ghost, to thank him for the help. Then I threw my shoulders back, slapped the smile on my face, and opened the door to Mr. Latterson's office.

Fixing that phone saved my interview. Mr. Latterson was so impressed when I made it ring that he hired me on the spot.

"Welcome on board," he said. "You start tomorrow morning. Eight sharp."

Then he pointed at the door and said, "Get out."

I had the job of my dreams. I also had a ghost. And the ghost got me the job. What was I going to do?