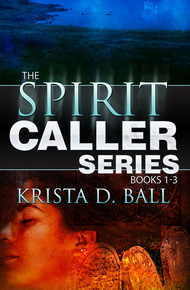 Krista D. Ball is an award-winning author originally from Newfoundland and currently living in the frozen wasteland of the Canadian prairies. Author of over twenty books, including the popular What Kings Ate and Wizards Drank fantasy food guide and the quirky Ladies Occult Society series, Krista can be found most days avoiding work on Twitter and Reddit.

The man she's in love with? Taken. The job she loved? Gone. Her neighbours? They're taping religious tracts to her door. Then a rebellious teenager Wiccan accidentally summons the area's ancestral Viking spirits — who promptly bring their thousand-year war to the remote Newfoundland fishing village. If Rachel's going to have any hope of sending the spirits to their peace, she'll have to stop drooling over unattainable men and trust her 93-year-old neighbour to help her stand against the spirits before their supernatural war engulfs them all.

This omnibus contains the first three novellas of the SPIRIT CALLER series.

Spirits Rising: Rachel has no trouble believing in spirits. It's the living she has a tough time believing in.

Dark Whispers: As Rachel helps the school investigate a rash of teensuicides, painful memories from her past - events she'd worked very hard to forget - resurface and won't go back into the grave where they belong.

Knight Shift: After a lifetime of running away from spirits, Rachel Mills finds herself chasing them.

This boxed set contains the first three books in the series about Rachel and her 'Scoobie Gang'. Rachel is a psychopomp—she sends spirits across the veil to where they belong—and she makes her KD (that's Kraft Dinner to those of you who aren't from Canada) with "any non-corrosive liquid" including those with alcohol. And if that doesn't make you want to 'meet' her in this book, honestly, I don't know what will… – Rhonda Parrish

Manny ran up to me, panting. "They're inside, in the basement," he whispered, though he was breathing so heavily it wouldn't have mattered.

I eyed Manny for a moment, looking for evidence of drug use or intoxication of any form. A bad drug trip, or to some a good trip, could make you hallucinate almost anything. I knew a girl in high school to whom the Virgin Mary appeared and cooked her bacon and eggs every Sunday during church. Then, we found out she was also doing a double hit of acid before the sermon. Hell, I believe in the spiritual and supernatural and I'm convinced that most of the sightings out there are drug-induced.

With enough experience, a person could generally tell by a four-second look into someone's eyes. I'd learned that growing up in the north where too many of my friends fell in with the troublemakers. He looked clean, even though his eyes were wide and his face flushed.

Sensing what I was doing, Manny rolled his eyes. "Come on, I'm not on drugs. Can you just come in? Please?"

I hid a smirk. Apparently, his father had tried that technique on him a few times. "I'm just waiting for Constable Garrett."

I heard the rumble of a vehicle and looked over my shoulder. A white RCMP vehicle with the standard Mountie-on-a-horse-holding-a-flag emblem painted on the door pulled into the driveway. I waved at Jeremy, who joined us quickly.

He was still in the navy blue uniform, though his Kevlar vest and radio earbud were notably missing, no doubt discarded in his car as soon as his shift ended. He was a good-looking man, with easy features and a sly grin. He was around my age, late twenties, and taken. Very, very taken. Hence my solo vacation.

I wasn't sure if the mounting headache was from the other or from seeing Jeremy. I really needed to move away from this man. Too bad lesbianism wasn't contagious; I'd be open to almost anything to get me over that idiot. Either way, the pressure behind my eyes built momentum.

Manny was clearly less impressed with Jeremy than I was because he went wide-eyed and glared at me. "He's totally going to tell Dad! I'm so dead."

"Murder is illegal and I doubt your father would do anything to break the law," Jeremy said, giving me a wink. I did not collapse into a puddle on the ground because, you know, danger and spirits and all that fun stuff.

"Besides," Jeremy said, turning back to Manny, "I didn't tell your father about the time I picked you up on the side of the road after you'd passed out and a moose was licking vomit off your chest."

I made a disgusted sound. "Eww. Thanks for that."

A loud crash came from inside. The three of us snapped our heads around to face the house. "What on earth was that?" I asked.

"I have no idea." Manny sighed, as though resigned to the gallows. He looked at me, pensively. "No one else would have believed me and I figured you'd know what to do. I don't know anyone else who's into witchcraft."

"I don't practice witchcraft," I mumbled. Muffled drumming drifted from the house and I shifted my gaze to Jeremy, who shrugged. "Okay, let's go."

Manny let out a deep breath, as though he'd been holding it. "Okay. Um, thanks, by the way."

I frowned. "All I know is that there'll be hell to pay if this is Billy Watkins dressed up to scare you."

Manuel frantically shook his head. "It's not Billy."

The three of us walked towards the house. I'd never been inside David O'Toole's house. He was the local deacon at the Pentecostal church and had never been overly nice to me. Oh, sure, he was always inviting me to church and smiling whenever he came across me at the grocery store in town, but I knew he called me "witch" behind my back.

I'm not even Wiccan.

Having Jeremy with me would make it legitimate. Besides, it's never a good idea for an adult to go visit a teenager when their parents are away and when those parents think you are in league with the Devil, capital D. Jeremy was an RCMP officer. That made it all nice and tidy for the paperwork in case these were home invaders.

As we approached, the drumming grew louder. Laughing and singing spilled up from inside the basement. I crept in behind Manny who pointed down the stairs to a finished basement, a rarity in these old homes.

When I reached the bottom of the stairs, my jaw dropped. Manny's parents, Irene and David O'Toole, belonged to the local welcoming committee. But I was certain that they'd never purposely invite a dozen drunken Vikings, in full fur-and-sword regalia, into their home to drink Black Horse Beer and Newfie Screech.

"What the hell," Jeremy said.