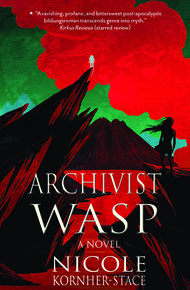 Wasp's job is simple. Hunt ghosts. And every year she has to fight to remain Archivist. Desperate and alone, she strikes a bargain with the ghost of a supersoldier. She will go with him on his underworld hunt for the long-lost ghost of his partner and in exchange she will find out more about his pre-apocalyptic world than any Archivist before her. And there is much to know. After all, Archivists are marked from birth to do the holy work of a goddess. They're chosen. They're special. Or so they've been told for four hundred years.

Archivist Wasp fears she is not the chosen one, that she won't survive the trip to the underworld, that the brutal life she has escaped might be better than where she is going. There is only one way to find out.

You've heard of this book. I know you have. And if you haven't read it yet you're curious and want to. And rightly so. Not only is the quality of the writing top-notch but the story is full of the Underworld/crossing the veil flavour that you're craving. Trust me. – Rhonda Parrish

As it did every year in the days that followed the Archivist-choosing day, Wasp's recovery routine kicked in each morning even before she'd come completely awake. It was her third year as Archivist, after all, the third year she'd stayed at least a week in bed so the wounds could knit themselves to scabs, then scars. By now, the steps came to her easy as breathing.

One. Check the bandages.

The smallish ones on her neck, legs, and shoulders, then the wide one at her side where the third upstart's second knife had gone in and stayed—until Wasp had pulled it out and flung it at her head, ruining an ear. Also the set of neat stitches tracking down her lower lip to her chin, and the other one cutting across the old scars on her cheekbone and up into her temple.

For the first few days, this was as far as she had gotten before pain and exhaustion had overcome her, and she'd spent those days drifting in and out of healing sleep, in and out of less productive nightmares.

This took longer than she would like, and she expected any moment to feel the pull and gush down her hip where the deep wound had reopened. She dreaded this, of course, but more than that she dreaded another round of festering and a fever high enough she could practically boil water on her forehead when she tried to treat the newly opened wound herself. Exactly a year ago she'd nearly killed herself doing exactly that, but she was fairly sure she'd do it again. A choice between a moment with a heated knife and a bottle of spirits and a rag to scream into, or letting the midwife back at her, didn't seem to her like much of a choice at all.

There was a pull, but no gush came.

The fracture in her ankle screamed but held, and a glance at her bandaged side in the light discovered no bloodstains, no greenish watermarks of pus. She took a deep breath, gritted her teeth against what was coming, and bounced a little on her toes to see if they'd take her weight.

If she ground down hard on whatever desperate messages her ankle was firing at her brain, she could push through or outstubborn the rest.

Four. Get back to work.

Her injuries were different (and, alarmingly, more plentiful) than last year's, so, as she did every year, Wasp improvised, inching her way back out into the world.

Two weeks in bed had taken their toll. Her arms felt weaker, somehow stiff and rubbery at once, as did her legs. When she bent down to touch her toes, the muscles in the backs of her thighs began complaining even before the wound at her side got its say. Squatting over her pissing-pot was agony. So she tried to stretch her back and instantly her side felt like someone had stuck a pick in it and twisted.

She paced a bit, feeling like a caged cat, trying to outwalk the pain. She wished she could limp back into bed. Sleep, dream, let the Catchkeep-priest set the upstarts at each others' throats until whoever was left standing became Archivist in her place. There would be another soon enough at this rate anyway.

But there was the backpack in a corner, and therewere the jars and knife and saltlick, and she never would have gotten away with it. Wasp knew quite well that two weeks abed was already enough of a display of weakness, without adding any more wasted days on top of it. She knew what the dozen surviving upstarts must be saying about how long it'd taken her to beat the three who'd drawn this year's short straws, and how many wounds they'd given her. How Wasp just wasn't what she used to be. How next year it'd be her on the wrong end of the knife. It had to be eventually. It always was.

She couldn't keep that day from coming. But she could push it out of reach a little longer.

So she limped her way over to the far wall, where the painting was.

The bones of the painting were nails, hammered straight into the wall to pick out the stars of Catchkeep's constellation. And around them She had been outlined in thick black paint, all teeth and legs, Her back curved like a rainbow, caught in mid-leap over a shadowy abyss. On one rocky shore of it a woman stood, tiny in comparison with Catchkeep, Who spanned the wall. She held an open jar out in front of her with both hands. Gray fog drifted from the jar, up toward Catchkeep, forming into figures that clung to Her back as She carried them to the far shore. That shore itself was misty, hard to make out—but green, greener than anything Wasp knew. She wasn't even sure what had been used to paint it.

In little drips of color that same green was radiating off of the gray figures, drifting back toward the woman. There was a book by her feet, and the greenness went there and infused it with a glow. From there it floated off behind her in threads to tint the shadows at her back. On her side of the abyss, it was the only color whatsoever.

Catchkeep Herself was black and red. Stepping close to Her you could make out the outlines of handprints, darker where they overlapped. Wasp's first day as Archivist, they'd rushed her here before the blood of the fallen Archivist could dry on her palms, and to the painting she had added the shape of her hand, which was the shape of her predecessor's death. Sometimes she wondered where that Archivist's handprint was in the painting, whose blood had made that mark. Sometimes she wondered which part of Catchkeep her own blood would redden, whose hand it would be in the shape of.

Wasp didn't need to come close enough to read the words painted in above Catchkeep's beartrap of a head. She'd known them by heart for years. Every day she went out to do the work, she stopped here and said the words first, like every Archivist before her. Now more than ever, she needed them to keep her safe.

She bowed her head before all that long-dried blood.

"I am the Archivist. Catchkeep's emissary, ambassador, and avatar on earth. Her bones and stars my flesh; my flesh and bones Her stars. Mine is the mouth through which the dead world speaks. Mine are the hands that record what the dead world left behind. Mine are the eyes that hold vigil, so that the old world's death does not return to kill the world anew. Protect me, Catchkeep, until another stands before You here, as I stand where another stood. Protect me so that I can do Your work, until my flesh fails, until my bones fail, leaving only Your stars, which light the earth forever."

She felt like a fraud even saying the words. In freeing the last upstart she was supposed to kill, she had spit on the very rituals she was calling upon now to keep her alive.

But she could still do the work, and she'd keep on doing it until she found a way to break free. It seemed to be enough for Catchkeep. After all, Wasp had lost count of her attempts to rebel against the Catchkeep-priest and escape, and Catchkeep hadn't yet come down out of the sky to murder her.

Besides, it wasn't the work she minded. It was everything else. Next to that, the work was downright soothing. What could the dead do to her that the living did not do already?

She shouldered the backpack and stuck the harvesting-knife in her belt. Pulled on her shoes. Gulped down half the stale contents of her water-jug and poured a cupped handful to splash her face. Eased off the bandages, all but the big one at her side, which her shirt would cover. Stuffed some flatbread and raisins in a pocket to eat while she walked. Stopped, one hand on the door, to glare over her shoulder at the room: cot, shelves, braided rag-rug, not much else. A few hanging strings of wild garlic, peppers, apples, drying or dried. A few changes of homespun clothing. The box that held her field notes. Everything but the food had been handed down from dead Archivists, inherited with the little house itself. No knowing how many Archivists had patched and mended those clothes before her. From the look of them, plenty. But Archivists had been adding field notes to that box for four centuries. In them was all the knowledge they had ever gained from their studies, going back and back to when the first Archivist was given the harvesting-knife and learned what it was for.