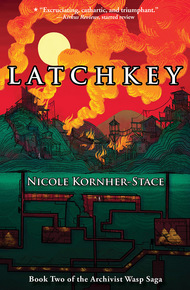 Isabel, once known as Wasp, has become leader of the fearsome upstarts, the teen girl acolytes who are adjusting to a new way of life after the overthrow of the sadistic Catchkeep-priest. They live in an uneasy alliance with the town of Sweetwater—an alliance that will be tested to its limits by the dual threats of ruthless raiders from the Waste and a deadly force from the Before-time that awaits in long-hidden tunnels.

Years ago Isabel befriended a nameless ghost, a supersoldier from the Before-time with incredible powers even after death, and their adventure together in the underworld gave her the strength and knowledge to change the brutal existence of the Catchkeep acolytes for the better. To save Sweetwater, Isabel will have to unlock the secrets of the twisted experimental program from centuries gone by that created the supersoldier and killed his friends: the Latchkey Project.

Latchkey continues the story begun in Kornher-Stace's widely acclaimed Archivist Wasp, an Andre Norton Award finalist that was selected by Kirkus Reviews as one of the Best Teen Books of 2015.

I think it's amazing that not only are we able to offer Nicole Kornher-Stace's critically-acclaimed novel, Archivist Wasp, in this bundle but also its sequel, Latchkey. That means absolutely zero delay between when you finish the first book and can start the second. And that's pretty awesome. – Rhonda Parrish

Soon they'd gone far enough that the collected lamplight of the cleared area beyond the hatch couldn't reach them. The sounds of the townspeople could only be heard faintly, wavering, like murmurs at the bottom of a well. Ahead was black. Behind was black.

"I get to help Glory kill them," Sairy was muttering. "She can hold them down."

It was made of some kind of metal that had only barely begun to rust, which amazed her, given the humidity of the tunnels and the sheer age of everything in them. It was rectangular, as heavy-looking as the hatch door, with a small opening at eye level set with the remains of what used to be a tiny window, glass layered with a very resilient-looking synthetic mesh.

There was a dent in the center of the door like someone had catapulted a boulder at it.

Isabel didn't like the look of this door one bit. It didn't look like a door for going in and out of. It looked like a door built in the same spirit as an Archivist's ghost-catching jars. For locking something up and taking field notes on it, and eventually letting it out into someplace even worse.

Sairy shouldered open the door on shrieking hinges and shoved her lamp-arm in. Nothing.

There was an identical door beside that one, and another beside it. Another across the hall. Another next to that. And so on. Several had been dented by some great force. Some had been ripped straight out of the wall and flung an improbable distance. Like someone at some point had gone to considerable trouble to trash this place to hell, and had gone about it methodically, systematically, door by door by door.

"Well," Sairy said, shining the lamp down that field of doors. "That's creepy."

Isabel didn't reply. The nervous itching on her wrists was getting truly awful now, and spreading to her neck and hands. She scratched under the ghostgrass bracelets covertly.

Inside each room was nothing. Same floor, same walls, same ceiling. All apparently once white and white no longer. Isabel couldn't even imagine what it must've looked like, all that white. Like staring down on the Waste from a height when fresh snow was on it, so bright in the sunlight that it hurt the eyes.

Each little room itself was empty but for the remains of where something had once been bolted into the wall in two places before the bolts rusted through. A bed of some kind, maybe, a narrow metal slab. On the other side of the room there was a hole where a pipe had gone into the wall, attached presumably to something else, now collapsed into rubble or missing altogether.

It came to Isabel that each door had a handle on the outside, but the inside was smooth.

No Onya, no Andrew. They moved on.

By the eighth room, Isabel was starting to get dizzy. When had she last eaten? Her vision was going weird around the edges, like she had a migraine coming on. And it was taking every crumb of her willpower not to scratch her itchy wrists to bleeding.

"What do you think did this?" Sairy asked, voice hushed. Raising the lamp at a door that, to all appearances, had been thrown so hard that the edge of it had embedded itself in the wall.

Despite herself, Isabel reached out and touched it, and Sairy gasped.

"Isabel, what the hell."

Sairy grabbed her hand and dragged it by main force into the light.

There was an angry red rash on Isabel's wrist and palm.

"Of course I'm okay." Reclaiming her hand. Shoving it into a pocket. Her conversation with Rina earlier was returning to her uncomfortably. His skin is stinging him? "Come on. They can't be far. You go on ahead." Swallowing her pride. "You're faster."

"So I'll follow it. The longer we wait the farther they get." Isabel gestured up that endless corridor of rooms. Chooser, she was dizzy. "I'm right behind you."

"I'm going to kill them," Sairy muttered again, and hauled open the next door.

Isabel locked her focus on the ground at her feet, shutting out the migraine aura edging in on the sides of her vision, and started walking.

No problem at all to trail Sairy. Her lamplight was easily close enough to safely follow. Nothing on the floor was likely to trip Isabel up even if she wasn't staring at it. Just the same even field of broken tile both ways, like the thin ice on a puddle that somebody had stomped. Broken tile and mud squelching up between.

Isabel had gone a few steps like that when she slipped on a patch of ice where that broken tile should've been and her feet shot out from under.

She went down in a heap and sat there. She felt, and probably looked, like somebody had just tried to brain her with a brick.

In the middle of summer?

She hitched in a steadying breath. It smelled wrong. The only parts of it she could identify were winter air and smoke, although she couldn't guess what would smell like that when burning. There was another smell almost like metal left out in the summer sun, at odds with the general smell of cold. And another like a sudden burst of improbable flowers as someone brushed past her and kept on walking, unseen, a shadow dissolving in the dark.

She scrambled back and hit a smooth glass wall. Which had about as much business being in these tunnels as the ice. Too startled to shout, she gave a kind of squeak and recoiled hard enough to almost flop over sideways and stared up and up and up at what used to be the low-ceilinged side of the tunnel, last she'd checked.

It was a building. A very tall building. Taller than any building, any tree, any thing she'd ever seen, short of Execution Hill—except in the city she'd entered in the ghost-place, the memory of a city from a time not her own. Glass and metal flashing blue in the low-slung winter sunlight. People walked past her, over her, through her. They didn't say anything or notice her there. They didn't smell like the people of Sweetwater. Their coats flapped against her like crows' wings.

It was a hallucination. Had to be. Bad air in the tunnels. Maybe that's why she'd been so dizzy.

Catchkeep, she thought. The Chooser. Ember Girl. Carrion Boy. The Hunt. The Ragpicker. The Crow. The One Who Got Away. Catchkeep's Tower. The Grave. The First to Die.

Even listing constellations wasn't cutting through this one. She felt like the tunnel had flipped sideways, not worming just under the surface but boring straight down for miles, and she was tumbling into the dark. Frantically, she marshaled her senses to anchor her.

It was silent, so if she was silent too she'd hear Sairy walking ahead. If she looked down she'd see the broken-eggshells-and-mud patterning of the tile floor.

She was quiet—and heard the footsteps of the not-there-people all around her. She glanced down—and froze.

There was a faint pale light coming from somewhere, and in it, she could just make out an even fainter silver thread, flickery but definitely there, emerging from her breastbone and fading to nothing as it fed out away from the light.

Strange, that light. It was a cold phosphorescence, like what was thrown by a ghost-passage, or a ghost—

She clung to the thread as something behind it, deep in her chest, lurched into freefall.

The light was coming from her.

"Not possible," she whispered. She wasn't in the ghost-place. She hadn't left her body.

Possible or not, the thread pulsed almost invisibly along with her heartbeat. It moved—the tiniest bit—in her breath. She plucked one dull flat note on it and did not dare touch it again, because she knew what it was, what it had to be, and that nothing good would happen to her if it broke.

In that instant, the sound cut out, and all was quiet.

The silence scared her worse than the noise. The noise was something she could track. She had a horrible feeling that the silence hid something that was tracking her.

She found her feet and tried to dart off through the crowd—and the crowd wasn't there. Mildewed walls, busted floor, slimy pond-smell, the warm humid stillness of the tunnels like a clammy hand laid across her face.

There was a person lying sprawled on the tile a few feet away. It wore a long brown coat and had short brown hair. The other end of her thread was sticking out of that body's chest. It was a moment before she realized it was her.

It was like startling yourself awake from a nightmare. She snapped back into her body so fast that for a moment it felt wrong, ill-fitting, unresponsive.

"Sairy?" she croaked. Unsure what she would say when Sairy answered. Can you see me? Did I disappear just now? Am I back?

Shakily, she stood. No more glow. No more thread. The dampness of the floor hadn't soaked through her pant-legs. She must've only been lying there a second or two at most. But it'd felt like many minutes had passed.

That unsettled her almost as much as the thread. She knew quite well where she'd experienced both of those things before.

Took two steps and stopped, splaying her hands at hip level as if the ground had just trembled underfoot. A weird feeling gripped her, one she couldn't begin to name. It felt almost like that untethering sensation she'd get when she was almost asleep. It put her in mind of soft mud being pressed through a loose-woven basket, or one stack of papers being shuffled into another. If she were the mud, the paper, pressed through or shuffled into . . . what?

So, she thought drily, because it was either that or lose it entirely. This is new.

"Isabel." Sairy sounded farther off than she should've. "Think I found them."