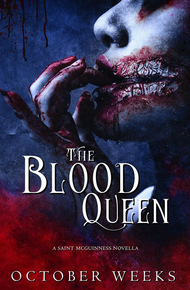 October Weeks is a dark fantasy/horror writer and a reader with too many books and not enough shelves!

She lives in Vermont. Autumn is her favorite season- October and November are her favorite months. She also writes paranormal romance under the name Libby Bishop.

Obsessions:Lindt dark chocolate and the paranormal.

The Blood Queen by October Weeks

A dark ghost is hunting young women along the east coast. Out of the fourteen linked to the spirit, only two have been found- their bodies tortured and drained of blood. The Paranormal Detectives and FBI agents working the case know two things for certain: the ghost is a woman, and she was smuggled into Boston from Eastern Europe.

Saint McGuinness hasn't been to her hometown of Boston in several years, haunted by the nightmares of her past. But when a good friend comes to her door and asks for help hunting those responsible for smuggling the dark ghost into the city, she can't say no. After witnessing the carnage that took place fifteen years prior, when the city was brought to its knees by the summoned Dark, Saint will do whatever she can to save her old stomping grounds from bleeding again.

Even if that means walking into the one place she never wants to see again- the Dark.

I kind of love novellas because they give a bit more depth than your average short story but don't require the time commitment of a novel. The Blood Queen is a novella which features a character that walks between worlds, making it a perfect snack of a story to indulge in between some of the longer titles included in this bundle. – Rhonda Parrish

She supposed answering the door in her Betty Boop tank top and black pajama shorts wasn't the best idea, but she wasn't one for formal at seven o'clock in the morning.

Saint McGuinness walked barefoot from the living room to the kitchen—a Glock 22 in her right hand and her bulldog, Mojo, following close behind her. Once in the dining room she took a left onto the screened-in porch. Looking through the windows of the door, there stood a man: slim, in his thirties, sandy blond hair, sporting a five o'clock shadow, and wearing dark blue jeans with a white button-down shirt. The top two buttons were undone, leaving a pair of sunglasses to dangle from the third.

Ben Bellamy: good friend and Paranormal Detective. Having him at her doorstep so early was never a good sign, though. Something was wrong. He even had a Dunkin' Donuts coffee cup in his hand.

"If you don't want to die a horrible, bloody death I suggest you state your business for being on my doorstep at this hour?"

Me, a morning person? Nope. It was even worse when she'd barely gotten two hours of sleep.

He grinned, and that lit up his green eyes. "Good morning to you, too, Saint," he replied. "Let me in. Promise I won't make you shoot me."

She rolled her eyes and then opened the door. "Come on in, Ben." She motioned for him to enter. After closing the door, she took the offered cup and bag.

Meeting his gaze, she asked, "What's the matter?" She took a sip of coffee. "Or did you just want your ass kicked in person instead of over the phone?"

She watched as his smile faded and his expression sobered. A knot formed in her gut. "What's going on?"

"You know about the young women who've been disappearing for the last three weeks?"

She doubted anyone on the east coast hadn't heard of the missing young woman. Fourteen in total, all aged fifteen to twenty, and all from different walks of life. The first three had been taken from Boston—her hometown.

"This is confidential information and it's the reason I'm here." He took a deep breath and met her gaze. "Two bodies have been found. Shortly afterward, the FBI learned that the being doing this is a strong, dark ghost. A woman, and she was smuggled in from Eastern Europe. With the condition of the two victims and that information, we are certain the ghost is one of the Blood Queens."

Her brow furrowed. "Where'd the info come from?"

"A man called the Paranormal Detectives office in Boston two days ago. From the research we have on Blood Queens and the bodies…" He shook his head.

Ben was one of two Paranormal Detectives in South Boston—also known as Ghoultown because of the attacks fifteen years prior—but he had started out his life as the son of a smuggler. Their fathers had run a crew together, but both had since retired. When cases involving the black market arose, Ben had an edge for finding information.

Only three Blood Queens had been recorded across the globe. Formerly human, the Blood Queens thrived off the blood and souls of the living. The darkness they carried in life bound them to the Deep Dark for the most part—they put Elizabeth Bathory to shame—but once in the Dark, their spirits twisted into something much darker. Something that was no longer just a ghost. However, despite being in that deep in the Dark, they could still be summoned by the living if that person was a powerful Summoner.

An entity as strong as a Blood Queen could only be imprisoned in an object they valued while living: a mirror, a brush, a necklace, a box, a book. Amulets and talismans were the most common for more formidable entities. The person binding the spirit had to be careful, though, because an amulet protected against negative energy and dark spirits, while a talisman could give power to the wearer. If the spirit had a strong enough attachment to the talisman, that spirit could end up more powerful when released.

She set her coffee on the table and folded her arms. "What do you need me to do, Ben?"

"I can only get so much information, Saint. You know that. But you? You can go in, move around, and while they know who you are, they also know that you won't turn them in because you aren't the law—you help us, but you've also saved a few of them." He sighed. "We need your help. I need your help."

He'd never ask her for help if he had another option. And since I've still got both feet in that world, I'm perfect for the job.

While ninety percent of her work was legal—escorting haunted objects, ghosts, beings, and beasts from the Dark and Glory, to where they could be safely sent back to their rightful places, including overseas—she also helped when her friends who still smuggled asked for help. She made enough money to be selective with both jobs, and since she was a private contractor, she had the luxury of being able to do so.

Because being a Darkwalker and Pulser comes in handy.

Regarding Ben, she again asked, "What do you need me to do?"

"Come to Boston and help me hunt the bastard who unleashed this monster and contain both of them."

She smiled. "You want me to do the dirty work?"

That made his grin return. "I'll pay you good money and cook you dinner when this is over."

As she picked up her coffee she said, "If I'm risking my life, you better pay double and it better be a stellar meal."

Saint shook her head. "Feed and walk the dog, please. Then call my dad so he knows what you're getting me into. I'll be down in a few."