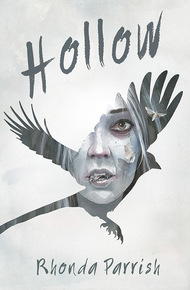 Like a magpie, Rhonda Parrish is constantly distracted by shiny things. She's the editor of many anthologies and author of plenty of books, stories and poems (some of which have even been nominated for awards!). She lives in Edmonton, Alberta, and she can often be found there playing Dungeons and Dragons, bingeing crime dramas, making blankets or cheering on the Oilers.

A car accident shattered sixteen-year-old Morgan's family. Now her brother's dead, her mom's paralyzed in more ways than one, her dad lives at work, and her seven-year-old sister Amy tries too freaking hard to salvage everything. What's more, high school is its own special kind of hell, where her ex-boyfriend delights in spreading rumours that shred her reputation and make her feel like a loser.

When she finds an old camera in a creepy abandoned hospital, it seems like her luck is finally changing. And it is changing—from bad to worse. Because of course it is. Each time Morgan photographs one of her classmates they become corrupted versions of themselves. It's like the camera steals their goodness, their essence, and leaves them hollow.

Then her sister uses the camera to take a selfie.

No matter what the cost, Morgan will find a way to reverse the effects of the cursed camera and save Amy, before her already-fractured family completely self-destructs.

Oh, hey! I know this book! It came out right at the beginning of the pandemic arriving in my country, when the idea of trying to sell anything felt disrespectful and weird, so I've decided to give it a re-launch as a part of this bundle. I think it's pretty good… but I might be biased. – Rhonda Parrish

It's a soothing, strenuous sort of relaxation that clears my mind until all that's left is sound. My feet hitting the pavement, my breathing loud in my ears, and an occasional bird. The sound of traffic is a dull hum in the background but I haven't seen a moving vehicle the whole time I've been running laps. It's getting late. The sky is bruising and the streetlights are coming on, but their light is dim.

I can smell autumn's bite in the air but I'm too warmed up from my workout to feel it. My hoodie is tied around my waist, its hem slapping against the back of my knees as I run.

Left-right, left-right, one-two, one-two. I focus on those numbers like I never do in math class, letting each one grow to fill my mind and push everything else out.

As I round the northwest corner of the decrepit hospital grounds, a voice slips through the barrier I've erected around my thoughts. A very specific voice.

"Shit." I glance one way and then the other. Sound is weird around my neighbourhood; the old hospital and its outbuildings grab noises and toss them around like finger bones in a witchdoctor's spell so I can't tell where his voice is coming from.

Then I catch sight of him, him and his friends. They've turned the corner across the street and are walking toward me.

If you've gotta go down, go down fighting. That's what Mom used to say.

Willing myself to ignore them, I fasten my eyes on a distant light pole and keep running. My jaw is clenched so tight each step jars my teeth, and the block, which is doubly long on this side of the hospital, has never felt so huge before. I just want to go home.

The boys' conversation stops and, after a brief pause, is replaced by whistles and cat calls. Keith, Darian, and Simon are hooting and whistling like a crew of construction workers. Assholes.

"Lookin' good, Morgan," one of them—Darian—hollers.

I feel the heat of embarrassment flood my face and force myself not to look down. Not to let them see how much they are getting to me.

"Run, run, run," Keith shouts. And though the words are benign, it is him saying them, and the tone he uses colours them and turns them into something dirty. Something shameful.

I should have run that day. But I didn't. Maybe this is my penance.

One foot in front of the other.

I want to get home.

Away from the whistles and hooting.

Away from Simon shouting, "Look at her titties jiggle!"

They sound closer than a moment ago. Surely they aren't—I sneak a glance out of the corner of my eye, refusing to turn my head, to give them that satisfaction. They are still on the other side of the street, but Keith's body language screams that he's about to cross. No, no, no. I just want to get home.

I see their shadows, long in the pale evening light, stretch across the road. Coming toward me. Their limbs, long and distorted, reaching . . .

My heart slams in my chest. What will happen if they catch me? The thought of them touching me turns my heart into a drum, my belly into a mass of worms, tangled and squirming.

I need to get home. Without letting them see their effect on me—if they know, that will only make things worse. Like blood in the water driving sharks into a frenzy.

But they are coming at an angle. Gaining on me. Keith's shadow has almost reached my feet when a flurry of soft sound and rapid motion beside me, on the hospital's side of the chain-link fence, startles me. Breaks my rhythm.

"What the hell is that? Look at that bird!" Darian says, and for a breath I feel their focus leave me.

It flutters on the edge of my vision, a bird like I've never seen before. It's the size and shape of a magpie but off-colour.

"Really? A bird? What do I care about a bird?" Keith laughs, as jarring as the quork of a raven. "What are you, a fag? Look at Morgan jiggle!"