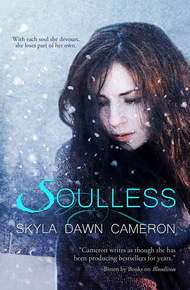 Her early storytelling days were spent acting out strange horror/fairy tales with the help of her many dolls, and little has changed except that she now keeps those stories on paper. She signed her first book contract at age twenty-one forRiver, a unique werewolf tale, which was released to critical and reader praise alike and won her the 2007 EPPIE Award for Best Fantasy. She now has multiple series on the go to keep her busy.

Skyla is a fifth-generation crazy cat lady who lives in southern Ontario, where she writes full time, works as a freelance designer, stabs people with double pointed knitting needles, is an avid gamer, and watches Buffy reruns. If she ever becomes a grownup, she wants to run her own Irish pub, as well as become world dictator.

You can visit her on the web atwww.skyladawncameron.com. When she's not writing or being glared at by cats, she's probably on Twitter. You should ping @skyladawn and tell her to get back to work.Exclusive content can be found at www.patreon.com/skyladawncameron

Anais Peake was created to devour the souls of otherwise unkillable monsters, but with every soul she eats, she loses a little of her own. She's been in retirement for eighteen months when her monster hunting best friend shows up one winter night needing help, and so Ani temporarily returns to a life she tried hard to escape.

Their plans go awry on a deserted highway when a harpy attacks and Ani's friend is killed. Ani is pulled out of the role of sidekick and thrust into the uncomfortable shoes of heroine in a mystery involving both human and otherworldly monsters, with only her neighbour/cat babysitter, an old friend still suffering grief and anger, and an empath funeral director for help to solve her friend's murder.

But fate has patiently been waiting: Ani was created with a purpose in mind and retirement or not, she has to face what she is and what she's capable of.

Even if her soul doesn't survive it.

I met Skyla through a mutual friend who said, "You're doing a StoryBundle about psychopomps and crossing over to the land of the dead? Have you talked to Skyla?!" And then when I approached Skyla and she described Soulless to me I couldn't accept it into the bundle fast enough. A woman who devours souls and crosses the veil on occasion? Yes, please! – Rhonda Parrish

The harpies' wails sounded above me, needles driving through my ears into my brain. They had heard me.

Simona's voice was in my head too, though. She wanted me on my feet. Get a weapon. Get back to the vehicle. Didn't care about pain, didn't care about trauma. Get up and move.

But I couldn't outrun those things. And if I miraculously did, the Jeep sure as hell wouldn't.

One of the harpies swooped down. I went for the sword, grasped the hilt in both hands, and rolled onto my back, blade pointing upward. It came at me fast and determined, but intelligence sparked in those rich amber eyes when its gaze settled on the gleaming silver blade. Great wings flapped and halted it in midair, and it hesitated there a few feet over me.

I felt Simona's dead eyes on me. Kill it, Ani. Stab through the heart. Slow it down. Take off the head.

But I was bad with swords.

I cast the weapon to the side. The harpy took its chance and dropped down to grab me again. I rolled out of the way as its talons neared, then grabbed one of its long hairy legs in both my hands. It wailed and tried to strike me with one huge wing.

My uninjured right shoulder rammed into the side of the beast. This threw it off balance, and I used that instant to pounce on it. We tumbled onto the ground next to Simona. My hands went for either of its shoulders, pinning it down, then I met its gaze and saw the hint of intelligence there again. The old team might have been able to interrogate it, somehow. Couldn't speak the language, but Prescott could connect with things. Maybe with help from Gail. We could have learned a lot.

But the team was gone. Simona was gone. And that chasm of loss in me widened.

I opened my mouth, but a scream didn't pass my lips. No, it was another sound entirely—something that didn't register well to human ears. But the harpy heard it. Eyes widened and it struggled, but nothing helped.

The smell of sulfur rose. And tar. And singed hair. And all the other scents that give you a sick feeling in your stomach and warn you're crossing a line into something completely evil.

Color seeped from the world around me, then grew red—very red. Blurry and red and hot, like we were caught in a big dark ember. And then my thoughts grew few and faded. I was something else entirely now—an instinct buried deep emerged and felt around the harpy. It was there somewhere. It was always there.

A thread. Winding in and around the body. Personality, emotion, consciousness. The soul.

I grasped it. Not with my hands. I never know with what. But I grabbed the thread and pulled with everything in me.

It came loose from the body, springing a little like an elastic band. Vaguely resembling the shape of the harpy, it glowed a dark orange and hovered there in the air.

I breathed in through my mouth. The thread tried to whirl away, but strength swiftly left it; the soul went limp and slid toward me. It gave one single kick, then settled. Accepted its fate. As the thing entered me, nausea and dizziness rose. The hot red dissipated, and the world returned to normal.

Normal. As if anything ever will be again.