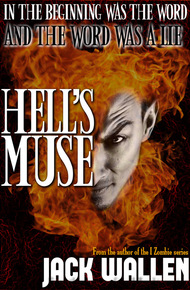 In the beginning was the Word - and the Word was a lie.

A struggling writer dives into the dark pits of madness to create his most perfect work - a parallel of his own life, only twisted into a malignant hatred. When the written word opens a gateway to Hell, every truth the writer believes is challenged, every lie made truth.

As a trail of death and sorrow spills from the words, the writer is drawn into an unholy abyss to become Hell's Muse.

Wallen has a gritty style, ones that pulls the reader deep into the characters. He captures perfectly the madness that comes with writing, and the degree to which writers can lose themselves in their work. The addiction, the extremes, the manic moments of thin victory, all captured as the main character spirals downward to write his best work. – Martin Kee

I hate you. I always have. Although I played the game and pretended to appreciate and requite your every adoration, the truth is... I hated every moment of every yelling, screaming, crying fan. It wasn't misogyny, fear, or phobia; I just hated you. And no matter how much I wanted to love you, no matter how heavy handed I played the game, the hatred still wanted to vomit from my heart and gut and spill down your outstretched hands – those hands that wanted to brush against greatness.

And yet you clung to my every word. I could fill a book with dreck and you would shell out your hard earned money and beg for more. But I didn't. Brilliant words poured from my fingertips like booze and prayer at a Catholic wedding. No matter your taste, you stood in line to buy, buy, and buy.

My tomes of terror sucked you in and it was a thing of perfect beauty. When a new book by Bronson Coulter was announced, women stood in line for days. The second I was sighted, panties and promises flew from every angle.

Never before had a writer of horror been so hot. At one moment in time I held the top three spots on the New York Times bestseller list. I was the darling dear of every bookstore in the country. My oeuvre couldn't be restocked fast enough. My agent worked sixteen hours a day. I bathed in money... your money. It was the only part of you I ever wanted.

I hated you. Did I mention how I despised you?

Really, all I ever wanted was to live my dream – pen my nightmares in the privacy of my home. My fantasy was a 24/7 pajama party and I was the only one invited. But that's not how it happened. When The Devil's Heart was released, it was the first horror novel by a debut writer to break the NY Times top 10 within the first week of release. Baal's Promise debuted at the coveted number one spot. Every novel after that enjoyed equal adoration from millions of parasitic fans.

Everyone wanted a piece of me. My life was no longer mine. I had to do signings, showings, viewings, panels, conventions, speeches, photo shoots; the flash of film never seemed to end. All of it made me hate you even more.

But you had your revenge. My time in the spotlight died a death worthy of my fiction. It bled out on a cold, stone floor and I would go on to suffer the single thing I feared most – obscurity. I became nothing more than a whisper in the shadows, pulp in a bargain bin.

Do you remember this writer?

Oh, I thought he was going to be the next...

What was worse than the adulation drying up was the flow of cash. I went from doing rails of coke off the asses of the most expensive whores in New York, to scraping up enough change to treat myself to pizza delivery. My bank account, savings, investments, retirement... all gone. My net worth was officially zero. The only thing of value I had was my Montblanc pen – the same utensil that had penned every first draft. The pen had helped me write such magic over the years. She had to have something left in the tank. Something. Anything.

I never stopped writing. In fact, once the ashes were swept away from the great crash and burn, and my agent dumped my ass like a clap-filled cock, my brain puked out some of the most intense, mind-fucked horror I could ever hope for. But no one wanted me. Agents, publishers... hell, I couldn't even cobble together enough cash or interest for a vanity pressing of what I was certain would be a dark horse hit.

My old agent refused to return my calls. New agents slammed their doors in my face. I was little more than a pariah, an albatross around the neck of the publishing industry.

No one wanted me. No one wanted horror. Fear had dried up to give way to fluffier, sparklier, hunkier, delights. If a book didn't shine with the sheen of paranormal romance, no one wanted it.

I self-published. Nobody cared.

I gave away my books. Nobody took the bait.

I pimped and I whored – I did everything imaginable to sell a fucking book, but nothing worked. My wares were yesterday's shit.

Some strange switch had been flipped. The cold, crooked finger of fate flipped me off after turning out my light. But nothing lasts forever. I knew my time would come back around. One way or another I would have vengeance over those who'd scorned me.

Little did I know just how painful and powerful a bitch revenge could be.

Read on, if you dare.