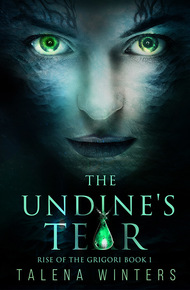 Talena Winters is addicted to stories, tea, chocolate, yarn, and silver linings. She writes page-turning fiction for teens and adults in multiple genres, coaches other writers, has written several award-winning songs, designs knitting patterns under her label My Secret Wish, and is lead writer for Move Up magazine. She currently resides on an acreage in the Peace Country of northern Alberta, Canada, with her husband, three surviving boys, two dogs, and an assortment of farm cats. She would love to be a mermaid when she grows up.

The Undine's Tear by Talena Winters

Calandra is the most powerful undine healer to be born on Sirenia since the woman who sank Atlantis three millennia ago—the only one with a hope of healing the Heartstone that hides their civilization from the human race. But since all the powerful healers go mad, she is terrified of repeating history. When the first undine man Calandra has ever seen promises to help her, she thinks her prayers have been answered. But beneath his smooth surface, something sinister lurks.

Across the sea in England, Zale is on the run from the merman identity he wishes he could leave behind. When a beautiful sphinx tells him he is the last male of his kind, he finds himself on a quest to save his mother and the sister he's never met from an Order as old as the Earth itself. But if he can't control his fearsome elemental powers, he may destroy everything he's trying to save.

Meanwhile, a cryptic message forces Calandra to confront her questions about her people's past. But the more she learns, the more tangled her loyalties become. When the horrifying truth is finally revealed, will she choose her duty to her people or the freedom of the human man she loves?

And the Madness is calling…

In this compelling and original young adult science fantasy, join merfolk, sphinxes, dragons, and humans in a fight that will determine the fate of the world... they just don't all know it yet.

"What are you waiting for, Calandra?" Narcissa goaded, sneering. "I thought you said healing a fern would be easy. How will you ever heal the Heartstone if you are so easily cowed by a mere plant?"

The princess stood above Calandra, her arms folded across her turquoise-blue siren cadet's tunic, her alabaster face distorted by a gloating smile. A red hibiscus in Narcissa's intricately plaited blond hair marked her as the heir presumptive, formal or not.

She could have the title, as far as Calandra was concerned. She only wished her cousin were better suited to rule. But she'd be chained if she'd allow Narcissa to think her weak. Maybe she could use this stupid wager to her advantage.

Calandra glared at Narcissa and adopted a bravado she didn't feel. "Do you want me to heal this fern or spar words with you, dear cousin?"

Narcissa barked a laugh. "Frankly, I think you too weak and dim-witted for either, though I seem to be the only one who can see it. This is your chance to prove it to the world."

Afternoon light poured through the open windows and glass ceiling, glinting off the water and scattering diamonds onto the faces of the ring of students in dripping swimming outfits that surrounded her. Nervous, excited whispers passed between the girls like the tropical birds that flitted between the fruit trees in the atrium. Hovering behind them, Osaze's mother, Urbi, stood in anxious silence, as transfixed by the confrontation as her charges.

Calandra arched a brow at her cousin. "And if I succeed?"

"I already told you. You can have your pick of my closet. The last time I looked into yours, I was almost embarrassed for you. Not that I fear giving up any of my gowns today."

Calandra shook her head. "No."

"You heard me. If I wanted something as frivolous as a tunic, I could have one. Aunt Adonia would see to it. I want something else."

Calandra gave a firm nod. It was worth a shot. "If I win, I want to trade bodyguards with you."

Narcissa's nostrils flared. Her gaze flicked toward the two tapeinoi standing at attention at the edge of the courtyard. Calandra knew Narcissa had only wanted Osaze as her own because of Calandra's connection with him. But, try as she might, she had never been able to find a legitimate reason for Narcissa to let him go.

A sliver of doubt crept into Narcissa's expression. She dropped her gaze to the plant, seeming to reconsider.

"Come now, Narcissa." Calandra narrowed her eyes. "If I am risking a week of cleaning lavs for you, you must risk more than a pretty gown for me."

Mari, a sixth-year siren cadet and Narcissa's ever-present shadow, shook her head. "That plant is deader than my great-grandmother," she scoffed. "You'll be off the hook for latrine duty for sure, Narcissa."

Narcissa smiled with renewed confidence and tilted her head at Calandra. "You think I don't know about your infatuation with my doulos? Fine. I agree to your terms on the condition that when you lose, you never try to take him from me again by any means. But I have little to fear. Osaze will be crossing deiktes with me later, not you."

Trust Narcissa to think that sparring with Osaze would make Calandra jealous. While Calandra's ability with Tropos Hydor Zon, the Way of Water, was passable, she did not have near the obsession with studying combat that her cousin did. She saved that energy for more scholarly pursuits. But then, if Calandra's skill with the elements were as limited as Narcissa's, she'd probably spend more time in the training ring, too.

Calandra smiled sweetly. "Don't worry, cousin. If you enjoy sparring with him that much, I'll let you borrow him once in a while."

Narcissa narrowed her eyes and said nothing.

Calandra frowned at the pot. This plant was further gone than any she had worked with before. The fern's fronds were nothing more than rattling, skeletal stems with leaves she dared not touch, lest they crumble off.

She glanced up at Osaze, whose unfocused stare condemned her by its very lack of accusation. For five years, she'd been looking for her chance to fulfill her promise to him, but the timing had never seemed right. Not to mention, Narcissa blocked her desires at every opportunity. At last, she could get one step closer.

If only she could do the impossible.