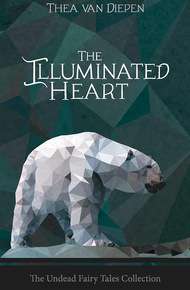 Thea van Diepen spent the first ten years of her life on a tree-wrapped acreage where an inquisitive child might believe in magic. Nowadays, she lives in Edmonton, breathing life into characters and worlds and the stories they tell.

She's been published in the Tesseracts anthology series, and her works include the White Changeling series, The Illuminated Heart, and the interactive short story The Tree and the Grave.

Dagný's only brother, Kaj, is dead. He died of illness before his life had really begun, and Dagný blames God for it.

About a week after his death, Kaj comes back as a draugur, a creature intent on the ruin of those it had known in life. With his unholy power, he kills their crops, causes their animals to go insane, and brings them to the brink of starvation. Every single member of Dagný's village, convinced that her family has brought this curse upon themselves through sin, leaves them alone to die.

Then, one day, a polar bear arrives at their door with a proposition:

"Give me your youngest daughter, and I will make you wealthy."

The adventure that follows thrusts Dagný into a world where the supernatural intrudes on the natural as a matter of course, where she must act without any assurance of safety, and where she must decide whether to throw away all she's believed or finally trust in it for the first time.

I love draugur as well as the idea (in fiction) of a beloved person coming back from death as a force of destruction. This book has both. While lacking a technical psychopomp, several of Thea's characters can cross the veil between the living and the dead and are happy to take the reader along with them. – Rhonda Parrish

The bearers lowered my baby brother feet first through the grave-door and I felt nothing. Not yet. Around me, my family and members of our village murmured prayers while they wept. A wind started, spreading cold like knives, but I only wrapped my shawl tighter around me. Winter edged the air; prophesied by the wind and sky.

As the bearers settled my brother into his barrow, I tried not to think of how small he was. There didn't need to be so many bearers, but they were all my father's closest friends, and they wanted to do honour to him at the loss of his only son.

They withdrew out from the barrow's entrance, picked up their tools, and began bricking up the doorway. Auðun, my father's gentle younger brother, was having a hard time keeping his hands steady, and left some of the bricks crooked. The others silently straightened these when they noticed them. At one point, he stumbled and kicked a small hole in their work, his face wet with silent tears. My father went to him, but Auðun shook him off and replaced the bricks.

When the grave-door had been sealed, Símon, the priest, sang a hymn. He had spoken against my father's plans for a barrow, denouncing it as a pagan tradition, but my father had wanted his son to be buried like a Viking hero, treated like a king of Iceland. Seeing that my father's only motivation was his love for his son, Símon had relented, so long as the entrance to the barrow was closed against any evil that might gain power through such a burial.

The hymn fell on me like a slow, pounding rain. I only wanted to be out from under its touch.

Its strains slowed to a trickle, then stopped. Our gathering disbanded and I followed my weepy family home.

After I helped my mother and sisters make dinner, I ate in attentive silence, though my mind had strayed to the hills outside our farm.

While washing up, Mother noticed my restlessness.

"Go on," she said. "Your sisters and I can manage the rest."

I ran from the house, past my father's fields, up and up until I had crested the hill at the edge of the farm and the land spread out before me, wide and hard and empty. The wind arose, tugging my hair away from the sun's lingering warmth, and I followed it down the embankment to the place where rock met the curve of the river. Running my hand over the familiar stone wall, I picked my way along the narrow shore, still following the breeze despite its loss of strength behind this shield. I reached a trail of stepping stones, crossed the river, and climbed up the other side.

The sky spread over the hills, raked by thin, grey clouds that seemed to reach like claws from the distant mountains, carved of light and darkness in the face of the setting sun.

'Hearing another means ceasing to speak,' my grandmother used to say, so I held back my words and let the silence fill the sky like a tangible thing, thick and heavy. My spirit raged, but I held to as much stillness as I could, giving a space for the words I craved. Stiff and straight as an aspen, I strained to listen until my back cried out for release.

"So, you would leave me here, then? You're the one who promises good things; the one who says he will protect and prosper his children. Have you forgotten that? No, you gave my mother and father a child of prayer and, when death took him, you did nothing. Are you so different from us that you have no heart, that you would not even shed a tear while we ache with loss? I have been very wrong, if this is so." Thoughts of how my parents and Father Símon would speak of God and his love rose in my mind like a soft fragrance, shy in the face of the fire within me. I squatted on the grass, letting my back relax for a moment before I turned away from the mountains and sat down.

"You have to give my father another son. I know Mother is getting too old to have children, but you gave Sara and Abraham a child when she was ninety-nine and he was a hundred. You gave them Ísak. You can give me a brother." My feet dangled down the escarpment, heels brushing against the brittle stone and stray clumps of grass. I pulled out a few green blades and broke them into pieces as tears pushed against my eyes. "Finally, I thought, finally there'd be a boy in the house and we'd be complete. Someone my sisters and I could dote on, who Father could take out into the fields and teach how to be a man. Someone Mother could kiss and call her sweet boy. It didn't even matter that he was sick for so long. He'd get better; he was from you. But he didn't." I threw the bits of grass down into the river, but they hit a jutting rock first and stuck there. The tears slid down my cheeks and I didn't try to stop them. Wind teased at the bits of grass, shifting them as I stared with a mind blank and a heart turning like the handle on a well. I couldn't tell if the water was coming or going.

"Fine. Say nothing, but at least show me a sign." My spirit grew firm. "You owe me that much, at least, while I wait for more. In a moment, I will stand and turn back towards the mountains. Show me something that will tell me what I need to hear." I inhaled, tense.

He wouldn't show me anything.

No, I couldn't accept that. He had made the fleece wet when Gídeon had asked, and made it dry again when he had called for proof that God was with him. I had asked for nothing so specific; nothing so impossible. God would come. He had to come.

Taking another breath, I stood, brushed the dust from my skirt, and turned around.

At first, I could see nothing, but I wasn't willing to let God get away so easily, so I looked harder. Out among the hills, coming across them at a great speed, was a white animal. It was just a sheep, certainly, but, as it came closer, I began to realize that I was watching the approach of a bear. A polar bear, savage and wild, and I was most definitely its target.

I hiked up my skirt and ran, ran, ran. The bear was far enough away that I could escape it, or at least its sight, and get to safety.

The river should slow it down, I thought as I raced across the stepping stones and back along the bank. It would have to ford the waters. They aren't as strong now as in spring. The flow should still be enough. It should be.

Returning to the hill above my family's farm, my heart sped at the sight of my house, and the thought that I had not escaped danger, that I was bringing it home. But looking back would slow me down. I could do nothing more than listen while I raced past the fields, listen with wide ears for the sound of bear footfalls hiding in the voice of the wind.

There! There! My hands fumbled at the door, before I crashed through and cried out for my father. Then, with the house at my back and the sound of my father running to me, I searched the hill for the bear.

"Dagný, what's wrong? What is it?" My father stood behind me, following my gaze. But he saw what I did: the sky and the land, the place they touched, and nothing more. "What's wrong?"

My heart broke, finally, and my father caught my limp body before I fell to my knees with weeping. He held me close and stroked my hair, trying to soothe me with a shaking voice and cracked words that I didn't hear.

Kaj Arasson, I will miss you.