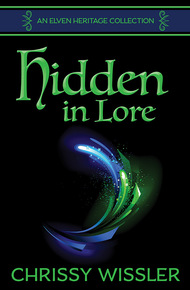 Hidden in Lore by Chrissy Wissler

She knows nothing about her mysterious heritage.

The first four stories in the riveting Elven Heritage series by bestselling author, Chrissy Wissler. Magic and mystery, mythical creatures and a long lost race of elves. At the center, a young woman brave enough to find the truth—and herself. Included in this collection: "Hidden in Mist," "Hidden in Truth," "Hidden in Shadow," and "Hidden in Fire."

Chrissy Wissler is a heck of a writer. With each story, she gets better and better. Her Elven Heritage series shows all of her storytelling chops to great effect. You'll get four stories in this volume, and I think you'll like every one of them. – Kristine Kathryn Rusch

There was no way Kate was setting foot in that forest.

Not with those pines…those trees practically drenched in mist. No, as if the mist were seeping from their trunks and branches.

As if they were one and the same.

Their needles so dark they looked almost black. Disappearing right into that mist and farther up…so far up she couldn't see where the trees stopped and the sky began.

If she just gave it a minute, she was sure it'd open up and drop buckets of water on her, her mom, and this crazy idea about hiking at Mount Rainier when, as far as she was concerned, it was still in the middle of winter.

Even if there was no snow…right at this particular spot.

Kate gripped the worn, fraying strap of her backpack. Hands cold, numbed. She almost wished for the heavy, pressing weight of books. Of her classmates. Of what they said behind her back.

Cold, unwelcoming eyes slanting towards her.

Not to mention the single, itsy-bitsy trail cutting into that forest—boot-packed dirt mostly covered with green stuff and leaves—that she was supposed to follow. As if this were no problem. Head right into the creepy forest that was sending her stomach twisting.

Making the hairs on her neck stand up on edge.

Those trees were actually bending towards her. She could hear the creaking of bark as it twisted.

Her breath puffed out in a white, cloudy mist.

Her mom was crazy. Insane. This place was supposed to make her feel better?

But seriously, if the creepy factor wasn't gonna clue her mom in, you'd think the emergency vehicles and rescue guys behind her would do the trick.

Kate glanced over her shoulder. The dozens of men and even a few dogs, making their way to the visitor center and back country office. Two buildings that looked like they'd fought tooth, nail, and floorboard for this spot in the forest. Their brown coat of paint, now flaking and peeling, was clearly the loser of that battle.

There were a lot of rescue workers, she noticed. All with strained faces. Conversations nonexistent.

Part of her wanted to know what had happened. Was it a rescue or a recovery?

But the other half, the part of her that looked at this forest, part of Mount Rainier and the National Park, with its misty claws and twisty trees, that half…didn't want to know.

Was afraid to know.

Every parking space was taken. Vans marked "Search and Rescue" parked on the squishy mountain grass. In between long, skinny trunks of pines. Squeezed in so close there was barely any room to open a door.

With all the trees.

Pressed around her. Bending towards her.

She wasn't imagining things…was she?

Kate's hands reached up. Automatically. Without thinking. Slipped free strands of blond hair from her ponytail. Covered her ears.

Kate shoved the memories—Heather's words—as far from her as she could. Stomped her boots. Her toes still numb even with the double layering of scratchy wool socks.

She was fine. Totally normal.

There was nothing wrong with her.

Just like there was nothing wrong with the creepy forest of doom.

She gave that forest another look before turning, half hoping she could convince her mom this wasn't such a great idea.

Not that the three-hour drive from Seattle had done a thing. Seattle, where they'd been living only a few short months before the whispers started again and her mom, as usual, got this strange look on her face. This constant uneasiness that drained her of color, making her look all hollow-like. At least until she'd decided to come on this stupid hike in the first place and then bam, there was rosiness in her cheeks again.

Which still didn't change the fact that in a month, maybe two, her mom would throw in the towel and they'd head back to Montana. 'Cause no matter what her mom did, she couldn't escape.

Kate headed up the gravel road—which turned into a cobblestone path (though, to be honest, at least half the stones were MIA). There was her mother, fully decked out in hiking gear (which Kate hadn't known they'd even owned), sporting a warm, purple jacket with matching pants. A jacket that hugged her curves in all the right places…nothing like Kate's bulging jacket, which had a thing for making her look like a whale and not like a filling out (slowly) teenage girl.

Her mother, who was determined—for whatever reason—to see this little mother-daughter hike through.

Even though her mother hated the forest. Hated trees.

Her mom was making her way closer to the command center (the only park visitor that Kate could see) and the thick throng of rescue guys in jackets (bulkier than hers, if it were possible). They didn't seem to notice her mom. Not with walkie-talkies glued to their hands and all eyes focused on the linebacker standing in front of a map, leading the charge.

A map that had a couple dozen pins of different colors. None, Kate had a feeling, that were good.

Her chest tightened. Felt like her heart squeezed between beats.

Why couldn't they just leave? Forget this stupid trip that was doing—absolutely—nothing to help Kate forget. Couldn't. Not when she could easily hear the visitor center's creaking welcome sign. Could hear it so well, it was as if she stood underneath it and not at the tail end of the parking lot. Or the muted, hushed conversation taking place at the command center as plans were made for another day of search. And recovery.

To find the missing girl.

That was her name. A girl who'd been last seen near Indian Henry's Hunting Ground Trail, following right behind her friends, and then was gone. No trace. No sign. Nothing.

Kate bit her lip. Tried to keep from listening.

Just like before. With Heather, who she'd thought, even for a moment, was her friend. Not best friend, but the first person who'd given Kate a smile and showed her where her locker was, and homeroom, and the fastest way out of school as soon as the ear-splitting bell rang.

The tall man with pretty impressive football shoulders, sporting a piratical eye patch, stepped forward, and the rest of the Search and Recovery group came to him. Silent, watchful, as if they were all under some sort of spell. Probably fear for the girl. Alice. His face was a road map of wrinkles and scars, one jagged one running right through his eyebrows and straight on down. She'd a feeling there was no eye there, just an eye patch. Why she thought that, or why she just knew, she had no idea. It was just a feeling, just this... certainty.

"We've searched the twenty-three miles where Alice was last seen," he said. "Both man-and dog-teams. The kids say she was last spotted here."

He pointed to a blue pin, finger just as huge as those arms.

"So far, the canines haven't caught a scent. No sign either. Not anywhere off the trail. No broken branches. No footprints."

He focused his attention on each man and then the one or two women awaiting their orders. Then stopped suddenly. Kate realized her mother lingered on the outskirts of the group, just outside of normal hearing range, but he wasn't looking at her mother.

No. He was looking at Kate.

Saw Kate, and only Kate.

But his gaze didn't. It held right there, right on her, and he just kept on staring across the heads of all his workers as if he knew...

That she could hear.

Kate swerved on her boots, digging into that half cobblestone, half gravel path. Fast. She dug her now-numb hands deeper into her jacket pockets as if all that would stop the voices. As if she ran far enough and stuck her fingers in her ears, it would all go away.

His voice continued, following her. "The helicopter hasn't seen her either. It'd help if the weather held, but that fog…"

Deep. Baritone. As if it knew it was delivering bad news but did it anyway. Had to.

"I'll be honest. It's not looking good."

Kate's throat closed. Locked the air in her chest. Even as the fear tightened. Held on.