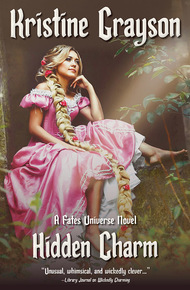 When a Charming Prince named Sonny rescues Rapunzel from her tower prison, she rides off with him and gets on with her life—her real life in the Greater World. They set up a home in Los Angeles, and she begins to discover the strength of her magic.

But when Sonny disappears, Rapunzel needs help finding him.

Enter Henry, the Frog Prince, who works the front desk of the Archetype Place. Only Henry can help Rapunzel find her husband because of the vast power it took to conquer Sonny. But Henry wants nothing to do with Rapunzel or her problem. He fights enough of his own.

A typically fun Grayson romp through the world of magic and love.

Most of you already know that I'm Kristine Grayson. With that pen name, started long before the Kindle was invented, I write goofy urban fantasy based on Greek Gods and fairy tales and whatever else my rather bizarre brain slams together. Here you'll find Rapunzel and The Frog Prince in Los Angeles. Because, y'know, that makes sense. – Kristine Kathryn Rusch

Henry, Prince of the Eighth Realm and Husband-Consort to Tiana, the youngest daughter of the king of the Seventh Realm, sat on the edge of the gigantic bed in the birthing room, hands over his face.

Around him, the midwives worked their magic, touching his beloved wife's face, coaxing her to speak, caressing her stomach, which looked weirdly flat.

The baby's body had already been removed, per custom. Too young for revival techniques to work, the midwife—whose name Henry maybe had never known—told him. She seemed businesslike, maybe because she still thought her magic could save Tiana.

Candles burned all around, smelling of vanilla, almost masking the scent of the sharp spice that the midwives were using to try to bring his beautiful, beloved, brilliant wife back to life.

The room was cavernous, but it felt small. The tables on the side were covered not only with candles, but with equipment, some of it metal, which looked more like torture devices to him than anything that could help a woman give birth to a baby.

He certainly couldn't. Nor could Tiana's maids and helpers. The Queen had fled early on, which angered him more than he wanted to say. He thought women were supposed to know these things, but apparently, she had asked to be unconscious during the births of her six children.

He had stayed, Tiana clinging to his hand, trusting him to help her, and he knew nothing, nothing at all.

And then the chief midwife, as she arrived, glared at him.

You stayed? No wonder the child died. Men should not be here. Your presence harmed both of them.

She tried to get him to leave so she could revive his wife, but he wasn't going to—for two reasons: First, he couldn't bear to leave Tiana's side—he kept expecting her to open her eyes and smile at him. Just fooling, she would say, because she had such a marvelous, quirky, and slightly vicious sense of humor. But second, oh, second, he had seen what happened when people were revived after being dead for more than an hour, and those people—well, they were never the same. He once contended, back when he could actually do battle, before his own family sacrificed him for his brother's sake, that those people weren't the same. That they were something other than human, something that had a weird and dangerous magic all its own.

He knew that he was holding two contradictory thoughts in his head—the idea that Tiana would wake up and the idea that he needed to protect her in death as much as in life—and he didn't care.

He would protect her. It was the last thing he could do for her.

He stood, wiped his hands on his pants, and said to the bustling midwives, setting up for their spell, "Get out."

They didn't stop moving. Seven of them, which, he had to think, was an unlucky number. But the Seventh Kingdom was a lot fonder of the number seven than the Eighth Kingdom had ever been. So maybe seven wasn't unlucky here.

He raised his voice.

A couple of the midwives stopped moving. They were the younger ones, in training, probably. He hadn't gotten to know any of them during Tiana's pregnancy, and he probably should have. No, he actually should have.

He raised his voice again, moving it to a command level he rarely used:

"Highness," said the head midwife (were they called "head midwife"? He didn't know. Tiana would have known, and he could ask her…no, he couldn't. He couldn't ask her anything ever again). "We need quiet to revive—"

"It's too late for a proper revival and you know it," he said. "You're just afraid of her father. I'll deal with her father. You will leave. Now."

He could deal with Tiana's father, because it didn't matter. Nothing mattered anymore.

Tiana was gone. Tiana, who had saved Henry, loved him despite the spell that Aite had imprisoned him with. Tiana, who talked with him, and held him, and then helped him return to his human form, breaking the spell forever.

Tiana had saved him, but he couldn't save her.

The midwives were gathering their things, all except the head midwife, whose eyes had narrowed. She put her hands on her ample hips.

"She's too young to die," the midwife said to him, as if he had killed Tiana. And maybe he had. She had been tiny, too tiny for that baby inside her, the baby he had made with her. If he had thought about it—

"I know," he said, feeling that bit of energy drain from him.

"You would take her from this world forever?" the midwife asked.

Anger engulfed him so fast that it surprised him. Anger and the energy that came with it.

The midwife leaned back, her dark eyes glinting with an anger of their own.

"I will let her father know that," Henry said. "She would still be alive if you had been here. Our child would still—"

He couldn't go on. Not without losing any semblance of control. He closed his hand into a fist, then let it fall to his side.

This time, the midwife and her assistants listened. They swept the last of their supplies into linen bags and hefted the bags over their shoulders. The movement snuffed out most of the vanilla candles, leaving the cavernous room in semi-darkness.

The women scurried out, the oak door slamming behind them.

Leaving him alone with Tiana.

With what remained of Tiana.

He had not expected this. He had thought his life would change when the baby came. But he had thought he would raise his child with love and warmth, unlike his own parents had with him. He and Tiana would have more children, and they would laugh and play and run around the grounds like wild heathens until schooling started.

He had expected joy—a longer, greater, happily ever after than anyone had ever experienced.

He and Tiana used to talk about it, how wonderful their love was for each other, how lucky they had been that she had the patience to see him for who he was, and how willing he had been to try to capture her attention.

They had loved each other.

They thought love could conquer everything.

They had been wrong.