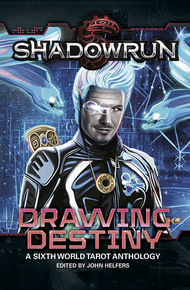 John Helfers is an award-winning editor and author who has been working in publishing for more than 20 years. He has edited more than fifty anthologies in various genres, written close to fifty short stories, twenty novels, and is currently the Executive Editor at Catalyst Game labs, publisher of official BattleTech and Shadowrun fiction. He lives and works in Green Bay, Wisconsin.

THE TAROT HAS AWAKENED…

The Tarot, a powerful divination artifact, has appeared in the Sixth World. It works its will on anyone who finds one of its mystical cards, from runners surviving on the street to corp executives battling in the boardroom. And not just people's lives will be changed, for the Awakened Tarot deck is more than just a formidable magic item, it has an agenda all its own, and will use those it comes in contact with to set its plans in motion…

The role-playing game Shadowrun has been one of the most popular tabletop games since it arrived on the scene more than 30 years ago. In addition to gaming modules, the game has spawned long-running fiction series—novels and anthologies. Drawing Destiny focuses on the tarot…in a way that only Shadowrun can. – Kristine Kathryn Rusch

ONE FOR THE OTHER

At first it was barely noticeable, like a light breeze or an errant thought echoing in the mind; nothing to pay attention to, and easy enough to dismiss. But instead of the echo fading away, it began surging and pulsing, like a distant heartbeat.

Rising from an ornate rug, she stopped and sensed. It came from everywhere, yet nowhere at the same time. Moments passed, and she felt the power growing. The echoes quickly became a call, words now with form and power. They were different, but she recognized them for what they were.

They were a gentle caress at first, almost inviting, a soft voice urging her to submit.

She resisted, pushing back with her will. She had earned her release long ago through pain, agony, and torment. She thought she had created a safe place, a hidden place in this small earthen cottage just outside Fez. Apparently, she was wrong.

The voice grew in power; it now demanded her submission.

Resentment, humiliation, and pain-filled memories ignited a hot fury within, and she lashed back now. And for a moment, the voice faltered.

Then it hit her, an opposing will struck back. She felt the blow almost shatter her resistance, almost to the very core of her being.

Again she resisted, but the assault was unrelenting. She knew her will would eventually crumble. Only one thing could do this, and the realization filled her with dread. But how had she lasted this long? She then realized that something about the voice was flawed.

The name—that was it!

Knowing what was coming, she saw what could only be described as a gateway through the metaplanes open, and unbreakable strands of magical power reach for her. Steeling herself with all the will she could muster, she anchored herself to her home as the mystical energies seized her. The pain was intense as her essence was literally and violently pulled across great distances like a rubber band while mystical energies formed the first binding links.

With the primary link formed, she now saw him. He commanded powerful magics, borrowed from a time long past, but he didn't recognize the flaw, the imperfection in his energies. Looking at him, she saw the primary link take the form of a chain that would bind her to him forever.

He simply smirked at her and continued speaking, his words an approximation of ancient Arabic.

Magical energies swirled between them and he symbolically reached out with his hand to pull her close just as a slave collar formed at the end of the chain. As she drew closer, the collar began closing around her neck.

It was a flash of steel and flame…and for the briefest of moments, everything went still. His eyes and mouth both widened, just before his head fell from his body. Magical energies then exploded, violently snapping her back.

Sometime later, she awoke in her cottage and gently kissed her beloved blade, which had served her well yet again. Alone and safe for the moment, she gathered her strength. Somehow, someone had found a way to forge a similar, yet imperfect, connection to the one she had broken long ago. That information was still out there, waiting for someone else to try again.