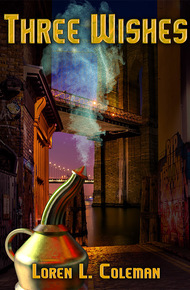 Loren L. Coleman writes fantasy and science fiction, and has twenty-five published novels including a relaunch trilogy set in the world of Conan called the Legends of Kern series. His full list of works are detailed on his website, lorenlcoleman.com, and he can be followed on both facebook and twitter (@lorenlcoleman). A collection of his short fiction is now on Amazon.

Three Wishes injects a belief in magic into the life of Brooklynn kid Erik Rodriguez, a smart and creative junior high school student dealing with real-life issues of separated parents, bullying, and trying to figure out how to talk to a girl he likes.

Erik's life changes the day he borrows an old lamp from the local antique shop. A gift for his mother. Not really stealing; Old Man Hasta had been willing to lend him another of the stores "treasures" after all. And a dusty, old metal lamp? What other use could it really have?

Enter Kalid, the djinni of the lamp, who teaches Erik that magic is more about belief in one's self than in outside forces.

When I asked Loren if he had a book for this StoryBundle, he mentioned Three Wishes, which came from a short story of his I had seen years ago. I still remember the story as wonderful. I'm glad he expanded it. The book is brand-new and our only exclusive. Loren, however, has been a professional writer for decades, with more than 25 novels in print. – Kristine Kathryn Rusch

The Brooklyn Heights mall wasn't quite as busy on Sunday, missing the church crowds. Erik promised to meet his mother at the food court in an hour, leaving her to look through the sales racks in JCPenney's while he shouldered his backpack and took a slow walk down toward Sweet Tooth. He took a wide path around the corner, saw the candy store and the bench outside.

Well, what had he expected? That a genie had actually come to talk with him yesterday and do a cheap magic trick before fleeing back to his lamp?

He swung his backpack off his shoulder, reached through the large opening and held it open with a spread hand so that he could look at it. Dark metal gleamed back from the dim interior. Glancing around, feeling a light blush coloring his face, Erik reached into the backpack and rubbed the base of the lamp. No static bite this time. Just cold, smooth metal.

He looked back at the bench. Still empty.

"Well, duh." He re-slung the backpack, wearing it over his right shoulder now.

The djinn walked out of the candy store, carrying a small bag of sweets.

"No way." Erik rarely talked to himself, but it happened. He brushed the man's appearance aside at once. "Coincidence," he said, but waited while the djinn—the stranger—walked over to his bench and folded himself back into it.

The man sat Indian-style again, legs crossed in front of him and dark coat bunched at his back. Hecarefully finger-combed his thick goatee, as if searching for something lost, then settled back to munch on whatever was in his bright-paper bag of candies. He glanced over, and raised his bag in invitation.

Erik walked up, pretending that he was really on the way to the Sweet Tooth himself. He still remained back a decent arm's length.

That was one way to reopen their conversation.

The stranger grinned, showing off strong, white teeth. "No, Erik. The lamp is merely a tool that summons me to the bidding of one who believes. Would you like a gold coin?" He offered the bag out at arm's length, pointing it toward Erik.

The paper bag was colored with red and blue balloons. The mouth hung open, letting Erik see a small fortune in sparkling gold coins. Each one was thicker than a foil-wrapped chocolate, and sat there with a weight that promised wealth and all the toys Erik would ever want to own. The edges where chipped and dented, but where the gold shone smooth it glowed under the mall fluorescents.

Erik reached into the bag without thinking, grabbed a coin, and pulled it out to see.

Shaking his head, Erik slipped over and sat on the far end of the bench. "I thought…"

"You saw a possibility," the man replied. Erik wasn't certain where he stopped thinking of the self-avowed djinn as a stranger. He might still be strange, but there was no menace. Not that kind, anyway. "You still got what you expected from a Sweet Tooth bag, did you not?"

"Yeah. But the real gold would have been cooler."

"And does that make the chocolate any less sweet?" the man asked, unwrapping his own gold foil coin and popping a disk of chocolate into his mouth. "Wonderful," he said with obvious pleasure. "A great wish."

"Chocolate is a wish? Mom said it was invented by monks."

The man smiled, a dark smear coloring one tooth. "Chocolate was a wish. The wish of a very holy man who asked for pleasure without sin."

Erik shook his head. "And you granted it?"

"No. That was Dalphin. A friend of mine."

"There's more than one of you?"

"Yes. And there are many djinni as well."

Erik was not a slow or stupid kid. It still took him a minute to untangle that last pair of answers, and then he decided to put them aside for now in favor of bigger—and better—questions. "You grant wishes, though. That is what you're saying. So if I asked for…I don't know…" he fished for an idea, remembered the picture from Old Man Hasta's shop, "that I wanted to be mayor of New York, let's say."

"I am a djinn, Erik, not a campaign manager." He swallowed, then curled over the top of his candy bag and set it between them where Erik might reach it if he wanted. Erik still held the gold coin he had been given. "As you have already seen, your own perceptions will color what is offered you. Also, I am bound by a stronger magic, that you may not be granted what is beyond your own expectations."

"I cannot help that unless you would like to wish for remedial english lessons." The man smiled at his own joke, and Erik found himself answering it, but still not believing. Not completely.

"Prove it," he challenged. "Show me something that would make me believe."

The man propped his elbows on his knees, cupped his hands together, and leaned forward to rest his chin in them. "I am here because you already believe. If there is something that you desire, you have merely to name it, and I shall prove myself."

Erik jumped up, full of energy as the possibilities—and the game itself to prove the man a genie or not—coursed through him. "All right. I know something I would like." He stuck the chocolate coin in his back pocket, still cautious, and walked toward one of the nearby sports card vendors. "Coming?" he asked back over his shoulder.

The dark-skinned man unfolded himself from his seat, following. The hem of his long, black coat trailed out behind him like a cape. He followed Erik to a fold-out table covered in black felt and a small locked case with plastic-sheathed Topps cards in them.