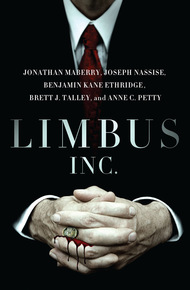 Anne C. Petty is the author of three horror/dark-fantasy novels, a Florida Gothic suspense series co-written with P.V. LeForge, three books of literary criticism, and many essays on writing, mythology, and J.R.R. Tolkien.

Joseph Nassise is the author of more than twenty novels, including the internationally bestselling Templar Chronicles series, the Jeremiah Hunt trilogy, and the Great Undead War series.

Brett J. Talley is the Bram Stoker Award Nominated author of That Which Should Not Be and The Void, as well as numerous short stories and a haunted history of Tuscaloosa, Alabama.

Are you laid off, downsized, undersized?

How lucky do you feel?

So reads the business card from LIMBUS, INC., a shadowy employment agency that operates at the edge of the normal world. LIMBUS's employees are just as suspicious and ephemeral as the motives of the company, if indeed it could be called a company in the ordinary sense of the word.

In this shared-world anthology, five heavy hitters from the dark worlds of horror, fantasy, and scifi pool their warped takes on the shadow organization that offers employment of the most unusual kind to those on the fringes of society.

One thing's for sure — you'll never think the same way again about the fine print on your next employment application!

The writers who came together to make this collection are no strangers to horror. Not only is this collection superbly written, but the stories are expertly told, weaving together, amounting to something reminiscent of old Outer Limits and Twilight Zone episodes. – Martin Kee

Ichabod Templetonhid in shadow, for the ones he feared walked in the light. He clutched a leather-bound book to his chest, eyeing the early evening revelers as they passed. They didn't notice him, crouching in darkness. Or maybe that was all part of their plan. Lure him into a sense of ease. Make him think that he had finally escaped their gazes. And then strike. No,Ichabod thought, shaking his head against the idea. He had come so far. He would not fail now.

He crept through the alleys and back ways of Boston, hiding himself in the maze of the city. But he was not lost. He knew where he was going, even if he had never been there, even with no map to lead the way. Something inside, some preternatural sense, guided his footsteps.

He found himself in the North End of the great city, not that he would have known the name of that place. He cut through the old burying ground at Copp's Hill, past the ancient, crumbling tomb of Cotton Mather, into the labyrinth of narrow corridors and side streets north of Prince. He stopped at the mouth of one and stared with sudden recognition at a ramshackle storefront. He had reached his destination. He pulled the old book closer, rubbing his hands along the coarse leather while the setting sun cast longer and deeper shadows than even the one in which he stood. Yes, this was the place. This was his destiny.

The antique grandfather clock—the one he had inherited from his father's father—struck seven, but Matthew Sellers didn't hear it. He stared at the blinking cursor on his computer screen, as if willing it to type some good news. It was well past closing time, and Matthew should have been home, tucked away in the garret that sufficed for a living space. But he always found himself staying late on the days he reviewed the budget, as if working harder would result in more income. But as his eyes scanned the black and red numbers in the ledger—the latter in greater quantity and size than the former—he knew that such was wishful thinking at best.

The used book store had always been a dream of his, as had the small-press publishing company he had started along with it. He'd created Unbound with money his parents had left him in their will, and at first, the store had been something of a cultural phenomenon in Boston's increasingly bourgeois North End. Unfortunately, like all such phenomena, Matthew's star had burned out as quickly as it had ignited. The elite moved on to the next distraction, and Matthew often wished he had opened the store in the Back Bay or on Newbury Street, even if he knew he could never have afforded it.

It had been bad for a while, but the last month had been particularly unsuccessful.

The door to the shop opened, and the antique bell Matthew had installed above it announced his visitor with an enthusiastic jingle. Even though he needed the business, Matthew looked up with every intention of turning the customer away. His mouth hung open, the words died in his throat when he saw the man standing before him.

He didn't know whether to pity or fear him. The man was one part professor, another part homeless derelict. His tan trench coat hung limp from his skeletal frame, splattered with mud along its edges. His soiled clothing and unkempt beard said he hadn't bathed in days or perhaps weeks even. But it was his eyes that held Matthew. Blue as the ocean on a summer's day, yet trembling in what Matthew could only assume was fear behind the wire-rimmed glasses of an artist.

"Can I help you?" Matthew stammered. It was only then he noticed the leather-bound tome the man hugged, clinging to it as if it were the most important item he had ever possessed. As if he feared that at any moment, someone would try to take it from him.

"Yes," the man croaked. "Yes, I think you are the only person who can."

For a long moment the two men assessed one another across the swirling dust that filled the space between them. Then something in the stranger's mind clicked, and he took a step into the center of the room. He held the book in his hands, reaching it out to Matthew as he stumbled toward him.

"This is for you." He placed the book on the desk, but it still did not leave his hands. Matthew saw a storm of conflicting emotions in his eyes. Finally he withdrew, and as he did, a wave of relief poured over his face.

The man glanced down at the chair, and just as Matthew began to doubt he would accept the offer, down he sat.

Matthew tried not to smile. He was sure it wasn't an alias. No one would be so creative.

He opened the leather cover of the book and immediately frowned. It wasn't an antique book as he'd originally thought. Instead, it was some sort of diary, one that someone—Ichabod,likely—had filled with his own ramblings. Some pages were nothing but handwritten scrawl, barely legible in parts. Others were poorly typed, while yet more had computer printouts glued or stapled on top of them.

"I wrote it in three days,"Templeton said. His hands shook and his voice was feverish. "I didn't eat or bathe, nor did I sleep. It was my obsession. It is my masterpiece."

"Mr.Templeton, I am sure you worked very hard on this, but I only purchase published books for the store. I am afraid I . . ."

"Oh, no no, you misunderstand, Mr. Sellers. I don't want to sell the book to you. I am giving it to you. I want you to publish it. The story I have to tell is far too important to be confined within the meager leather bindings of a single manuscript. No, the world must read it. The world must know what I know."

Matthew leaned forward and shook his head. "I don't think you understand, Mr.Templeton. There's a whole process to selling a book. I have to read it and like it. There are legal considerations, contracts to sign. Then we have to think about artists and titles and distribution strategy. And besides, I run a small press here. If you want the world to read your book, you'll probably want to take it somewhere else."

Templeton smiled for the first time, revealing yellow-encrusted teeth. "None of that will be necessary, Mr. Sellers. The book is yours now. I have no doubt that after you read it, you will want to publish it. And then, the world will see. They won't have a choice."

Matthew flipped through pages, suddenly convinced that it was better to play along with Templeton than anger him. He was a man on the edge, and at any moment, he could fall in completely.

"Writing the book wasn't easy," Templeton continued. "Sometimes I had to write by hand. Other times I used my old Olympia Deluxe typewriter. When I was lucky, I wrote on a computer."

"I guess I don't understand," Matthew said. "Why couldn't you just use your computer to write the book?"

"Oh, well, I was on the run most of the time. They were after me, of course."

Matthew closed the book and looked up at Templeton. "Now Mr.Templeton," he said as calmly as he could, very afraid of his guest, "why would anyone be after you?"

"So this is nonfiction?"

"It is truth,"Templeton answered without addressing the question, "distilled down to its finest essence. The line between fiction and nonfiction is a fine one, after all."

"But how did you come upon this story then? Do you have sources? Research?"

Templeton laughed. "Come now, Mr. Sellers. Don't you understand? I didn't ask for this assignment. It was given to me. By God, perhaps, though the origin is irrelevant. I was fated to complete this task. It is my job to reveal them, for what they are. I am the only one who can."

The man smiled again, and this time Matthew saw pity.

"Mr. Sellers, the world is a machine, and like all machines, it requires someone to run it. Otherwise, it would spin out of control. Things must be done, adjustments must be made, the system must be tweaked."

"You're talking about the Illuminati? Free Masons? Conspiracies and secret societies?"

"No, no Mr. Sellers. Nothing so quaint. And nothing so secret. They walk in the light, not the shadows. Secrets breed questions, and questions sometimes have inconvenient answers. No, they are all around you. Working every day. They are neither good nor evil, as such notions are normally counted by mankind. They stand on the edge of the pit, and stare down into its depths. They do what they must. They do what we cannot."

Matthew grinned, shaking head, no longer able or willing to contain his doubt. "I'm sorry Mr.Templeton, but I don't think I buy any of this."

Templeton rose from his seat and adjusted his glasses. "Read the book, Mr. Sellers. Read it, and then you will know. Belief will follow, as thunder follows the lightning."

Before Matthew could object, Templeton had turned and strode to the door. He didn't stop when Matthew called out his name. The antique bell rang again, and he was gone.

Matthew leaned back in his chair and looked down at the book that sat before him. He rubbed his hands along the leather, opened the cover, and started to read.